With Virat Kohli relinquishing T20I captaincy duties following India’s exit from the T20 World Cup, Rohit Sharma looks set to take over the duties at least in the shortest format.

Rohit Sharma is not the only likely candidate in the fray for captaincy with the likes of Rishabh Pant or KL Rahul too being tipped to take over the duties. 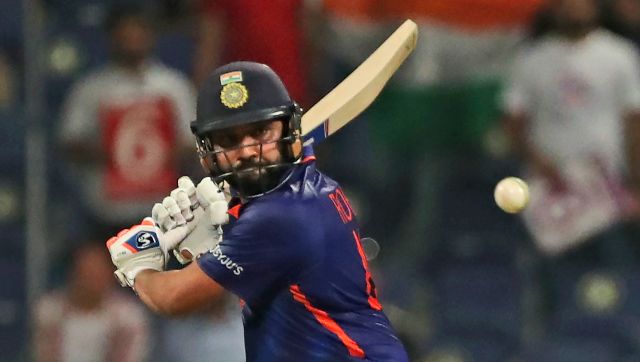 However, outgoing skipper Virat Kohli seemed to hint at Rohit Sharma becoming his successor, while speaking at the toss against Namibia, but Kohli isn’t the only one to back the Mumbai cricketer.

Legendary cricketer Sunil Gavaskar feels Rohit Sharma remains the ‘obvious choice’ to lead the Men in Blue, while stressing that the next T20 World Cup in Australia was just 12 months away., meaning there wasn’t any need to look at a ‘long-term’ option.

"Long term is in case the next World Cup is maybe 2 years away or 3 years away. Next World Cup is just 10-12 months away. You don't have to really look long term now," Gavaskar was quoted as saying by India Today.

India endured a disappointing outing in the T20 World Cup after losses to Pakistan and New Zealand in the first two games. Wins against Afghanistan and Scotland were not enough as other results had to go their way. Kohli had announced he would step down as T20I skipper before the tournament.

Rohit Sharma, meanwhile, is one of the most successful captains in the Indian Premier League (IPL), having led Mumbai Indians to a record five titles.

Gavaskar felt Rohit was the ‘best man’ to lead India to an ICC trophy, with the Men In Blue having won one last in the 2013 Champions Trophy under MS Dhoni.

"Right now, you have to look for the best man who can take India to an ICC trophy. And that is Rohit Sharma with his record for Mumbai Indians in the IPL, he is an obvious choice. I think he should be given the captaincy and maybe after next year's World Cup in Australia, maybe have a look at another T20 captain. But right, now it's only Rohit Sharma," Gavaskar added.

It is also the end of an era for the Indian team with Ravi Shastri’s tenure as India head coach ending after the final game against Namibia in the T20 World Cup. Rahul Dravid was appointed as India coach on 3 November after much speculation and his first assignment will be when New Zealand tour India next week, with the first of three T20Is beginning on 17 November.

Gavaskar opined, saying that ‘too many changes’ would not help the team.

"I think there has to be some sort of a change but not majorly. You certainly need fresh legs and fresh thinking. That will happen. Right now, I don't think we should be looking at making wholesale changes. Don't take the fact that we didn't do well in the World Cup lightly but too many changes won't help anybody,"

"India are going to play at least 20 T20Is before the next World Cup. So that's a great opportunity to give some players who you think can be there in Australia,” he added.

Jasprit Bumrah, Mohammad Shami have been rested from the series while KL Rahul will be available from the second ODI onwards. Deepak Hooda has also been named in India's ODI squad for the West Indies series.