PCB's compensation claim against BCCI not on ICC's immediate agenda

The PCB will most probably file its claim with the ICC at the next meeting which will be held after Auckland, said a PCB official as they still finalising the claim

Karachi: The Pakistan Cricket Board's plan to file a compensation claim with the ICC against its Indian counterpart (BCCI) is unlikely to see the light of day in the near future.

An official of the PCB told PTI that the Board's plan to file a compensation claim is not on the agenda of the ICC (International Cricket Council) executive board meeting in Auckland early next week. 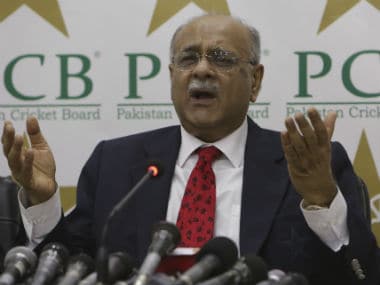 "No, it is not on the agenda and if anything Pakistan will put up this issue for finalisation at the next ICC meeting which will be held after Auckland," he said.

"The reason for this is, the PCB is still finalising the claim after continuing consultations with a legal firm in London."

The PCB chairman Najam Sethi and chief operating officer Subhan Ahmad will be attending the meeting.

Asked if it is correct that the PCB planned to file a compensation claim of around USD 70 million for two home series that India didn't play against Pakistan in 2014 and 2015, the official said: "The PCB will most probably file its claim with the ICC at the next meeting which will be held after Auckland.

"After which the world governing body has to appoint a three or four member disputes resolution committee to hear out the case."

While filing the compensation claim, the PCB would ask the BCCI to show proof and evidence that it did not get the permission of its government to play a bilateral series with Pakistan even at neutral venues.

"Pakistan's contention is that the BCCI must show through documentation and evidence that indeed it did try to seek clearance from the government to play the series with Pakistan at neutral venues but their government refused to give the permission," he said.

"Our insistence is simple that India's refusal to play us has cost us lot of money and they have even backed out of the MoU signed with us in 2014 to play six bilateral series between 2015 and 2023," the official added.

The official said that the legal firm in the United Kingdom has assured the PCB that the MoU constituted a legally binding agreement and it could claim compensation from the BCCI.