Pakistan team now has a more stringent approach to the whole discipline of monitoring intake of players and on reaching new fitness levels than ever before.

Gone are the days in cricket when you could be forgiven for being too tall to bend down in time whilst fielding on the boundary ropes, or be let off the hook due to those extra pounds accumulated over winter. Gone are the days when you could be a breathtaking strokemaker with a rocket of an arm but sliding to save a boundary just wasn’t your thing. Cricket has evolved and so have the nations to keep pace. Fortunately for Pakistan cricket, the young crop of players is second to none when it comes to this discipline of the gentleman’s game.

One just has to look at the performance of the home team in the recently-concluded Independence Cup to get a taste of things. In the finale, on a hazy September night, Shadab Khan was quick as lighting with his pick up and throw to run Faf Du Plessis out. Fakhar Zaman was equally clinical to make sure Hashim Amla went back to the dressing room. There was a whole new energy and buzz inside the field with pats and nods following every lunge and dive. 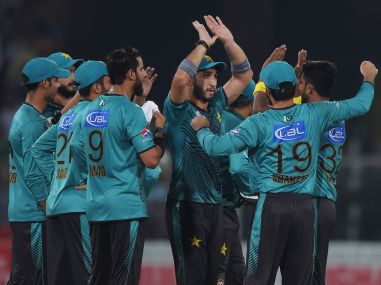 In the post-match conference, Du Plessis went on to say that it wasn’t the Pakistan team of old which you could think to beat on the field. The average age of the side being just above 25, exuberance of youth merits a major attribution but it is just the tip of the iceberg.

As one of the modern greats of cricket, Ricky Ponting, pointed out — fielding has a lot to do with fitness, and as fitness levels reach new heights in sports across the globe, cricket is no different. Pakistan team has a more stringent, and dare I say, more professional, approach to the whole discipline of monitoring intake of players and on reaching new fitness levels than ever before.

A cursory glance at the national side going through rigorous training with the army before the England tour in 2016, and Misbah-ul-Haq’s acknowledgement with the iconic salute at Lords followed by push-ups as a sign of gratitude to the trainers, speaks volumes on the fruits it bared.

In the finale of the Independence Cup, seven of the players who featured for Pakistan were inculcated into the national side owing to their performance for the privately-owned franchises competing in the Pakistan Super League. When it comes to churning profits in the modern cricket world where players like Chris Gayle are happy with playing leagues around the globe to make a healthy living, no discipline, especially fielding, is ignored to gain that competitive edge.

Players like Shadab Khan, who is only 18, after having his first stint for Trinbago Knight Riders in the Caribbean Premiere League, is soon going to the land Down Under to join Brisbane Heat for the Big Bash League. Players know there is no place to hide in the modern day when it comes to fielding and players and teams alike work harder to ensure requisite standards are met for higher marketability.

Competition within the Pakistan side is also reaping its benefits on the field. With no established idols or icons in the team, it’s an open race for the youngsters to stake their claim in the hearts and minds of the Pakistani fans where every little helps. With catches being taken as players leap above the boundary ropes across the world, the Pakistani players know that retaining a place in the side with mediocre fielding standards is just not going to cut it.

Look at Cristiano Ronaldo and Lionel Messi in the world of football, how their rivalry has benefited the beautiful game with the two mercurial stars raising each other’s standards. A similar phenomenon is taking place in the Pakistani side.

National and international inspirations have also played their part. It is pivotal to note that these young stars grew up watching a very different breed of cricketers and got inspired by them. Jonty Rhodes’ herculean leap to run out Inzamam-ul-Haq in the 1992 World Cup opened a whole new avenue of possibilities of affecting the game in the field, and is etched in the memory of most of these youngsters. So are the revered fitness levels of Younis Khan and Misbah, who always led by example through sheer dedication, diligence and hard work. They emboldened the maxim of ‘practice makes perfect’ and were leading by example even at the end of their international careers, instilling in the new generation the importance of fielding.

Credit has to also be given to the Pakistan Cricket Board, which has hired coaches over the years to improve the fielding standards and drills in the national side. This has contributed to the results we see today. It’s an exciting time for Pakistan cricket where the most ominous considered bowling attack is supplemented by a brand of young cricketers ready to pounce on any and every opportunity.