The Pakistan-World XI series was much bigger than the eventual result, it was about reviving international cricket in Pakistan, and it was about Pakistani cricketers experiencing home support.

A Pakistani fast bowler runs in from the boundary, the crowd cheers him on, every step that he takes towards the bowling crease is met with loud roars and a sound of thousands of bottles banging against chairs in the stands.

Sounds like the 1990s right? When cricket was a regular thing in Pakistan, when stadiums used to be jam-packed, when opposition batsmen had nightmares about Wasim Akram, Waqar Younis and later Shoaib Akhtar.

This isn't the 1990s though; this is 2017. The bowler is neither Wasim nor Waqar nor Shoaib, but a man from Gujranwala who goes by the name Hasan Ali, who had never taken a wicket in Pakistan before. A man who was only playing his second international match in his home country and yet the entire crowd was in sync with his run-up. 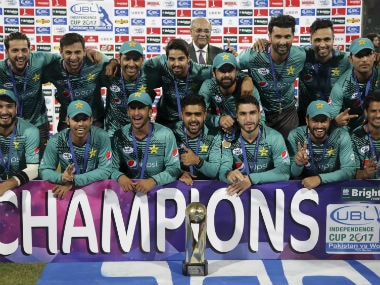 Pakistan won the three-T20I series against World XI 2-1 with a 33-run win in the final match. AP

Hasan fed off the response he received from the crowd and he kept notching up his pace as the support from the stands grew louder.

“Playing in front of your home crowd with the fans cheering for you helps you a lot, this generation of Pakistani players hasn’t experienced that, they are not familiar with this kind of atmosphere. It helps a fast bowler of course, gives him a huge amount of confidence. It’s like when Shoaib Akhtar, Wasim Akram, Waqar Younis and all our great fast bowlers used to bowl in front of their own fans," said Pakistan captain Sarfraz Ahmed.

Sarfraz is spot on in his statement. This generation of Pakistani players is certainly not used to this kind of atmosphere, but it didn’t seem like that at all on Friday. Rumman Raees’ celebration was fully in the knowledge that the crowd would appreciate it, and he dismissed the very batsman who hit him for a six in the previous game to win the match for the World XI.

There was another generation of Pakistani cricketers present that night. Misbah-ul-Haq and Shahid Afridi took laps of honor during the mid-innings break and they received a reception they should have been receiving in every match they played as their 'home' game since 2009.

This was a night to remember, a night to cherish for everyone involved. It wasn’t just the Pakistani players who were were cheered on by the crowd; the World XI players too received amazing support.

“I have never received such support from opposing fans”, said Hashim Amla in his press conference a couple of days ago. On Friday, it went up a notch when Darren Sammy was standing at the boundary of the far end at Gaddafi stadium. He lifted his arms and the entire stand behind him lifted theirs while chants of “Sammy, Sammy” echoed around the stadium.

The atmosphere throughout the match was unbelievable and so was some of the cricket played. Thisara Perara displayed his power and hitting ability when he took Shadab Khan for three sixes and a four in one over, and yet Shadab had a night to remember. He effected one of the most memorable run-outs you will see — running towards the ball, dived and somehow managed to hit the stumps while throwing off balance, all in one motion.

“I have a poster of Jonty Rhodes running Inzamam-ul-Haq out in my room, so I even have Pakistan vs South Africa at my home. Pakistan’s fielding has improved drastically and that Shadab run-out was amazing. Firstly I didn’t think he will get to the ball that fast and then I didn’t think he would be able to hit the stumps”, said World XI captain, Faf du Plessis.

Despite that run-out, Perara’s hitting, Rumman’s celebration, Sammy’s support and some genuinely high quality cricket from others involved, the night well and truly belonged to the fast bowler who made the entire stadium fall in love with him if they weren’t already. Hasan was standing at cover in the final over and after every ball he would run to the boundary and teach the crowd his celebration, they all responded; a fist bump down and arms aloft immediately afterwards.

By the time the penultimate ball of the series was bowled the entire stadium was copying the pacer's celebration. He was Pakistan’s main bowler in the match and the country’s greatest cheerleader all in one. He enjoyed playing in his own country perhaps more than anyone else, he loves his people and they showed they love him back.

Thanks to Hasan and co’s exploits, Pakistan ended up winning the series 2-1. This series however was much bigger than the eventual result, it was about reviving international cricket in Pakistan and it was about these cricketers experiencing home support. Lahore showed up with all its color and flavour on Friday and so did the Pakistan cricket team. At the end while walking back from the stadium, a few kids were imitating Hasan’s bowling action and copying his celebration. That is what this series was all about — new heroes being carved out for a new generation to follow.