South Africa's Faf du Plessis praised Pakistan's effort in its bid to win back confidence of foreign cricket teams and resume international cricket back at home.

Du Plessis led a World XI in a three-match Twenty20 international series in Lahore over the last five days as Pakistan showcased the cricketing world its capabilities to host international matches after eight years.

"I appreciate there was a lot of planning, a lot of time, a lot of money, a lot of energy spent in the planning of this week," du Plessis told reporters on Friday. "Everything was very smooth and very easy and we say thank you for that." 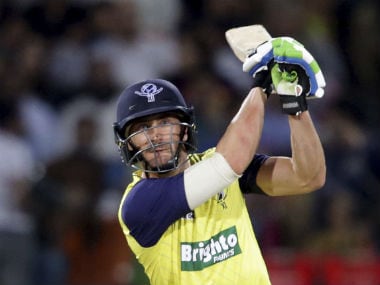 Faf du Plessis admitted he was nervous before coming to Pakistan, but had no complaints once he landed in Lahore. AP

Pakistan clinched the three-match series 2-1, winning the decisive T20 by 33 runs in front of a boisterous capacity crowd of 25,000 at the Gaddafi Stadium.

Players from seven countries were put together in a World XI, with the combined effort of the Pakistan Cricket Board (PCB), the International Cricket Council (ICC) and Zimbabwe's former captain Andy Flower, who came to Lahore as coach of the team.

Several thousand security officials, including armed soldiers, guarded the stadium and the team hotel. Spectators had to pass through at least four security checkpoints before entering into the stadium.

Fans arrived at the stadium hours before the matches began and patiently waited in long queues to watch their star players in action.

"I just loved seeing the emotion on people's faces, that's something that stood out for me," du Plessis said.

"I've never been part of a game where there's been so much emotions and appreciativeness from the crowd, when they are cheering you as if you are playing at your own home crowd, so that's very good to be part of."

The PCB has planned four T20 internationals over the next two months — one against Sri Lanka and a three-match series against the West Indies.

Du Plessis was one of the five South Africa players in World XI along with Hashim Amla, David Miller, Morne Morkel and Imran Tahir.

However, he wasn't sure whether a short tour by a World XI could convince his country to resume playing bilateral cricket in Pakistan.

"They will have to be a complete different set of things put in place for South Africa to come and tour here," he said.

"I'm sure if there was an opportunity... and they saw all the procedures that were put in place and the feedback we as a player, then that could be option."

Du Plessis conceded he was nervous before coming to Pakistan, but once he arrived in Lahore last Monday he had no complaints.

"When I first thought of coming, obviously there was little bit of nervousness within myself," he said. "Now going through this week ... we've really enjoyed as a team, everything was very enjoyable for us."

Flower said all the players would go back to their respective countries with happy memories and hoped Pakistan youngsters would get inspired to become cricketers after watching star players back in action on their home ground.

"This tour is another reminder of the fact that cricket transcends boundaries," he said. "They've (the youngsters) seen some of the best players across the world live in action and this might be the beginning of the cricketing journey of Hashim Amla or Faf du Plessis."