Pakistan vs World XI: Despite euphoria around tour, nation not ready to host international cricket

Hosting a full-strength international side over one-and-a-half to two months for a proper bilateral series, let alone hosting an ICC event, would have the Pakistan security agencies creaking under pressure.

If you discount a low-key limited-overs series against Zimbabwe – one of the weakest teams around – in 2015, international cricket was returning to Pakistan for the first time in nearly eight long years since that deadly attack on the Sri Lankan team bus in 2009. Action during the third and final T20I between World XI and Pakistan at the Gaddafi Stadium in Lahore. AFP

That attack by a dozen heavily armed terrorists left at least nine players and officials, including Sri Lankan captain Kumar Sangakkara, injured and at least six people dead. That incident drove international cricket away from Pakistan and a generation of Pakistani players were robbed of the chance of showcasing their wares in front of their passionate home fans. Pakistan had no option but to adopt the UAE as their 'home', but that really was substituting milk with milk powder. It approximated the real thing but was not the real thing.

Understandably, there was tremendous excitement in the air around the World XI tour among the Pakistani players, past and present, and every cricket fanatic of the country. The World XI players derived satisfaction at having set in motion a process with an eye on a larger target.

"I can assure all Pakistan cricket fans that we have missed playing in front of them. But I am confident that through this tour more cricket will come our way and we will (do) our best to win for the home fans," said Pakistan captain Sarfraz Ahmed.

"We have taken baby steps with this first initiative and we know that giant steps for international cricket in Pakistan will obviously follow after this historic ICC World XI visit," former Pakistan captain Ramiz Raja noted. Another former skipper and the great Wasim Akram was even more emphatic. "Heading to the heart of the nation for what we anticipate to be an epic rebirth of our country's beloved sport- Cricket!" Akram tweeted.

“If we could be a part of history, with the greater purpose of helping the friends in Pakistan watch cricket again, it would be a wonderful thing,” said the double-World T20-winning Darren Sammy. South African batting maestro Hashim Amla revealed he was "excited to be a part of something special", while former England skipper Paul Collingwood hoped the World XI tour was a "small stepping stone for future cricket in Pakistan". 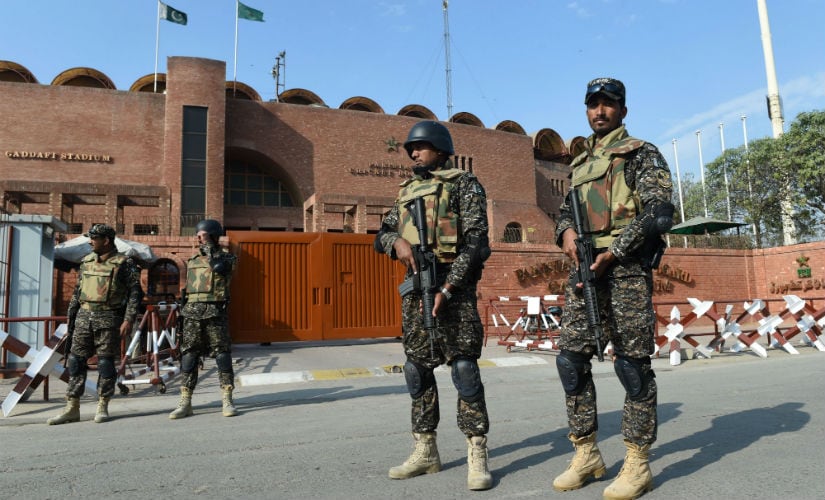 Pakistani soldiers patrol outside the Gaddafi Stadium in Lahore, ahead of the final of PSL 2017. AFP

What was different from the last time that efforts were made to cajole big international stars back to Pakistan was that the efforts saw relative success this time around. Faf du Plessis, Amla, Sammy, Samuel Badree, Imran Tahir, David Miller, Morne Morkel and Collingwood, among others travelled to the troubled nation with the World XI side. This was a massive step up from the time that most of the foreign stars, including the likes of Chris Gayle, Kevin Pietersen, Kieron Pollard, Sangakkara, Mahela Jayawardene, Badree and Shane Watson, backed out as the Pakistan Super League (PSL) final this year was shifted to Lahore, some of them even turning down additional bonus payments between $10,000 and $50,000.

There were no Virat Kohli, Mahendra Singh Dhoni, Gayle, Ben Stokes, David Warner or AB de Villiers in their midst. The stakes would have been inestimably high and the pressure on the security agencies considerably more had those players been a part of the tour. Three T20s, which were no more than invitational/charity matches in the garb of international cricket, organised behind an iron curtain seen during a national emergency is not the greatest of advertisement for the security situation in Pakistan. Have the PCB and Pakistan government been really able to convince the world that their land is completely safe for international cricket?

One remembers England and Quetta Gladiators all-rounder Luke Wright tweeting before the PSL final at Lahore, "I have a young family... a game of cricket is just not worth the risk."

Now that is a real fear. What can the Pakistani establishment do to remove that fear among the international community? Pakistan, since its very birth, has been riven by terrorism, insurgency, coups, political instability and violence. These are existential threats at the micro level in Pakistan. Don't forget, only weeks before the PSL final at Lahore, a deadly blast near the provincial assembly in the same city left 13 dead and 85 injured.

According to a report in the Khaleej Times earlier this month, there have been 426 terrorist incidents in Pakistan so far this year. It is a substantial drop from 785 cases of terrorism last year, but 426 is still too large a number to dispel the fears of the international cricketers to go and play in that country. The South Asia Terrorism Portal reports nearly 1,000 deaths already this year as a result of terrorism in Pakistan. 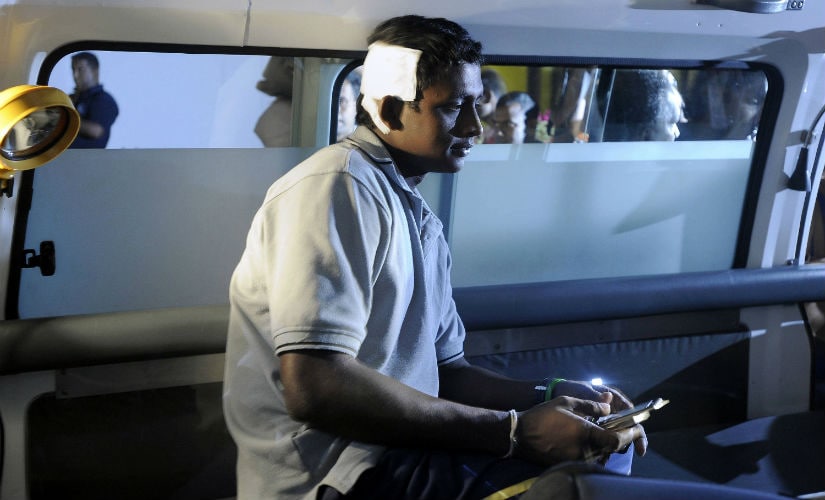 Sri Lanka's Ajantha Mendis sits inside an ambulance shortly after his return to Colombo, following the team's escape from a terrorist attack outside the Gaddafi Stadium in Lahore in 2009. AFP

Sethi and his friends may counter that the PSL final in Lahore passed without any untoward incident, but the veil of security that had to be placed around the city for that one event, suffocated one and all. It was not conducive at all for the cricketers to play with an open mind, it limited the operation of the media, it was far removed from being an enjoyable experience for the fans.

For the PSL final, an unprecedented five-layer security cover was provided to the teams. Over 10,000 army, rangers, special forces and police personnel were deployed. The security forces had completely cordoned off the area around the Gaddafi Stadium and frequent patrols were conducted. The government announced that all roads leading to the stadium would be closed till a day after the PSL final, while all shops and restaurants were ordered to close down till the match was done and dusted. The PCB's own bullet proof buses were deployed to carry the teams from their hotels to the stadium and back. There were sniffer dogs everywhere. A temporary 25-bed hospital was set up adjacent to stadium to meet any medical emergency. All is all, it was akin to playing in a war zone. It was like playing cricket while standing on a powder keg, anxious when it would explode.

Cricketer-turned-politician Imran Khan hit the nail right on the head, quipping, “Under such monumental security arrangements, matches can even be held in Iraq and Syria.” Khan termed the PCB's decision to hold the PSL final in Lahore as "madness". Former captains Javed Miandad and Aamir Sohail also slammed the move.

Khan claimed that had an adverse incident occurred during the PSL final, it would have been the end of international cricket in the country and that it would have taken them another decade to revive cricket in Pakistan.

"What kind of message of peace will we send abroad by arranging the match after closing down shops and roads?” he asked, and one can't help but agree that the Pakistan cricket legend had a valid point. And to that one may add, what game of cricket requires a temporary hospital to be set up near the stadium?

The World XI series was also held under thick and often asphyxiating blanket of security. But the question is whether the Pakistani establishment would be able to provide the same level of protection for a full and proper international series for a lengthy period of time.

Hosting a full-strength international side over let's say one-and-a-half to two months for a proper bilateral series, let alone hosting an ICC event, would have the security and other logistics agencies of the country creaking under pressure. There will be a point when such a mammoth security arrangement would simply become untenable. It is a completely different kettle of fish than hosting a World XI or a Zimbabwe for a short duration, or hosting a PSL match. Can the Pakistani authorities still go ahead with an international series? It is difficult to believe that they can.

That apart, the challenge for Pakistan would also be to hold matches in a place like Peshawar – a noted Test centre, but near Taliban strongholds along the Afghanistan border and witness to one of the worst massacres in recent memory, when in December 2014, a group of Tehrik-i-Taliban Pakistan (TTP) militants wreaked havoc on the Army Public School in the city, killing 141 people, 131 of them being children.

The real test of Pakistan's readiness as a host of a proper international series would be if it can somehow bring India to its shores. The estranged neighbour currently is not in favour of any cricket with Pakistan anywhere, let alone on Pakistani soil, and has ignored the MoU signed between the two cricket boards in 2014 to play six bilateral series between 2015 and 2023. The Indian government had made it clear that there had to be a complete cessation of tensions between the two countries for a bilateral cricket series to take place.

Don't forget that  Sourav Ganguly and Co's historic tour of Pakistan in 2004 — not too long after the Kargil war, the Pakistan-engineered hijack of Indian Airlines flight IC-814 and attack on the Indian Parliament, and massive troop mobilisation on either side of the international border and along the Line of Control (LoC) — was made possible because of the thaw in the relations at that time. There was a de-escalation of tensions as the two sides withdrew their troops from the international border in October 2002, and the 2004 series was played with a ceasefire agreement in place since November 2003. However, if the two countries are to play a bilateral series now, it will have to be under the shadow of the gun.

Repeated ceasefire violations, attacks on Indian soil (Mumbai, Pathankot, Uri), retaliation by India (surgical strikes in Pakistan-occupied Kashmir), Pakistan instigating a massive civilian uprising in Kashmir, cancellation of top level parleys and heightened jingoism in both countries mean that the chances of India and Pakistan resuming bilateral cricket ties look slim and India playing in Pakistan is completely out of question, unless there is a significant and perceptible improvement in relations.

There have been cases where teams have refused to visit countries, or exited because of security concerns. For instance, Australia and West Indies refused to visit Sri Lanka during the 1996 World Cup following a bomb blast in Colombo. The England team left midway through their ODI series in India in 2008 in the wake of the 26 November Mumbai attack. However, cricket soon returned to both those countries as the security situation was not considered to have deteriorated to the extent that matches had to be played by imposing a near-curfew.

West Indies and Sri Lanka may have agreed to visit Pakistan later this year for a few T20Is, and the PCB chairman Sethi may be "over the moon" and indeed World XI captain du Plessis may have chosen to be gracious to his hosts by saying, "I'm very happy with our time here, we've really enjoyed it as a team", and World XI member Grant Elliot may have certified Pakistan as “safe for international cricket”, and despite the need to have international cricket in Pakistan – a core member of the sparse cricket community – the fact remains that Pakistan is still miles away from being prepared to host a full bilateral series against a top cricketing nation.

Even the ICC accepted that international cricket can't make an "overnight miraculous" return to Pakistan. So let's not allow the euphoria around the World XI tour misguide us.