With the match reduced to 23-overs-a-side, the Windies were set a revised target of 166 in reply to New Zealand's 131.

Christchurch: New Zealand completed a clean sweep of the Windies in their one-day series with a commanding 66-run victory in a rain-affected third and final match in Christchurch on Tuesday.

With the match reduced to 23-overs-a-side, the Windies were set a revised target of 166 in reply to New Zealand's 131. 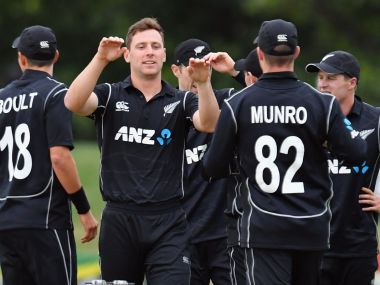 At the close they were 99 for nine, after recovering from an initial collapse which saw them at nine for five and threatening Zimbabwe's world record ODI low of 35.

Captain Jason Holder revived the innings with a quick 34 off 21 deliveries.

But there was little other resistance as fast bowlers Trent Boult and Matt Henry along with spinner Mitchell Santner took the batting apart.

The latest drubbing, following New Zealand's five-wicket win in the first ODI and a 204-run victory in the second, continued a miserable tour for the Windies who also lost the Test series 2-0.

New Zealand elected to bat first, and were 83 for three after 19 overs when rain forced the players from the field. They added 48 in the four available overs after the resumption.

Ross Taylor ended unbeaten on 47 while Tom Latham made 37.

After the Duckworth-Lewis revision, the target of 166 should not have been beyond the World T20 champions, but they found themselves in trouble in the first over.

Chris Gayle, back in action after being sidelined by illness since the half-way stage of the first ODI, only faced six balls in which he hit one boundary before he steered a Henry delivery to Colin Munro at point.

Boult removed Shai Hope (two) in the second over before Henry came back to win a dubious lbw decision against Kyle Hope and the West Indies were seven for three.

Boult, in his second over, accounted for Jason Mohammed for one and Chadwick Walton without scoring to put the pressure on Jason Holder to lift his side out of the mire.

Holder put on 48 with Rovman Powell (11) in a sixth-wicket rally but with their departure the innings folded quickly.

Boult finished with three for 18, Santner took three for 15 and Henry two for 18.

The Windies end their tour with three T20 matches starting in Nelson on Friday.