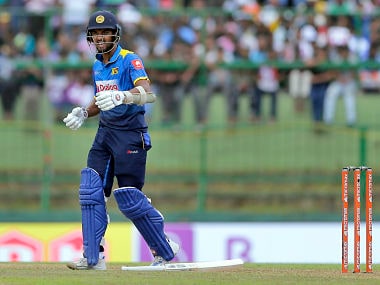 Good first over from Sohail Tanvir.  Just nine runs and an important wicket of Luke Ronchi. Shoaib Malik and Umar Akmal at the crease now for the Legends

Ronchi departs early. trying to force the scoring, but good bowling from Tanvir. Early blow for the Punjabi Legends

Good effort from the Kerala Kings to get to 114. Paul Stirling carrying his bat through. Useful contributions from Eoin Morgan and Nicolas Pooran in the end. At a point it seemed the Kings may struggle to cross hundred thanks to some good bowling from the Legends, but in the end the Morgan-led outfit will b satisfied

Faheem gives 12 runs in the last over. Stirling's innings takes the Kings to a pretty good total in the end. Legends who must win to stay in contention need to bat well in the second innings to overhaul the target

Big over for the Kings. 21 runs from the over. First Stirling, then Pooran. Some exquisite shots for maximum. Not the over Hasan Ali or the Legends were looking for

Chris Jordan with an excellent over in the circumstances. Removed the dangerous Shakib Al Hasan and conceded just 7 runs. Brilliant effort from the Englishman

A frustrated Shakib tries to clear the long-off boundary but is caught in the deep. Kings losing their way

Bopara with another fine over. Giving away just nine runs. Stirling is leading the charge for the Kings, but needs more support from the other end if the Kings are to put a mammoth total

A good is slightly ruined by a misfield on the final ball that leads to a boundary. But Dawlat will be happy with his effort, especially with Pollard's wicket. Just 7 runs come off it. Legends [ulling things back a bit

Pollard departs for a duck after being caught in the deep

Punjabi Legends won the toss and elected to field first

​​WHAT A WIN FOR MARATHA ARABIANS! Rossouw remains unbeaten till the end and smashes two six in last two balls to the clinch the match for his team. Imad Wasim starts the over with a six and then it was all Rossouw's show.

​​OUT! Finally a much needed breakthrough! Hales flicks one straight off Madushanka to deep squareleg fielder and he goes after making 32, Madushanka ends the over strongly, giving away just five runs.

​Vishwa Fernando removes the dangerous Kamran Akmal in the first over. Akmal makes room to smash a back of the length ball but misses it completely. Just four runs from the first over.

​End of the innings! Van der Merwe bowls a good final over as he concedes just 8 runs. T de Silva hits one four in the over while skipper Chandimal remains unbeaten on 37.

​Out! Viljoen sends back dangerous-looking Rajapaksa. The batsman cuts a wide delivery but takes a good low catch inside the circle. Rilee Rossouw. Shehan Jayasuriya joins Chandimal in the middle and soon smashes back to back fours to end the over.

The next match is between Maratha Arabians and Team Sri Lanka Cricket.

Virender Sehwag of Maratha Arabians win the toss the he elects to bowl first,

Usama Mir bowls the final over as Naveed finishes the game off with a six straight down the ground. A fantastic win for the Bengal Tigers, who did not lose their despite regular fall of wickets.

What an over by Hasan Ali! In his very first ball, Hasan removes Darren Bravo and in the next ball, he castles Delport's stumps. In the next four balls, he gives just five runs. Bengal Tigers are in deep trouble now having lost three wickets inside three overs.

Out! After scoring boundary from first ball, Charles gets run-out in the third ball. He tries for the second run but a good throw from the deep and bowler Faheem Ashraf's take gets the job done, Delport then pulls one over deep mid-wicket boundary for a four and ends the over with another pull that fetches four runs.

End of the innings! Anwar Ali bowls a terrific final. He traps Ravi Bopara in the first ball of the over and then shatters Misbah's stumps in the fourth ball. He gives away just eight runs as Bengal Tigers need exactly 100 to win the match.

Punjabi Lions 24/1 after second over.

OUT! Ronchi departs in the first ball of the second over. He went for a slog in the second ball of the over as Anwar pulls off a blinder near the boundary. Ronchi goes after he scores 9. Umar Akmal comes to the crease and he smashes two fours in the over.

That's it from us. It was an action-packed day in the T10 Cricket League. We will be back again tomorrow bringing you all updates from the competition. Sincere apologies for the technical difficulty Afridi claimed the hat-trick with the first three balls to break the backbone of the Arabians, who were on track with England's Alex Hales striking a 26-ball unbeaten 57, in their chase of 122.

Sehwag became the third victim of Afridi's hat-trick, trapped in front by an in-dipping slider.

Interestingly, this was Hales' first outing since the incident outside a Bristol nightclub that led to him and all-rounder Ben Stokes' suspension from England duty.