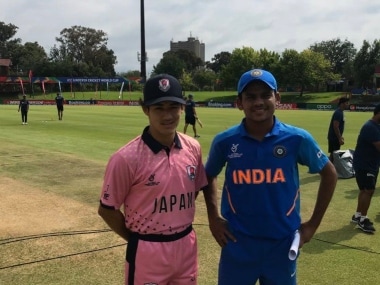 So a great day of cricket for India as they win by 10 wickets. Not so much for Japan who'll take this defeat and the learnings that it brings for this inexperienced young side. India will play their final match of the group stages against New Zealand which should be their toughest outing thus far. As of now, India sit on top of their table and have qualified for the quarter-finals.

We'll be back for the live coverage of India vs New Zealand match in the Under-19 World Cup on 24th January. Until then, Goodbye!

India captain Priyam Garg: I'm very happy with the performance. Our bowlers were good. Spinners were bowling really well but our seamers could have bowled better at the start.

There's no pressure on us as the defending champions. It's a great opportunity for us to perform for our country and we try to do our best.

Japan captain Marcus Thurgate: I knew it was going to be a very tough game. It's disappointing no doubt. The first thing we can do is go back home and try and face tougher oppositions, learn from our mistakes and hopefully, we'll get better with time.

Man of the match, Ravi Bishnoi: I was sure of my planning, wanted to bowl wicket to wicket and I think I executed it very well. I think I will continue with my good work in the coming matches.

All said and done, it was a momentous day for cricket in Japan.

A very special day for Japanese cricket as they take on India today!@navkrish55 finds out more about Japan's journey to the ICC Under 19 Cricket World Cup 👏 #U19CWC | #INDvJPN | #FutureStars pic.twitter.com/H7CznS53mz

And it's all over. India chase down the measly target of 42 inside 5 overs. India win by 10 wickets with a LOT of balls to spare.

Ashley Thurgate into the attack and bowls short and slow. Kushagra had all the time to pull it for a boundary past backward square leg.

Jaiswal slams a couple of boundaries off the first two deliveries of the over before taking a single and giving the strike to Kushagra, who also takes a single. No run off the final delivery of the fourth over. India need just seven more to win.

Jaiswal presents the full face of the bat and drives it down the wicket for a luscious straight drive for four. Next ball, he cuts a rising delivery for four past the point region.

India making light work of this toothless Japan attack. They will be past the total in short while by the looks of it.

Jaiswal is on fire here. He sweeps a ball bowled outside off for a boundary past mid-wicket.

Short again from the bowler and Jaiswal pulls it down the wicket for a huge six, the first of the match. That shot has silenced the Japan captain and wicket-keeper.

Off-spinner Retharekar bowls short and Jaiswal rocks back using his crease to pull it over mid-wicket.

Both batsmen getting on top of the ball comfortably. No half-shots, no hesitation for India here. Easy stuff until now.

Kento Ota-Dobell comes into the attack and bowls a short ball to Kushagra who has all the time in the world to swivel on his feet and play the pull shot. He hits a four towards the square region.

Japan wicket-keeper and captain Marcus Thurgate is trying to inspire his troops with some chatter from behind the stumps but Jaiswal hits a boundary in the first over itself. Not much that can be done here by Japan against this superior Indian side.

Jaiswal gets a juicy full toss on his legs and he lofts it over mid-wicket for a boundary. India off the mark.

15-YEAR-OLD Kushagra Kumar comes in for Divyaansh Saxena while Yashasvi Jaiswal accompanies him to the crease. For Japan, off-spinner Yugandha Retharekar gets the ball for Japan. The India innings is underway.

Dhruv Jurel: It will be a good birthday for me when we win this match. Our bowlers could have bowled tighter with the new ball but it's okay. We will try finishing this match quickly now.

Five batsmen in the Japan batting order were out for zero. For Indian, Ravi Bishnoi was the star with the ball, taking 4 wickets. Kartik Tyagi took 3, Akash Singh took a couple while Vidyadhar Patil took 1.

Japan's 41 all out is the joint-lowest total for a team in Under-19 World Cup cricket.

Ota-Dobell's 39-ball vigil ends with a soft dismissal. He chips a length ball to mid-on for an easy catch and goes for 7. Japan are bowled out for 41 inside 23 overs. Akash Singh gets his second wicket.

Ravi Bishnoi bamboozles No 11 batsman Ichiki with some quick leg-breaks. Just the one run from the over as Japan look to prolong their innings.

Akash Singh gets into the wickets column. Yugandhar goes for just the one run as he mistimes a shot and chips the ball into the air, the fielder at mid-on taking an easy catch.

Another maiden over for Ravi Bishnoi, who’s having fun with his run-up here, running in through the gap between the umpire and the stumps.

Kartik Tyagi can’t seem to clamp down on the extras. He has bowled nine wides in this match, a couple in this over. His run-up is a bit off today. Despite that, he’s taken three wickets and is bowling around 138-140 clicks which speaks volumes of his talent. Just the three runs from the over, all extras.

Another tidy over from Bishnoi, whose figures read 4/4 from his six overs. Just the one run for Japan from this over.

Tyagi bowls over the wicket with a menacing line and length. He gets the ball to escape through the gap between bat and pad for his fifth delivery of the over. The ball clipped the leg-stump but the bails didn’t come off, denying Tyagi his second wicket of the over.

Tyagi bowls full and straight and the ball crashes onto the batsman Max Clement's toe. It's plumb in front and the umpire gives him out LBW. He goes for 5. Tyagi has his third wicket.

Bishnoi is bowling at a quick pace, around 90 clicks but gets the ball to spin a bit too much, the ball straying on the pads on occasion, allowing the batsmen to collect a couple of singles. Just two runs from the over.

The Japan batsmen – Clements and Ota-Dobell just starting to get bat on the ball. They get a boundary and two extras from the over.

Clements plays a good cover drive off a full delivery from Patil and gets only the second boundary of the Japan innings.

Maximillian Clements attempts a wild swing over long-on against Ravi Bishnoi but only edges it over first slip for a single. Just the one run from the over and it’s drinks break.

Nice seam position from Vidyadhar Patil who gets some swing in the air and is bowling at 130 clicks. The batsmen are continually playing and missing the balls. Maiden over.

Would have been a maiden over save the one wide ball from Bishnoi. In fact, most of Japan’s 22 runs have come through extras.

Just the two runs off the bat and the one wicket as Vidyadhar Patil also joins the party of wicket-takers today. Japan being rolled under the carpet here.

Debashish Sahoo was looking to nudge the ball on the on-side but gets a leading edge off the bowling of Vidyadhar Patil. The ball gets lobbed up where captain Priyam Garg dives to take the catch.

Bishnoi is running through the Japan batting order here. Bowls a full delivery which turns away, Ashley Thurgate looks to drive it, but instead, edges it to the slips for an easy catch.

Bishnoi sets up Ishaan Fartyal with two leg-breaks, and then bowls the wrong-un, the ball hitting the front-pad and the umpire adjudging the batsman LBW. Bishnoi has his third, India have their fifth.

Right-arm medium bowler Vidyadhar Patil comes into the attack and is unlucky to concede a four off leg-byes on his first delivery. He bowls another wide in the same over but there are no runs off the bat for Japan, who are struggling to deal with the pace here.

After Kartik Tyagi, Ravi Bishnoi gets two wickets in two balls. Japan are wilting under the pressure here. Runs have all but dried up. This is a quest for survival.

Another perfect wrong-un from Bishnoi. Identical dismissal from the previous one. New batsman Kazumasa Takahashi plays for turn, only to see the ball rattle the stumps. He goes for a golden duck.

Leg-break bowler Ravi Bishnoi comes in. Noguchi leaves the ball, hoping it will turn away but instead, the ball straightens and crashes into the stumps. Embarrassing dismissal that really. Noguchi goes for 7.

Tyagi bowls a short ball first up and it hurries onto Noguchi who plays a pull shot which falls out of the keeper’s reach, allowing the batsmen to run for a single. Tyagi’s remains a bit inconsistent with his line with a couple of wides but completes the rest of the over tidily. Just three runs from it.

Noguchi hits Japan’s first boundary in the ICC Under-19 World Cup. He then collects a single to make it five runs from the Akash Singh over.

Akash Singh bowls a fullish delivery outside off and Noguchi opens the face of the bat, hitting the ball for a boundary past covers.

Tyagi picks up two wickets in quick succession and Japan’s inexperience showing now. New batsman Debashish Sahoo safely negotiates the remaining two deliveries. Just the one run from the over as Tyagi bowled a wide.

Tyagi bowls full and straight. The new batsman in Neel Date - born in Pune - fails to get his bat down in time, gets trapped LBW and goes for 0.

Japanese captain Marcus Thurgate plays across the line, leaving a huge gap between bat and pad. He gets bowled by Kartik Tyagi and goes for just the one run from 18 deliveries. India off the mark.

Preview: Priyam Garg-led India will look to continue their positive momentum in the ICC U-19 World Cup 2020 when they face debutantes Japan in their second Group A game at Bloemfontein's Mangaung Oval on Tuesday. India's colts got their campaign off to a winning start as the side defeated Sri Lanka by 90 runs on Sunday at the same venue, and they will virtually seal a place in the Super League quarter-finals if they defeat the minnows.

Chasing 298, Sri Lanka lost its first wicket in the fourth over as Navod Paranavithana was sent back to the pavilion by Sushant Mishra.

Ravindu Rasantha and Kamil Mishara retrieved the innings for Sri Lanka as the duo put on 87 runs for the second wicket, but as soon as they started gaining an upper hand, India came back as Yashasvi Jaiswal dismissed Rasantha (49), reducing Sri Lanka to 106/2.

Sri Lanka's batsmen played cameos, but the side struggled in increasing their tempo, and the team had to face a defeat by 90 runs.

Earlier, half-centuries from Jaiswal and Priyam Garg enabled India to post a score of 297/4 in the allotted fifty overs.

Openers Jaiswal and Divyaansh Saxena put on 66 runs for the first wicket. Sri Lanka got the breakthrough in the 12th over as Dilshan Madushanka sent Saxena (23) back to the pavilion. Soon after, Jaiswal (59) also was dismissed and India was reduced to 112/2 in the 22nd over.

Tilak Varma and Priyam Garg then retrieved the innings for the side and took the side's total past the 170-run mark.

Garg scored a half-century while Varma fell just four runs short off the mark. In the end, Dhruv Jurel and Siddhesh Veer's unbeaten stand of 63 runs took India's total past the 295-run mark.

Jurel and Veer remained unbeaten on 52 and 44 respectively.