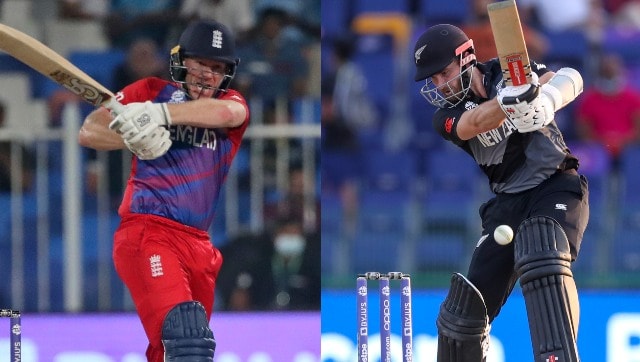 That's it from us here! Hope you enjoyed our coverage. Join us for the second semi-final between Pakistan and Australia tomorrow. Until then goodbye and take care.

New Zealand are the best all-format team at the moment. They have made two white-ball finals in conditions as vastly different as England and UAE. And there is also a small matter of the World Test Championship victory. Tremendous.

Williamson: We knew it was going to be a great game of cricket and it proved to be. Really chuffed with the heart that was shown throughout. They put on a pretty competitive total, staying there and building the partnership and cashing on a couple of moments and matchups was brilliant. He hasn't done a lot at the top order but he's come and batted beautifully in pressure situation. We did have wickets in hand and that was important. He(Neesham) came out and hit the ball hard, it was really valuable innings from us, really clever and strong hitting at the end. A fantastic knock from Daryl, stayed there till the end.  We will be following that match (Pakistan vs Australia), it will be a fantastic one. This is a very strong English side.

Morgan: Full credit to Kane and his team, they outplayed us. We've represented ourselves in this tournament really well and I'm proud of the guys, they have given everything. It's hard to identify the key moments, they built the innings until they had to push the button and then came good. It was a sluggish pitch and we struggled to hit sixes which gave an indication that the track was two-paced. Full credit to Neesham to have that ability to hit sixes from ball one (on that surface)

Daryl Mitchell: A bit of whirlwind at the end. Couldn't remember what was going on but nice to get the job done. It was nice. It was quite challenging especially at the start with the pitch two paced. The way Conway set the platform and Neesh hit a few out of the ground was amazing. We tried to hang in there as long as we could and we knew that one or two big overs would do it.

#NZ are the 7th team to reach the final of #T20WorldCup

Among ‘top-8’ teams, South Africa are the only team not to reach final yet. #NZvENG

Daryl Mitchell is named the Man of the Match

WHAT A WIN FOR NZ! Mitchell wins it in style with a four. They reach their first final of T20 World Cup. What an over for the Kiwis. They finish off the match with an over to spare. They needed 20 off 2 overs. Mitchell has played a brilliant knock. He remains not out on 72 off 47 balls. He smashes one down the ground for a two to start off the Woakes over. Then cracks one over long on for a six. And then thumps a pull over deep mid-wicket for another six. The next two balls yield two singles. Woakes then bowls a full toss, Mitchell heaves it to long leg for a FOUR to win it for the Kiwis.

SIX! Short from Woakes, Mitchell smashes it over deep mid-wicket. 6 needed off 9 now.

OUT! Brilliant catch from Morgan. It's a tad short Neesham looks to smash it over extra cover, doesn't connect it off the middle, Morgan moves to his left and takes a good reflex catch. HUGE wicket.

OUT! Livingstone strikes again. What a spell this is from him. It's a tossed up leg spinner outside off, Phillips goes for the loft, doesn't connect if off the middle and helps it straight into the hands of the long off fielder.

OUT! Livingstone provides the breakthrough. Conway misses out on his 50. He charges down the track, Livingstone cleverly drifts it a touch wide and quicker. Conway looks to smash it through the off side but misses. The keeper clips the bails off. Stumped!

OUT! Guptill departs early, and Woakes gives England just the start they were looking for. Gets a leading edge towards midwicket that results in the easiest of chances for Moeen. NZ 4/1

OUT! Neesham removes Livingstone. It's full outside off, Livingstone looks to smash it over long off, doesn't connect it off the middle and helps it straight into the hands of the fielder.

SIX and OUT! Slower and short from Southee, Malan waits and pulls it over deep square leg. Southee then bowls a good length delivery outside off, Malan stays in his crease and looks to pull but gets a feather touch to the keeper.

OUT! HUGE wicket for New Zealand. Sodhi sends back Buttler. It's a touch full on off, Buttler gets down and looks to reverse sweep, misses as there is a bit of turn away. They go up in an appeal and the umpire lifts his finger.

After three overs of playing circumspect cricket, Jos Buttler started over no 4 with a flourish, dispatching the first two balls to the boundary, driving one and slapping the other to the off-side. Trent Boult, trying to get revenge, tried to bounce Buttler to rattle him on ball no 4, but it sailed over Buttler and Conway's head for a wide and a boundary. It was a good over for England, one they needed as the end of the Powerplay comes near.
Earlier, Tim Southee got some late movement early on in the first over to have Buttler confounded. Buttler responded by flicking the last ball of the first over to the boundary. In the second over, Trent Boult had a decent over, swinging the ball on the odd ocassion, until on the sixth ball, Bairstow got a massive inside edge which missed the stump and evaded the keeper to run to the boundary.

England are bringing in Sam Billings in to replace the injured Jason Roy, Jonny Bairstow will open the batting. Meanwhile, New Zealand are unchanged.

England vs New Zealand Live Score, T20 World Cup semi-final updates:What an eventful over. A brilliant one for the Kiwis. Neesham swings the first ball for a SIX! He again looks to swing it across the line but misses but they run through for a quick two. Jordan then drags it down the leg side for a WIDE. Neesham then smashes one to long on for a FOUR. Jordan then drags one on the off side for another WIDE. Neesham then swings one again, Bairstow from long one hares to his left, catches a brilliant catch relays it to Livingstone. It looks a brilliant catch. The umpire refers it upstairs but replays show Bairstow has touched the ropw ehile taking that brilliant catch. Another SIX. Neesham then mistimes his heave again but it falls in the gap between long on and deep mid-wicket. The fielders misjudged it and they get two. Neesham gets an inside edge off the last ball for a single to make it 23 off the over. NZ need 34 off 18.

Preview: Title favourites but injury-hit England will bank on their X-Factor players to upstage a remarkably consistent New Zealand in the first semi-final of the T20 World Cup here on Wednesday.

England were the pre-tournament favourites and played like one for the majority of the Super 12 stage. However, their loss in the final group game to South Africa showed that they were not an invincible outfit.

The absence of Jason Roy, who suffered a calf injury against the Proteas, is a big blow to the team heading into the semi-finals. Roy and Jos Buttler made arguably the most destructive opening pairing of the tournament. With Roy ruled out of World Cup, there is a strong possibility that Jonny Bairstow will be promoted to bat alongside Buttler, who will be expected to play another match-winning knock on Wednesday.

A big positive is that most of the batters have spent valuable time in the middle going into the knockout game. The role of spinners Moeen Ali and Adil Rashid will be massive as they will aim to provide the wickets in the powerplay and middle overs.

Players will also have the 2019 ODI World Cup final at the back of their minds where both teams could only be separated by a boundary countback rule.

Since then, New Zealand have displayed that they are not just a very consistent team in ICC events, they can also go all the way with their triumph in the World Test Championship final.

The "nice guys" of world cricket look good to finish first in this competition too.

Here's how you can watch the England vs New Zealand T20 World Cup 2021 1st semi-final:

When will the 1st semi-final of the T20 World Cup 2021 between England and New Zealand take place?

The match between England and New Zealand will take place on 10 November 2021.

What is the venue for England and New Zealand match?

England and New Zealand match will take place at the Sheikh Zayed Stadium in Abu Dhabi.

What time will England and New Zealand match start?

Which TV channels will broadcast England and New Zealand match?

The match will be telecast on the Star Sports Network. The live streaming of the match will also be available on Disney+ Hotstar. Besides, you can browse firstpost.com for live updates and over-by-over commentary.