Ireland captain William Porterfield hopes a combination of local conditions and English county cricket experience will work in his side's favour when they make their Test debut at home to Pakistan later this week.

London: Ireland captain William Porterfield hopes a combination of local conditions and English county cricket experience will work in his side's favour when they make their Test debut at home to Pakistan later this week.

Both the Ireland and Afghanistan teams were elevated to Test status last year, making them eligible for the five-day format.

But it is Ireland who will become the 11th men's cricket Test nation when they face Pakistan in a one-off match starting in Malahide, near Dublin, on Friday. 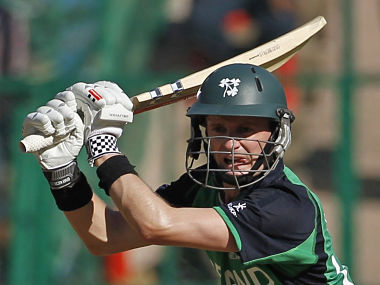 No side has enjoyed a victory in its first Test since Australia beat England in the foundation Test at Melbourne back in 1877 and it would be an upset were Ireland to get off to a winning start.

Ireland, however, did spring a huge surprise when they knocked Pakistan out of the 2007 World Cup in the Caribbean, although that was in a one-day international tournament.

But what encourages Porterfield ahead of Friday's game is that early season conditions in Ireland, which can aid swing bowling and present a particular challenge to batsmen, could prove tough for a Pakistan side brought up on slower, lower and more spin-friendly pitches in the sub-continent.

Pakistan, however, have been acclimatising with two warm-up matches against English county clubs Kent and Northamptonshire.

"It's in Ireland, it's in May, so it's in our own conditions," Porterfield told the Irish Independent.

"Historically, when subcontinental teams come to conditions like those, it has taken them a bit of time to adjust," he added.

Porterfield is also one of several players in the Ireland squad to have played first-class county cricket giving them high-level experience of a long-form game, albeit that County Championship matches last for a maximum of four days rather than five.

"You face Test bowlers in Championship games in England, and in white-ball cricket," said Porterfield, a former Gloucestershire and Warwickshire batsman.

"The biggest difference I found is that they are just a bit more relentless, they don't give you as many bad balls," he added.

"Scoring opportunities are few and far between; you've got to be ready to capitalise when they miss that length.

"It's the same when you're bowling against top players: They put you under a lot of pressure; you don't have any margin for error.