Kolkata Vs Rising Pune Supergiants At Eden Gardens, Kolkata, 14 May, 2016 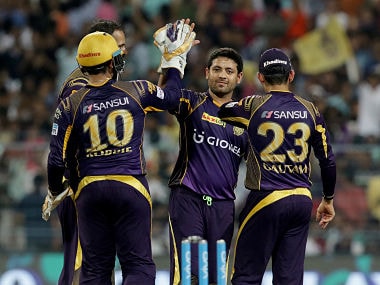 Yusuf Pathan is awarded the Man of the Match

The run-chase was a cakewalk for the home side. But they won the game while bowling. Piyush Chawla and Sunil Narine completely stifled the Rising Pune Supergiants batsman who buckled under pressure. Easy win for the home side in the end

Yusuf Pathan has just killed this game as a contest. After a superb first over from Ashwin, Yusuf Pathan has taken the attack to the RPS bowlers. KKR need 9 runs from 5 overs

Sensational start to KKR innings, two wickets in first over. This could get tricky for the home team

5 wickets for Ashwin in team's first over in T20s in 2016 - joint-most by a bowler. Bhuvneshwar also has 5 wickets. #KKRvRPS

Gautam Gambhir won't be happy with this

12 ducks for Gambhir in IPL. Joint-most by a player with Harbhajan Singh. #KKRvRPS

Ashwin strikes again, now sends Gambhir back to the hut. Rising Pune Supergiants not giving up on this. Gambhir not happy with the decision, but has to walk back to the dugout

Ashwin sees Uthappa coming down the track and bowls it down the leg side. Dhoni has no problems in completing the stumping

Uthappa and Gambhir are out to open the innings for Kolkata Knight Riders. Ashwin to bowl the first over for RPS

Preview: Two-time champions Kolkata Knight Riders (KKR) would look to get one foot into the play-offs when they host a struggling Rising Pune Supergiants in an Indian Premier League (IPL) contest at the Eden Gardens.

The Supergiants have had a horrible season so far with only three wins from 11 games and have no chance of making the last four, whereas KKR have won six out of their 10 outings and ideally need two more victories to make the cut.

The Knights have had lot of ups and downs in their campaign. They started off brilliantly but then somehow lost their way in the middle. In their last league contest at the Eden, KKR lost by five wickets against Gujarat Lions. It was KKR's batting which crumbled under some quality swing bowling. At one stage the home side were struggling at 24/4 and even though Yusuf Pathan and Shakib Al Hasan got them to 158, it just was not enough against the formidable Lions' batting unit.

Pune are also coming into this encounter at the back of a heart breaking defeat. On Tuesday they came out second best against Sunrisers Hyderabad by just four runs.

Chasing a modest 138, the Pune innings never quite got going. They were pegged back by wickets at regular intervals and even for Mahendra Singh Dhoni's finishing skills the target was a bit too far.

The only bright speck for Dhoni's team in the game was Australian leg spinner Adam Zampa who picked up figures of 6-19 and ideally he would want to repeat such a performance on the Eden track known for assisting spinners.

Even though the KKR top order failed in the last game, they have been a force to reckon with so far.

Both openers-Gautam Gambhir and Robin Uthappa-- have been amongst runs and they have been ably supported by the likes of Suryakumar Yadav and Yusuf Pathan in the middle order.

Pathan has scored two fifties in his last three innings which includes an unbeaten 63 in the last contest against the Lions.

It will be interesting to see if the Eden strip swings like it did in the previous encounter. If there is grass on the pitch, both sides would want to play an extra seamer. For the Knights, their strength has been spin and they would ideally want a rank-turner.

Pacer Ashok Dinda will be back in his backyard but in different colours and Pune would want him to strike the early blows.

Coming to their batting, the Australian duo of Usman Khawaja and George Bailey need to fire if the visitors have to put on or chase down a healthy total. All eyes will also be on Ajinkya Rahane who has taken up the role of playing the sheet-anchor.

The bowling has been a worry for Dhoni and one would have to wait and see if his head ache continues.