IPL 2020: England all-rounder Tom Curran says he won't reveal all his tricks in league with eye on T20 World Cup

New Delhi: England all-rounder Tom Curran says he will not be showing all his tricks during the upcoming IPL keeping in mind the T20 World Cup that begins in Australia in October.

"If I'm bowling in the nets to some of the Indian guys, I'm not going to be showing them all the tricks," Curran, who was bought by Rajasthan Royals for his base price of Rs 1 crore, was quoted as saying by ESPNcricinfo. 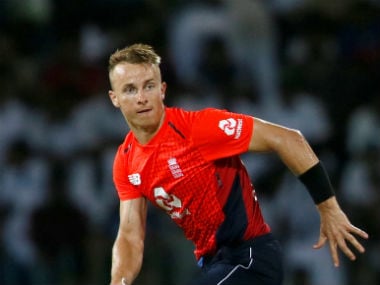 "But that's a huge benefit of having Jos, Stokesy and these guys. I think you actually learn a lot too. Speaking to Jos I'll learn about batting. You just need to have some of the players on the international stage to talk to, and try things with."

The 24-year-old said during the IPL, the focus will be on self-improvement.

"I don't think you chat weaknesses with loads of people anyway. There are a few people who you might trust, and you might ask, 'what does Steve Smith do in this situation?' but it's more about developing and getting better, which we players focus more on," he said.

Australian Andrew McDonald will be at the helm at Rajasthan Royals and Curran said though he is looking forward to working with him, sometimes he might need to filter information.

"I don't think it will make too much of a difference. It will be great to work with him (McDonald) there and he'll be fully involved once he gets to India," he said.

"I haven't worked with him full-time but I have bumped into him. Nowadays you tend to bump into people and have conversations, so it will be a really good experience."

"You're always going to have coaches, but it's about filtering information. There are things that people say some people you're going to listen to, and you almost build up that relationship over time from working with someone."

Rajasthan will also have two top England cricketers in Jos Buttler and Ben Stokes and Curran said it helps to have familiar faces around in a hectic tournament like the IPL.

"I'm really looking forward to it. I've already played a lot of cricket now with the guys there, so it makes it that much easier. Especially being somewhere like India, where it's a busy hectic schedule, to have those familiar faces there will be nice."