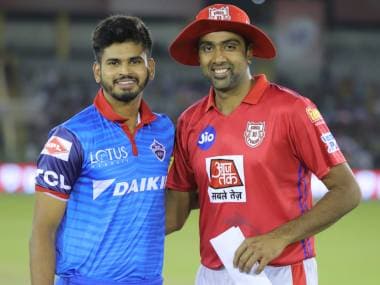 DC vs KXIP IPL 2019 Match 37 Live Updates: GAME OVER! DC win by 5 wickets. Short ball from Curran, and Iyer heaves it to the deep mid-wicket region, there was no one there and the ball touched the ropes. Huge relief in DC camp as they finally hold their nerve and win a close battle.

That's the end of the first double-header of the weekend and we had two mouth-watering contests today. In the first match, Rajasthan beat Mumbai Indians in the last-over finish. And then, DC beat KXIP in the evening match to collect two more points and move closer to the last-4 spot.

We will catch you tomorrow again. In the afternoon match, SRH play KKR at Hyderabad and then RCB host CSK at M Chinnaswamy stadium. See you tomorrow. For now, good night and good bye.

Shreyas Iyer, DC captain: Satisfying win after losing 3 home games. we recovered really well. Shikhar got a good start. Was not an easy wicket to chase. Pitch isn't suitable for the kind of batsmen we have in the team. Important for us to finish the game. Today I took on the responsibility. Lamichhane is a confident lad. Amit Mishra helps him with his experience. Dhawan is giving us brilliant starts. Today we got 60 in first 6 overs and it gave us momentum. I just want to continue this run in future matches.

Ravi Ashwin, KXIP skipper: I thought it was just below par. It was quite hard to hit off the spinners. Lost too many wickets in the middle. Someone like Mujeeb is a very important player for us, and its quite unfortunate. We've got quite a few talents in the dressing room we can back. Unfortunately, we didn't have the runs on the board today. I thought we were giving one or two of those soft boundaries every now and then. Credit to Shreyas Iyer. He held his nerve. (On Brar) He's someone who's come a long way. Gives us quite a few options moving forward in the tournament. We need to catch the momentum now.

This is also first win for DC against KXIP in five matches.

This is Delhi’s second victory at home from five matches this season.

Delhi Capitals are making a habit of this sort of sudden middle-order collapses during a run-chase. However, in the end they have finished at the right side tonight. And the bulk of the credit for this triumph needs to be given to their skipper Iyer, who has batted with utmost sensibility to collect crucial two points from this fixture. In hindsight, KXIP bowlers showed tremendous fighting spirits to drag the game till the last over, despite being handicapped by the dew for the major part of their bowling effort.

GAME OVER! DC win by 5 wickets. Short ball from Curran, and Iyer heaves it to the deep mid-wicket region, there was no one there and the ball touched the ropes. Huge relief in DC camp as they finally hold their nerve and win a close battle.

Ball 3: Curran to Iyer, fuller in length and Iyer smashes it to deep cover, does not connect well and it goes to Mandeep on a couple of bounce. 2 runs. 2 needed off 3 now.

Ball 2: Curran to Rutherford, fuller in length and the left-handed batsman smashes it to long-off boundary, four saved. Just 1. 4 needed off 4 balls.

Last over, Ball 1: Curran to Iyer, just 1 run as he hits the ball to deep mid-wicket and runs a single. 5 needed off 5

GAME OVER! DC win by 5 wickets. Short ball from Curran, and Iyer heaves it to the deep mid-wicket region, there was no one there and the ball touched the ropes. Huge relief in DC camp as they finally hold their nerve and win a close battle.

OUT! What are you doing, DC? Axar flicks the ball to the leg side and runs single and then realises there is one more in this, comes back but collided with Shami on return, it breaks his momentum and by the time he returned, throw had reached the striker's end. Rahul took the bails off. Bizarre scenes. Axar run out (Agarwal/Rahul) 1(1)

OUT! Ingram has been cleaned up by Shami, Ingram danced down the track but Shami bowled the perfect yorker and it uprooted his middle stump. Brilliant ball from Shami to get rid of him. Ingram b Shami 19(9)

Fifty for Iyer. Hits the ball to the leg side, takes a single and completes a fifty, a well-deserved one but the job is not over yet.

OUT! Pant is gone. Nothing shot from him. Very, very irresponsible from the young wicket-keeper batsman. Tries to clear the boundary at deep mid-wicket, ball takes leading edge and flies to the deep backward square leg and Curran takes a safe catch. Pant c Sam Curran b Viljoen 6(7)

OUT! That's the end of Dhawan's innings. Short stuff again bowled at him, Dhawan yet again wanted to pull, the ball took the leading edge and went up in the air, Ashwin and Gayle lined themselves to take the catch but a timely call by Ashwin meant he took it safely.
Dhawan c Ashwin b Viljoen 56(41)

Fifty for Dhawan. What a knock so far. The wet ball and outfield is helping but despite that, the way Dhawan has paced this innings deserves applause. Now, he needs to make sure he bats till the end and guides the team home. 100 also up Dilliwallas. Delhi Capitals need 63 runs in 48 balls

Debutant Harpreet Brar comes into the attack and is welcomed by Dhawan with a massive six in the off side. Not a good start in IPL at all with the ball as he has given away two more fours in the over. 17 came in the over. Fifty also up for Delhi.

OUT! Huge mix-up in the middle. Dhawan hit it to cover fielder and called for run, Shaw left his end to complete the run, Dhawan yelled back to say no, Shaw stopped and then started running back but by then Mandeep hit the bulls eye and hit the stumps at non-striker's end. End of Shaw. Prithvi Shaw run out (Mandeep) 13(11)

OUT! Ashwin attempts to hoick the short ball from Rabada down the ground, but doesn't hit the ball well enough to get the distance, with his Delhi counterpart Iyer taking the catch at long on. KXIP 151/7

OUT! Axar saw Mandeep charging down the track for a premeditated slog, and changed his line instantly, firing it out of his reach. Mandeep doesn't quite make the most of his reprieve on 21, adding just nine more runs. KXIP 129/6

OUT! Two quick wickets for Lamichhane in his third over, this time getting rid of Curran, who chips the ball back to the bowler for an easy return catch. KXIP 106/5

Curran c and b Lamichhane 0(4)

OUT! Needed some brilliance in the deep to get an equally brilliant Gayle dismissed! The Jamaican smashes the ball towards deep midwicket looking for another big hit. Ingram, stationed near the boundary, leaps up and throws hard towards Axar, whose standing quite some distance away towards long on! Umpires take this upstairs with the soft signal 'Out', and the dismissal is found to be legitimate.Big breakthrough for the Capitals. KXIP 106/4

Fifty up for Chris Gayle! The West Indian has raced away to the milestone in just 25 deliveries, striking at 200 today! Kings XI have lost wickets early, but thanks to Gayle's big hitting, their prospects of posting a total in excess of 170 are alive. KXIP 73/3

OUT! Axar strikes off his first delivery of the evening, as Miller skies the ball towards deep midwicket after moving down the track, hitting off the toe end. Shaw collects the ball safely near the boundary; KXIP 61/3

OUT! The change of bowling works for the Capitals, as Agarwal gets a thick leading edge while attempting to pull a short ball from Rabada, getting caught by debutant Rutherford at point; KXIP 42/2

OUT! Lamichhane finally strikes after getting hit for a six and a four by Rahul, dragging his length back and drawing Rahul forward, with Pant pulling off some quick glove work behind the stumps. Nothing behind the crease, and Rahul's walking back to the dugout. KXIP 13/1

IPL 12 Match 37 DC vs KXIP at the Feroz Shah Kotla Ground in Delhi: GAME OVER! DC win by 5 wickets. Short ball from Curran, and Iyer heaves it to the deep mid-wicket region, there was no one there and the ball touched the ropes. Huge relief in DC camp as they finally hold their nerve and win a close battle.

IPL 2019, DC vs KXIP, Today's Match Preview: Delhi Capitals (DC) take on Kings XI Punjab (KXIP) at the Feroz Shah Kotla in the evening fixture of Saturday's double-header, this being the second meeting between the two sides in the ongoing Indian Premier League (IPL) 2019.

Delhi looked set to cruise to an easy victory in their previous outing against Kings XI at the Mohali, before Rishabh Pant's dismissal sparked a spectacular collapse that saw them lose their last seven wickets for just eight runs. Newcomer Sam Curran collected a hat-trick along the way to seal a 14-run victory for the home team.

What will further bolster KXIP's hopes ahead of the upcoming clash is Delhi's poor record at their home ground so far in the season. Barring a victory in the Super Over against Kolkata Knight Riders (KKR), Delhi have struggled at the Kotla, having lost the other three home matches that have taken place so far, including a 40-run hiding at the hands of Mumbai Indians (MI) on Thursday that resulted in them slipping down a place to third in the points table.

KXIP enter the match on the back of a away victory against Rajasthan Royals, beating them by 12 runs at the Sawai Mansingh Stadium in an encounter that saw the Kings XI attack restrict the run flow for the opposition batsmen, especially aggressive opener Jos Buttler, and will be the side that will have the mental edge in Saturday's encounter.

Ravichandran Ashwin has been brought back into the Indian T20 team after a gap of eight months.

‘You have to give Shikhar Dhawan importance': Former India selector slams BCCI's handling of the cricketer