Lack of partnerships once again put paid to West Indies' hopes as they handed a 0-1 lead to India in the three-match ODI series.

Port-of-Spain: West Indies coach Floyd Reifer said the middle-order batsmen need to show more grit and fighting spirit in order to win matches after they suffered a 59-run loss against India in the second ODI.

Lack of partnerships once again put paid to West Indies' hopes as they handed a 0-1 lead to India in the three-match ODI series. 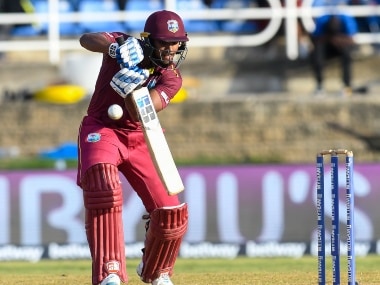 Nicholas Pooran in action during second ODI against India. AFP

In reply, West Indies were on course at 148 for four before they lost their last six wickets for 62 runs to be bundled out for 210 in 42 overs.

"We got to continue to learn from this experience. Guys in the middle order, we got to show more fight, a bit more grit. More determination to build those longer partnership," Reifer said at the post match conference.

Opener Evin Lewis (65) and Nicholas Pooran (42) had kept West Indies in the hunt but the loss of wickets at regular interval turned the match in India's favour.

The 47-year-old, however, lauded the efforts of his bowlers who restricted India to 279 for 7.

"I thought the bowlers bowled very well to restrict India to 279, I thought it was a very good effort from the bowlers. Great bowling line and length, variation of pace. Carlos Brathwaite really bowled well, Chase had a good spell, all the other bowlers, Cottrell again, a champion."

Asked about the final ODI, which is scheduled to take place here on Wednesday, Reifer said the team, which is in the rebuilding process, can still pull off a win.

"It's not an uphill task (to win), like I said in the past interviews, we are rebuilding, we are building our side again.

"And when you are building a side, you get speed bumps along the way. It's how you bounce back from them. Our meeting will be how we assess today and things we need to do better going the next game," he added.

"300 game for a West Indian, obviously he is the first to have done it. It is a great achievement I feel honoured to be here working with him. I have played with and against him and now I am coaching so it was great to see his 300th game," he said.