A statistical wrap of the recently concluded T20I series between India and West Indies.

India's win against the Windies was their ninth consecutive bilateral T20I series win consisting of three or more matches, in fact, they haven't lost any.

After thrashing the Windies in the whites, the visitors desperately needed to bounce back in the limited-overs international and they somehow managed to provide some fight in the ODI series but defending World T20 champions could not really up their ante in their favourite format as India won the T20 series 3-0. For India, captain Rohit Sharma clicked, Shikhar Dhawan fired, Rishabh Pant proved himself and the debutants Krunal Pandya and Khaleel Ahmed also showed that they have a bright future ahead and are ready for Australia T20Is. Kuldeep Yadav and the pace duo of Bumrah-Bhuvneshwar were impressive as ever. On the contrary, the Windies need to work on their team combination first and especially batting positions of players to get back on track in the shortest format of the game.

And as India head to Australia, they would be looking to end the year on a high in the T20 format as they take on the hosts in a three-match T20I series.

Let’s look at some of the vital records created and broken during the series.

India have now won 13 T20Is in this year which is the third most by a team in a calendar year.

Rishabh Pant became the second youngest Indian batsman to score a fifty in T20Is, against the Windies in Chennai. He also became the third-fastest batsman to hit 100 sixes in T20 cricket during the same T20I – in just 58 innings.

Only Martin Guptill has now amassed more runs than Rohit Sharma in T20Is. Moreover, the Mumbai batsman became the first player to hit four centuries in T20Is when he scored 111 off 61 balls in the second T20I in Lucknow.

Rohit Sharma now holds the new record of hitting most sixes in a calendar year in international cricket, eclipsing his own record of 65 sixes in 2017, across formats.

No pair has scored more runs and century stands in T20Is than the duo of Rohit Sharma-Shikhar.

The six-hitting monster that he is, Rohit Sharma surpassed Brendon McCullum to register second-most number of sixes in T20Is while he holds the record of hitting most sixes in India in T20Is (36). 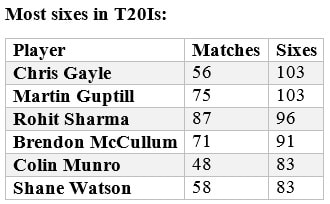 Rohit Sharma has now won eight Man of the Match awards, in the Indian team, only Virat Kohli has won more in the shortest format of the game.