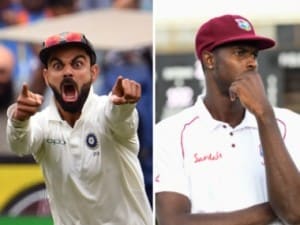 The day's play will endure in the memory of the West Indies players' for it showed how they can lay their brilliant starts to utter and complete waste. Ishant Sharma deserves the praise for his five-wicket haul on a pitch where the batsmen were able to play their shots without much trouble.

India are in a commanding position, still leading by 108 runs. Jason Holder will hope to breach the 200 run mark to gain that psychological boost and gnaw at the Indian lead, bring it below 100 before the home side take to the field again.

The pitch has held up pretty well over the course of the day's play and the third day also promises to be riveting. And we'll see you then when play resumes tomorrow evening (IST). Until then, it's goodbye from us. Thank you for tuning in to firstpost.com. Have a good night!

Ishant Sharma has now taken three five-wicket hauls against West Indies - the most for him against an opponent, going past his two five-fors against New Zealand and England each.

Great day's work for India. First Jadeja took them to 297 and then Ishant fired them to what seems like a healthy lead. Started off a tad expensive but then brought back the control and rhythm he is well known for, Ishant deserved this fiver completely. India's Test attack is up and running again, so this is a great start to the season as compared to how the batsmen fared on day one.

West Indies meanwhile are down in the dumps after a poor start. It's been a tough wicket to bat on so far, and it doesn't seem to be getting better. India in total control after day 2.

Virat Kohli brings Jasprit Bumrah for the last over of the day. Holder plays it out even as Virat Kohli changed his fields frantically. West Indies still trail by a 108 runs. The West Indies need to introspect at their approach which lay their positive starts to waste. Not a single batsman has crossed fifty for them this innings. Roston Chase came closest with his 48.

Jason Holder realises that the time is now to strike those lusty blows. He looks to pull one over the midwicket but misreads the length and skies it to deep backward point where Vihari can't hold on.

Jason Holder isn’t looking to keep the strike to himself for the fag end of the day’s play which begs the question: Why not? He’s the only decent batter left. They need him there, to play for time or runs to get any closer to the Indian first-innings score.

West Indies are coming off the seams, literally. It's the cross-seamed deliveries which have accounted for a couple of wickets for Sharma alone.

Two in a day for Ishant Sharma. This time lower than the previous one and Hetmyer walks back. Fitness again into view because he is late in the spell as well. And just as I type this, fiver... for Ishant. Welcome return to Test cricket for the lanky speedster. India all over West Indies now and those 297 runs they got seem to be enough to force a victory.

The cross-seam reaps rich dividends for Sharma who makes his five-wicket haul. Kemar Roach goes for a duck, pushing at a full-pitched delivery but is slow to bring his bat. The ball takes the edge and Kohli is alert at second slip, pockets it easily. West Indies are falling apart here.

The ball pitches short of a length, at the middle stump and straightens thereon, Hope plays as it draws on his body, splits him up, takes the edge and Pant lunges forward to pocket the dipping ball safely. Hope perishes for a well made 24.

Jadeja does it again. Rushes the batsman with a speedy delivery, Brooks edging the ball onto the keeper Pant's thigh, lobbing it up for an easy catch for Rahane. That's teamwork!

Brathwaite drives a fullish delivery and Sharma grabs onto it even as he almost falls over in his follow-through. It helps that he has lost the long hair and can sight the ball!

Full and fast, John Campbell was not anticipating this. The ball caught the inside of his bat and rattled the stumps. It's proven to be a great bowling change to bring Mohammad Shami for Bumrah.

Jadeja pulls but the rising delivery from Jason Holder which draws the edge off his bat. Shai Hope pockets it safely. Lunch is called.

Just when we were getting ready for some fireworks. Mohammad Shami not looking to hold his guns before lunch. Pushes at one but fails to send it past the bowler. Roston Chase takes the catch off his own bowling.

The Indian dressing room rises to its feet, lauding the effort on display here. Kudos to Ishant Sharma for sticking it out and batting strong here.

WICKET: Pant edges a good-length delivery to slips. Just when it seemed like he had gotten his eye in after playing a couple of cover drives for a couple of runs each this over

Must be agonising being KL Rahul. He sees out the new ball with pure grit and then, gets out nicking one which was straying down his leg side. Nevertheless, his partnership with Ajinkya Rahane is what saved the blushes for the Indian team. Rahane himself has now gone 17 Tests, 28 innings without a hundred as he fell on 81 yesterday. But the importance of his innings can't be understated. Read more on the Indian Vice Captain's innings here

India vs West Indies, LIVE Cricket Score, Test Match, Day 2 at Antigua Latest Updates: Virat Kohli brings Jasprit Bumrah for the last over of the day. Holder plays it out even as Virat Kohli changed his fields frantically. West Indies still trail by a 108 runs. The West Indies need to introspect at their approach which lay their positive starts to waste. Not a single batsman has crossed fifty for them this innings. Roston Chase came closest with his 48.

Day 2, report: Ajinkya Rahane made 81 as India advanced to 203 for the loss of six wickets at stumps on a rain-affected opening day of the first test against West Indies in North Sound, Antigua on Thursday.

Rahane, without a test century in two years, fell short of the mark again when he was bowled by paceman Shannon Gabriel, via an inside edge.

His innings helped India steady the ship after they had been reduced to 25 for three on a day when West Indies won the toss and sent the visitors in to bat.

Captain Virat Kohli was among the India top order to fall cheaply. He made only nine before being caught in the gully, again off Gabriel, who finished the day with figures of 2-49.

Gabriel complemented fellow opening bowler Kemar Roach, who picked up 3-34, including two early breakthroughs when he had both Mayank Agarwal (five) and Cheteshwar Pujara (two) caught behind.

Only 68.5 overs were bowled due to intermittent rain.

The two-test series is part of the inaugural World Test Championship.