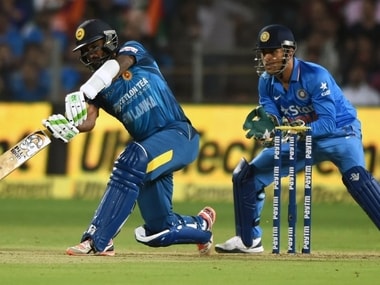 That's it from us. Hope you enjoyed our coverage. Until next time, good bye and take care.

India back at NUMBER ONE position in ICC T20I Rankings.

Ravichandran Ashwin is named the Man of the Match and Man of the Series.

Sri Lanka have never won any bilateral series in India in ANY format! #INDvSL

It was a brilliant bowling display from India. Ashwin started it off with four wickets from first five overs. It was good bowling but Sri Lanka were guilty of playing rash shots. Raina then chipped in with a couple of wickets and Jadeja shone with his bowling and fielding as well. Sri Lanka never got the momentum going and succumbed to their lowest T20I total. Indian openers provided a brisk start and then after Rohit's departure, Dhawan carried on and played a very good innigns of 46. Rahane too played sensibly for 22. Another comprehensive win for India. Their spinners set it up nicely.

Dhawan finishes it off in style with a six and a four. He stays not out on 46.

Dilshan was too short in that over. But he got away with just four singles in the over. 14 needed off 42.

Dilshan into the attack now.

Length delivery outside off, spinning away. Shanaka stays in his crease and looks to steer but gets an inside edge onto the stumps.

Senanayake is the new batsman.

WICKETS ALERT! It's a procession from Sri Lanka. Another two wickets fall and they are 21/5!

Ashwin tosses one up and it spins back in from middle and off, Gunaratne looks to tuck but seems to miss it, the ball flicks the thigh pad on its way to leg slip where Raina pouches it. They appeal and the umpire raises his finger.

Siriwardena then looks to pull a good length delivery on off from Nehra but misses it completely and finds his stumps shattered.

Sri Lanka have already lost 2 wickets and Ashwin is bowling well, Chandimal for some unfathomable reasons looks to deposit one out of the ground but gets a top edge high in the air, Pandya at mid off makes no mistake.

Siriwardana is the new batsman.

Twin strikes from Ashwin in the first over. What a start for India.

He totally outfoxes Dickwella at first. It's nicely flighted outside off, Gunathilaka charges down but is totally outfoxed by the away spin. He misses and Dhoni collects, takes his time and clips off the bails. Dickwella had given up.

Ashwin then tosses it up outside off to Dilshan, it spins back in sharply. Dilshen looks to turn it tot he leg side off the front foot but misses and the umpire lifts his finger.

Vishakapatnam: Having won their last game, hosts India would look to seal their second T20 series on the trot as they take on Sri Lanka in the final game here on Sunday.

India came back from an embarrassing defeat in Pune to convincingly beat the visitors by 69 runs in Ranchi to level the series.

In the first T20 after the 3-0 win in Australia, India went in as the favourites, but they struggled to cope with the pace and bounce of the strip, which Indian skipper Mahendra Singh Dhoni referred to as an "English wicket". Can India carry on their momentum from Ranchi? AFP

Pacers Kasun Rajitha and Dasun Shanaka tore through the Indian batting line up and bowled them out for a paltry total of 101 runs.

Sri Lanka had little hiccups in their chase too, as veteran fast bowler Ashish Nehra and Ravichandran Ashwin kept chipping at the wickets but the islanders managed to get over the line with five wickets and two overs to spare.

Two days later, the battle ground shifted to Ranchi and this time and Indian batters, who had failed miserably in the first game, ensured they give it back to the Sri Lankan bowlers.

And tonk they did, as the openers Shikhar Dhawan and Rohit Sharma put on a partnership of 75 runs in seven overs.

Dhawan was the aggressor as he blasted his way to a 25-ball 51.

The likes of Ajinkya Rahane, who is getting to bat at no.3 in the absence of Virat Kohli, Suresh Raina all contributed with the bat and then Dhoni played his card right by sending newcomer Hardik Pandya to come ahead of Yuvraj Singh and himself.

Pandya helped India get closer to the total of 196/6 hitting 27runs of just 12 balls. In the field too, Dhoni's tricks did not backfire. He opened the bowling with tweaker Ravichandran Ashwin and held back Jasprit Bumrah till the 16th over.

The plans worked and Sri Lanka failed to even get closer to the target. The Indian skipper also had a good day behind the wicket effecting two crucial stumpings.

Come Sunday, the only cause of concern for the hosta will be Rahane's form. Dhoni might just think of having Manish Pandey but then again will he disturb a winning combination?

The Indian bowlers have bowled well in both the outings and maybe they will stick to the ploy of opening with Ashwin.

Sri Lanka would ideally want a repeat of the Pune game, but the wicket here will be anything but green, so they might have to bat out of their skins if they are going to clinch the decider.

The contest promises to be an engaging one as both sides would want to end it on a winning note and then go into the Asia Cup T20 and World T20 high on confidence.