Vizianagaram: Rohit Sharma will begin a last-ditch effort to save his stop-start Test career with a trial run in the unfamiliar opener's slot when he leads the Board President's XI in a three-day warm-up game against South Africa, starting on Thursday.

With the national selection committee and the team management deciding to promote Rohit as an opener, keeping his spunky stroke-play in mind, the next five Tests could be a make or break for the 32-year-old stylish right-hander. 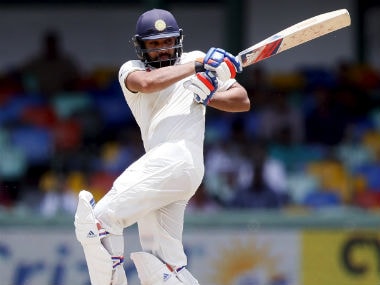 He will have Mayank Agarwal for company as the two would look to strike an understanding before the first Test starting on 2 October in Visakhapatnam.

The third notable character in the game would be Umesh Yadav, who has been drafted into the Test side as an injured Jasprit Bumrah's replacement.

He will look to rattle the likes of Faf Du Plessis and Aiden Makram in order to make a statement.

But the focus from Thursday will undoubtedly be on Rohit.

One of the modern-day greats in the white-ball format, Rohit's average of 39.62 in 27 Tests, including three hundreds, doesn't do justice to his potential.

Red-ball vice-captain Ajinkya Rahane and the fast-rising Hanuma Vihari consolidated their middle-order slots with impressive performances in the West Indies and the only remaining option for Rohit was to bat at the top.

The three-day game against the quality red-ball attack of South Africa, comprising Kagiso Rabada, Vernon Philander and Lungi Ngidi, will be a good dress rehearsal before the opening game in Visakhapatnam.

Rohit's technique against the moving red SG, Dukes or Kookaburra has been suspect but this is an inspired punt that Virat Kohli and Ravi Shastri are ready to take keeping Virender Sehwag's stupendous success in mind.

If it clicks, this will be considered a masterstroke but if it doesn't, the A team's supply line of openers comprising Shubman Gill, Abhimanyu Easwaran and Priyank Panchal will be there.

Not to forget KL Rahul, who would look to score heavily and get his place back and Prithvi Shaw, also hungry as ever after having served a doping ban and learnt harsh lessons of life.

Even if Rohit succeeds on the low and slow sub-continental tracks, there's no guarantee that he would be able to replicate it on the grounds in New Zealand, where Trent Boult promises to bring it back in repeatedly.

The road ahead will be tricky for one of India's finest ODI openers as the next six months will decide his fate in the game's traditional format.