Olivier has played five tests for South Africa since making his debut 12 months ago while Ngidi is uncapped at Test level but has played three T20 matches.

Cape Town: South Africa have added seamers Duanne Olivier and Lungi Ngidi to their squad for the second test against India, which starts in Pretoria on Saturday. 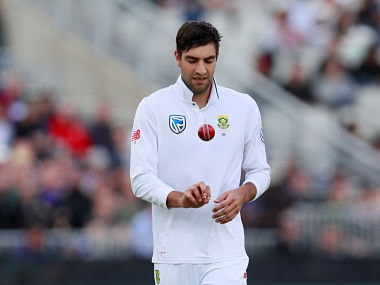 The pair has been called into the squad as potential replacements for Dale Steyn, who has been ruled out of the remainder of the series with a heel injury.

It is another bitter blow for the fast bowler who returned from 14 months on the sidelines in the 72-run first test victory in Cape Town that saw him break down again.

Olivier, 25, has played five tests since making his debut against Sri Lanka 12 months ago and has 17 wickets at an average of 23.11.

Ngidi, 21, is uncapped at test level but has played three Twenty20 internationals and is regarded as one of the finest up-and-coming fast bowling talents in South Africa.

"I have heard a lot of good things about Ngidi so I’m looking forward to seeing what he brings," coach Ottis Gibson said in a media release from Cricket South Africa. "We are expecting similar bowling-friendly conditions in Pretoria so this pair will bolster up our options heading into the match."