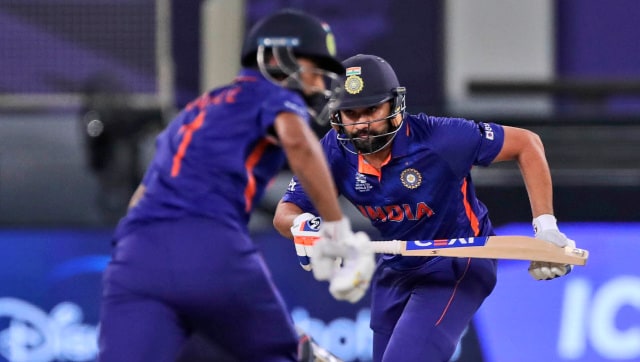 That's it from us. Hope you enjoyed the coverage. Do join us for the coverage of 2nd T20I on Friday. Until then, goodbye and take care.

Suryakumar Yadav is named the Man of the Match

india are unbeaten in november#INDvNZ

The R-R era begins with a win at SMS. 🇮🇳💗

India vs New Zealand in T20Is:

SINGLE! Axar taps it to backward point and scampers through for a single. 3 needed off 3! Pant on strike now.

WIDE! Mitchell bowls it wide outside off. 4 needed off 4!

OUT! Iyer departs. He reverse sweeps it to short third man.

FOUR! What a way to get off the mark in international cricket. Iyer smashes it over mid-wicket, off Mitchell. 5 needed off 5.

OUT! Iyer departs. He reverse sweeps it to short third man.

OUT! Iyer holes out to long off. Good length delivery outside off, Iyer looks to go over the top, doesn't connect it off the middle and helps it straight into the hands of the fielder.

10 needed off the last over.

OUT! Boult cleans up Suryakumar Yadav. A very good innings comes to an end. 62 off 40 balls. Suryakumar shuffles and goes for the scoop but Boult bowls it full and on the stumps. Suryakumar misses and finds the stumps shattered.

OUT! Boult strikes. Rohit is caught at short fine leg. It's the slower one, short, Rohit goes for a pull but is early into it. He is done in by the change of pace and Rohit gets a top edge to short fine leg.

OUT! Santner strikes. Rahul holes out to deep square leg. A touch short on middle, KL Rahul rocks back and looks to pull, doesn't get it off the middle and finds the only man in the deep on the leg side at deep square leg.

OUT! Sound of the timber! Good length delivery on middle, Ravindra looks to swing across the line, misses, Siraj hits. It's that scrambled seam delivery that does the job.

OUT! Bhuvneshwar removes Seifert. It's the leg cutter, Seifert looks to heave across the line but gets an outside edge to backward point where Suryakumar Yadav settles under it and takes a good catch.

SIX & OUT! Guptill smashes one over deep mid-wicket for a HUGE six. He then looks to go the same route but Chahar bowls a slower one, Guptill mistimes and holes out.

OUT! Ashwin gets second in the over. It's the carron ball. Length delivery outside off, angling in. It spins away after landing. Phillips is squared up and misses his defense. Gets hit on the back pad. The umpire lifts his finger on the appeal. Phillips opts for a review but replays show the impact was umpire's call and it was hitting the stumps. The onfield decision stands.

OUT! Ashwin cleans up Chapman. A very good innings ends. Chapman departs for 64 off 50. it's a nicely flighted delivery on middle, it spins away after landing. Chapman looks to heave across the line but misses. The ball shatters the timber.

OUT! Brilliant delivery! Bhuvneshwar Kumar cleans Mitchell up with a beautiful inswinger. It's a good length delivery outside off, it swings in sharlly and then nips back in off the pitch as well. Mitchell stays in his crease and looks to defend but is done in by the movement and misses. The ball shatters the timber.

India vs New Zealand Live Score, Final Cricket Score and Live Streaming, Latest Updates: INDIA WIN! Rishabh Pant smacks it over mid off to finish it off in style. He walks down and thumps a good length delivery over mid off to celebrate a five-wicket win. India, under Virat Kohli for the final time in T20Is, endured a forgettable campaign in the recently-concluded World Cup, exiting from the Super 12s following defeats to Pakistan and New Zealand. The Kiwis, meanwhile, reached another final, where they were outclassed by Trans-Tasman rivals Australia in Dubai on 14 November.

This has given New Zealand very little time to recover and regroup, and as a result, skipper Kane Williamson opted to sit out, with Tim Southee to take over as captain for this series.

The Kiwis will also miss Devon Conway, who suffered a freak hand injury during the semi-final against England last week.

The Indian selection committee announced a bulk of changes for the T20s, including Rohit Sharma being named the skipper. The likes of Virat Kohli and Jasprit Bumrah have been rested following India’s World Cup campaign.

All-rounder Venkatesh Iyer has received his maiden India call-up and would look to impress for the all-rounder's spot with Hardik Pandya being dropped, while Yuzvendra Chahal who was controversially dropped from the T20 World Cup squad, returns to the side. The squad also consists of Ruturaj Gaikwad, who has shown his impeccable batting skills in the IPL with CSK.

Other IPL stars like Harshal Patel and Avesh Khan also find themselves in the squad.

KL Rahul looks set to open, but India do have other options in Gaikwad and Ishan Kishan.

Ashwin, who enjoyed a positive limited overs comeback in UAE, will also look to raise his game once more in the series.

Ahead of India’s home season opener, here’s all you need to know about when and where to watch the game:

When will the first T20I between India and New Zealand take place?

The match between India and New Zealand will take place on 17 November, 2021.

What is the venue for India vs New Zealand match?

The match will take place at the Sawai Mansingh Stadium in Jaipur.

Which TV channels will broadcast India vs New Zealand match?

The match will be telecast on Star Sports Network. The live streaming of the match will also be available on Disney+ Hotstar. Besides, you can browse Firstpost.com for live updates and over-by-over commentary.