Overall, the series was one with a lot of positives, but also a few areas that need improvement for New Zealand. However, it was hard not to think that if India had really cared about this series, it might not have gone so well. There was a lot more on the line for New Zealand, and they played like it too.

Tim Seifert and Colin Munro both had one big contribution and one supporting innings to be the top two run scorers for the series. Both of them played Bhuveneshwar Kumar with respect, and everyone else with very little respect. Munro, in particular, looked a completely different player to the version we had seen in the ODIs.

Williamson continued to look shaky, but still exuded class. By his own high standards, he has struggled this season, not really looking his usual self in either Sri Lanka or India series. However, Williamson has generally performed much better outside New Zealand than at home, and his form in UAE was magnificent. 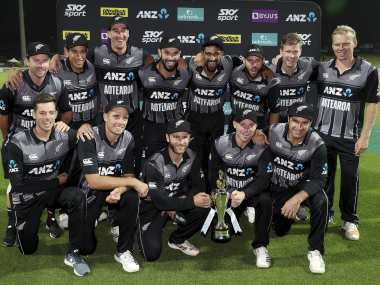 Ross Taylor managed to remind everyone both why he was dropped from the New Zealand T20 side and why he was recalled. His quick cameos in the first and third matches were outstanding, but he went into his shell too much in the second match, and effectively acted as a handbrake on the New Zealand innings.

Daryl Mitchell was both underwhelming and encouraging with bat and the ball. With the bat, he got out to a great catch in the first match, then sawn off in the second, before giving us a taste of his ability in the third match. With the ball, he was the top wicket-taker, but was quite expensive. Northern Districts use him solely at the death, with him often only bowling the 20th over, so having him bowl in the middle overs was somewhat different. His ability to take wickets is encouraging, but some of the wickets were as much batsmen's error as they were off great bowling.

Colin de Grandhomme showed why a lot of the public want him dropped, and why others think he should be the first name written on the team sheet. Two stunning innings, and one where he didn’t look interested attest to that dilemma. He’s got the ability to win a match in a couple of overs, but he also has the tendency to go missing at times too. The presence of Mitchell in the team means that de Grandhomme can be retained as a specialist batsman, and only bowl if conditions suit him, similar to the role that he plays for Auckland.

With the ball, New Zealand had three bowlers who really stood out: Tim Southee, Lockie Ferguson, and Mitchell Santner. At lower-level club cricket, most teams have one guy who is in his late 30s or early 40s whose uniform is now one or two sizes too small for him, and who runs in and bowls just above medium pace off a shortish run-up and manages to cause all sorts of problems for the opposition batsmen with a raft of well-executed subtle variations. Southee has turned into the international version of that player, just without the belly.

The old club medium-pacer is normally complemented by a young kid, not long out of school, running in as fast as he can and trying to frighten the batsmen. That role was played well by Ferguson, and not so well by Scott Kuggeleijn. Ferguson seems to have found the right balance between bowling a hard length and bowling full. In a series where every other bowler who bowled in more than one match went for eight runs or more an over, his 6.62 runs per over really stands out. He was probably the pick of the quick bowlers in the T20 Blast in England, and is certainly showing that he belongs in that format.

The ICC have him ranked at 99th in their bowling rankings, but that’s certainly going to improve if he keeps bowling like that. Kuggeleijn and Blair Tickner, however, did not look nearly as polished. Tickner tried some tricks, but did not look to have the batsmen under much pressure. Kuggeleijn looked bereft of ideas with the ball. It was like watching a fast bowler who had dominated at a lower grade take the step up and discover that his pace was no longer enough to get wickets.

New Zealand have had a habit of promoting bowlers for one or two matches, getting the bowling coaches to work with them, then sending them back to domestic cricket to work on certain parts of their game. It looks like that is the most likely next step for Kuggeleijn. It has worked very well for some players, while others never make it back. Kuggeleijn has a lot of talent, but it will require work to become the finished article. A little more time might help with the controversy that he’s attracting also, as the outrage over New Zealand Cricket’s perceived inaction over some of the revelations from his rape trials is not likely to last through another year.

Santner was the other star with the ball, very quickly discerning the right lengths and speeds to bowl in each venue. Ish Sodhi has the better record in T20s, but Santner outshone him in this series. It was interesting to see him opening the bowling, something that he’s done a bit for Northern Districts. The difference was that he opened bowling spin, while for Northern, he mixed it up, bowling some seam-up (although off the same action). His ability to bowl a slow-medium inswinger as well as the arm-ball that drifts out has made him a handful with the new ball in domestic cricket, and might be used in the World Cup also.

Sodhi bowled some great deliveries, and some poor ones. He possibly struggled with dew on the ball, but it was a forgettable series for him.

Overall, the series was one with a lot of positives, but also a few areas that need improvement for New Zealand. However, it was hard not to think that if India had really cared about this series, it might not have gone so well. There was a lot more on the line for New Zealand, and they played like it too.