India vs New Zealand: Don't write Jasprit Bumrah off, it's never over until the world’s premier death-overs pacer has spoken

You just know the game isn’t over till Bumrah has overs left. When was the last time you could say that of an Indian limited-overs bowler? 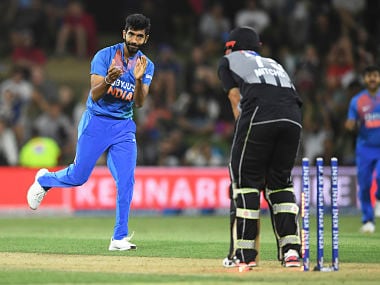 Right, we’d been here before, of course. Twice in just the past five days, in fact.

The same chasing team had needed two from four balls on Wednesday, and then seven from six on Friday. With two well-set batsmen in the middle on both occasions.

But the thing with bottling (read: choking in the cricket world) is that the likelihood of a bottle is directly proportional to the lack of time remaining in a contest. So when you have half your quota of overs remaining, instead of, say, one-tenth (or less, as we saw at Hamilton and Wellington), the odds of you succumbing from a position of strength are well diminished — even given the psychological scars of recent conversions of sure-shot victories into eventual defeats.

In these scenarios, for the opposition to cause a successful turnaround, you need something special. Something like Jasprit Bumrah.

At Mount Maunganui on Sunday, while India did go into the final 10 overs of the game with less than seven-per-over to defend and seven opposition wickets still intact, they happened to have three Bumrah overs up their sleeve. 30 percent of the remaining portion of the match. And as we’re now getting accustomed to, a lot can change in an even smaller percentage of a T20 match.

And as Harsha Bhogle put it, the game isn’t over till Bumrah has overs left.

Except, as the Kiwis at least would have thought, they seemed to have the wood on the world’s premier death-overs fast bowler. Four evenings ago, at Hamilton, India’s ace had, arguably, his most humbling outing as an international cricketer, as Kane Williamson took him apart in a manner deemed unimaginable until the point — the Black Caps skipper accounted for 36 runs from 15 deliveries as five Bumrah overs through the night were shellacked for 62 wicketless runs. His figures would improve significantly at Wellington, when the hosts had the benefit of playing Bumrah out cautiously given the lower target facing them; but again, in the Super Over, Bumrah would concede an un-Bumrah-like 13, most of which came off Tim Seifert’s blade — albeit with multiple strikes of luck.

One way or the other, if New Zealand felt they had a measure of India’s trump card, they wouldn’t have been terribly out-of-sync with reality.

When he returned to the attack to bowl the 12th over, shortly after that ill-fated 34-run over from Shivam Dube — his figures at the point reading 1-1-0-1 — the equation had come down to 57 from 54 balls. New Zealand now had the benefit of ‘seeing off’ Bumrah, which is just what Seifert and Ross Taylor chose to do in carefully taking six runs from the over.

By the end of Bumrah’s next over — his third, and the 14th of the innings — the equation had become 45 off 36, and New Zealand had two fewer wickets left to play with. Credit for that three-over patch, where India began to claw their way back into the game, must be shared between Bumrah and Navdeep Saini, for the youngest of the Indian pacers had conceded only three from the 13th over — and prized the crucial breakthrough of Seifert too.

Bumrah’s third over had ended with that delightful poster moment — a yorker, nailed to perfection, and through Daryl Mitchell’s defence. As of that point, New Zealand’s batsmen had faced 18 Bumrah deliveries, and been able to attack only two.

You read that right. CricViz data shows that only 11 percent of Bumrah’s first 18 deliveries had been attacked; the global average for all bowlers in T20Is is 59 percent, and Bumrah’s own mark in T20Is is 57 percent.

What that meant, especially with half the side now back in the pavillion, was that the Kiwis knew, within themselves, that this was now effectively 40+ from five overs and not 45 from six. That’s just the Bumrah effect.

It’s an effect that only heightens in nature and extent when he is backed up from the other end — and that support arrived, more than ably, through Saini and Shardul Thakur’s strikes through the crunch moments of this contest.

Eight-down at the end of 18 overs, 24 still to get. And one Bumrah over still to play.

You just knew there was nothing left in the game. You just know the game isn’t over till Bumrah has overs left. When was the last time you could say that of an Indian limited-overs bowler? How many bowlers, even globally, could you credit such a tag to?

We’ve, of course, known all this about Bumrah all along. But through his seasons of climbing up the game’s ladder — just over four years now since he won his maiden India cap — the skeptical doubt around Bumrah has been the same for most: what will happen when batsmen, inevitably, find a way to get past him?

The sample-size of that actually happening, so far, is microscopic. In four years and 50 matches of T20I cricket, Bumrah has only had four spells where he’s conceded more than 10 runs per over. That’s superhuman-enough in itself, but the champion in the 26-year-old lies in how quickly he’s regrouped from his rare off days.

The first three times Bumrah was hit for more than 40 from his four overs in T20Is, he followed up with these figures in the respective next games: 4-1-19-0, 4-1-24-2, 4-0-26-2. This fourth time around, following his Hamilton hiding, he returned 4-0-20-1 at Wellington. But you just know he wouldn’t have considered it a great success given the 13 runs that he unfortunately gave up in the Super Over. What happened next? 4-1-12-3 — his most economical four-over spell against a top-10 team in T20Is.

If you still need further numeric evidence of this generational beast, here goes. Even in this series — where runs were scored at 8.66 per over in the five games — and even with the pasting he received at Seddon Park, Bumrah finished with a series economy of 6.45 per over.

Keep him wrapped in cotton-wool, because no T20 will ever be over until Bumrah has had his say.