India vs England: How Kuldeep Yadav has stayed ahead by out-thinking batsmen, sticking to old-fashioned style of spin bowling

Kuldeep Yadav is conscious that even in the shortest format, his primary role is to take wickets and not be afraid of being hit for runs

During the Australia versus India one-day series last September, a journalist asked Kuldeep Yadav if he had the wood over David Warner after dismissing him on four of the past six occasions in all forms of cricket. Before the journalist could elaborate on his question Kuldeep stopped him in his tracks and said,“Sir, it’s actually four from last five”, before going on to say “I know what plans to use against him and I hope to get him out again in the next four matches.”

At the time, Kuldeep was still raw in international cricket and in a way he still is, but his honesty and revelations during media interactions gives an indication of a mature young man that thinks deeply about the game and has enormous belief in his own game.

While the modern-day spinners have focused on either bowling flatter through the air and tried experimenting or inventing a mystery delivery, Kuldeep has built his principles on the old-fashioned style of spin bowling – flight, drift and turn. Importantly, he has never been afraid to throw the ball above the eye-line of the batsmen, neither is he frightened to be pummelled out of the park. It is easier said than done, but Kuldeep credits his childhood coach for instilling such an optimistic outlook. 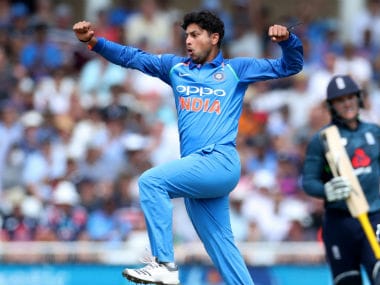 Kuldeep Yadav dished out his best ODI performance at Trent Bridge on Thursday with a haul of 6/25. Reuters

"When I was kid, my coach Kapil sir used to let me bowl from a standing start and let batsmen hit me for sixes. He used to say 'lets count and see how many they can hit off you'. In a way I was practising to be hit for sixes and the purpose of that was so in a match if I started getting hit for sixes I shouldn’t be feeling any pressure.” he revealed after taking five wickets in the first T20I in Manchester.

In his next outing, the English batsmen did get the better of him, but that didn’t stop Kuldeep from deviating from his core strengths. He had realised the England batsmen had worked out the trajectory of his googly was slightly loopy, so he decided to bowl his leg-spinner with the same flight. Kuldeep’s pace was a marginally slower in the first ODI than it was it during the second T20I in Cardiff. If the English batsmen had taken one step in deciphering him, he had already moved two steps clear.

Twice now Kuldeep has bamboozled Joe Root, England’s best batsman. In the T20I, he left him stranded outside his crease, stretched like a gymnast, as the googly dipped and fizzed past his front foot prod. Knowing Root will alter his method, Kuldeep bowled a lot fuller in the first one-day match, and trapped Root on the back foot with a big turning leg-break.

Similarly, Kuldeep had noticed Jonny Bairstow was failing to pick his wrong-un and was inclined to play him off the pitch on the back foot, so bowled a lot fuller and changed his line from outside the off-stump to the line of the stumps to ensure he cannot employ the sweep. Such was Kuldeep precision, he trapped Bairstow plumb in front trying to work his googly through the leg-side on the front-foot.

Behind all the skills, there is a brain that is continuously ticking. There have been bowlers that have the talent, but rarely can they out-think the batsmen on a regular basis. Kuldeep admitted the reason why England were able to dominate him in Cardiff was not due to poor execution, but rather the fact that he was not able to read the batsman’s mind. In Nottingham, he was aware of how England would try and tackle him. He was ready for the challenge and had all the answers.

In his nascent career so far, Kuldeep has shown the tendency to endlessly stay ahead of the game. He was aware of the fact that England had resorted to practising against a specially designed spin-bowling machine called ‘Merlyn’ after his heroics in the first T20I.

“But you see bowling machine doesn’t have all the arms and wrists. If I continue to spin the ball and they don’t pick me then I know it will be difficult for them.” he said after the game.

Kuldeep is conscious that even in the shortest format, his primary role is to take wickets and not be afraid of being hit for runs. The small English grounds don’t faze him and neither do any of the sixes that get hit off his bowling. If anything, it makes him think and look deeper into his game. He is a rare breed that is preparing to concede runs for the sake of taking wickets.

As he left the press conference, he was asked if he could replicate his tricks and trade in the longer format of the game. “We have two great spinners but I’m hoping for a comeback” – for the cricketing world and India that day might not be too far away.