Bangladesh were bowled out for 106 in less than three hours as India closed the day at 174 for three, taking a firm grip of the second and final Test of the series.

Kolkata: The first-ever day-night Test between India and Bangladesh may have generated an overwhelming response but visiting coach Russell Domingo on Friday said the pink ball cannot replace the red ball experience.

Bangladesh were bowled out for 106 in less than three hours as India closed the day at 174 for three, taking a firm grip of the second and final Test of the series. 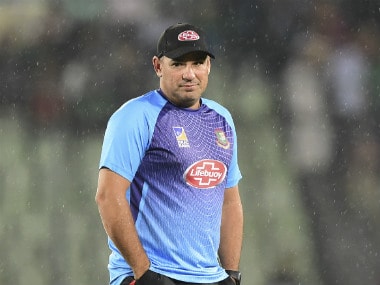 "Yeah, it's terrible today. We should never play the game. Look, I suppose on the odd occasion, there's nothing wrong with it. I don't think it's going to be the norm. I think the 10 o'clock start in the morning still gets everybody excited and nervous," Domingo said.

Earlier, Indian captain Virat Kohli, too, had felt the same.

"1 o'clock in the afternoon doesn't quite feel the same. It's already passed my bedtime. Normally I'm in bed at this time. So it's different. And it's something that you can do on the odd occasion. The excitement is there. It's fantastic but only occasionally," Domingo added.

Bangladesh were pressed into Day/Night Test at a very short notice after newly-elected BCCI president Sourav Ganguly convinced his BCB counterpart. There was no scope for a practice match, hampering their preparations.

"We had four days of practice time, but a practice game would have helped us just to give a guys a bit more time with the pink ball it would have been ideal but that's no excuse."

"We've got no qualms with the decision we made to bat first. Three seamers and a spinner on a good surface would have been good if you can get a good start with the bat. But it didn't happen first today," he said.

There was a rare failure for the Indian opening pair of Mayank Agarwal and Rohit Sharma, but Cheteshwar Pujara and Virat Kohli hit half centuries thereafter, as Bangladesh stared at another big defeat.

"We are long way behind in Test cricket. Look at Virat Kohli he has 26 hundreds and all our batsmen together we have got 17. It's something we need to address going forward."

Asked whether they had any visibility issues with the pink ball, he said, "Not at all. I mean when we started betting it was bright sunshine. No visibility issues at all, and in the first five or six overs, it looked like a flat wicket.