KL Rahul's significant contribution both with the bat and gloves in the second ODI against Australia has given birth to an idea. Can he be a long-term option as a wicket-keeper batsman to boost the balance of the side?

Bengaluru: KL Rahul's significant contribution both with the bat and gloves in the second ODI against Australia has given birth to an idea. Can he be a long-term option as a wicket-keeper batsman to boost the balance of the side? 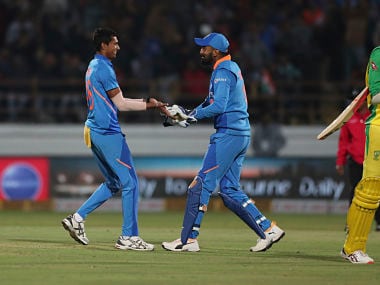 Rahul was just filling in for the injured Rishabh Pant in Rajkot but comparisons have already been drawn with the great Rahul Dravid. AP

Rahul was just filling in for the injured Rishabh Pant in Rajkot but comparisons have already been drawn with the great Rahul Dravid, who batted in the middle-order and kept wickets in more than 70 ODIs for the team's sake.

Though former India opener Aakash Chopra feels that Rahul is a better wicket-keeper than what Dravid was in his playing days, he feels the right-hander should not be given the dual responsibility.

"He is a better keeper than what Dravid was but I would not want him to keep on a regular basis. Keeping takes a toll. He can't be keeping for 50 overs and then batting higher up the order," Chopra told PTI ahead of the series decider here on Sunday.

"If somebody who is that good (with the bat) and if he can do another job, it doesn't mean that he should keep as well. Rahul is too precious a talent for me to slot in as a keeper batsman. That way, instead of managing his workload, you are increasing his workload.

"Once in a while if he has to keep for the team balance it is okay but in the longer run you have to allow him to score 10000 runs and that won't happen if he is being asked to keep," added Chopra.

Before the series, it seemed there was a toss up between Rahul and Shikhar Dhawan to partner Rohit Sharma at the top. However, skipper Virat Kohli, who has always shown a lot of faith in Rahul, accommodated both in the eleven, the latter playing at number three spot in Mumbai and five in Rajkot.

Former India wicket-keeper Nayan Mongia is also of the view that Rahul can't be the number one choice behind the stumps, at least in ODIs.

"He can be a good second wicket-keeper. He cannot be a permanent wicket-keeper in ODIs. T20s it is still okay but not in ODIs. There should be a regular keeper but he can be a second option," Mongia said.

"You need to have a specialist keeper anyway, Rishabh is there for that. Yesterday was just a chance to try Rahul out and he did reasonably well."

If Rahul does keep regularly, it does give Kohli the option of playing two all-rounders instead of one at the moment. Hardik Pandya, who is currently recovering from an injury, and Ravindra Jadeja can both play if Rahul is behind the stumps.

"His (Rahul's) batting will be affected if he is a regular keeper. He is more important to the team as a batsman than a wicket-keeper batsman, added Mongia.

Rahul himself has shown a lot of flexibility in the series, first with the bat and then putting his hand up for keeping. But like he said, "anyone" would do it for the Indian team.

"More than willing to bat anywhere and do any job that the team wants. It is not just me, anybody who is playing for the country will be willing to take up anything," Rahul said after the Rajkot victory.

On his keeping experience, he added: "It is (a challenge). Even for me, sometimes I couldn't pick Kuldeep and Jadeja. At the pace he (Kuldeep) bowls it is just pretty difficult, it is not what I get in my first-class team. I am just enjoying what is thrown at me and trying to do the best I can."