India vs Australia: Prithvi Shaw ruled out of first Test due to ankle injury suffered in tour match against CA XI

Teenage sensation Prithvi Shaw has been ruled out of the first Test against Australia due to an ankle injury, the BCCI confirmed on Friday.

Shaw suffered the ankle injury early on Friday morning while fielding in the tour match against Cricket Australia XI at Sydney. He suffered the injury on his left ankle while attempting a catch of opener Max Bryant at the boundary ropes. 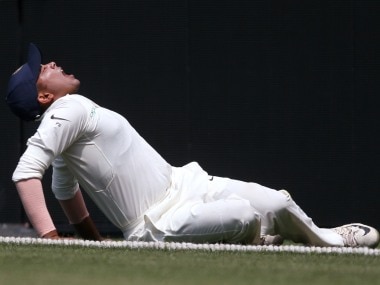 The 19-year-old rolled his left ankle when taking a catch on the deep mid-wicket boundary and tumbled over the rope.

He was carried off the field by India physiotherapist Patrick Farhart and a support staff member after which he was taken to a hospital for scans.

BCCI, in a media release, confirmed that Shaw had suffered a lateral ligament injury and that he will now undergo rehabilitation program.

"Shaw underwent scans this morning and the reports revealed a lateral ligament injury. Shaw will be unavailable for the First Test against Australia in Adelaide. He will undergo an intensive rehabilitation program to hasten the recovery and be available for selection at the earliest," BCCI said.

In his absence, KL Rahul and Murali Vijay are expected to open for India in the first match that begins on 6 December.