It was not the first time that Yadav took a hat-trick for his country. He had become the first Indian to take a hat-trick in the U-19 World Cup, achieving the feat against Scotland in the 2014 edition.

Kolkata: Chinaman Kuldeep Yadav stole the limelight in the second ODI against Australia by becoming only the third Indian to pick up a hat-trick in One-day Internationals.

With today's memorable feat, Yadav joined Kapil Dev (1991) and Chetan Sharma (1987) in a select club of Indians who have picked up a hat-trick.

The Australian batsmen failed to pick him up in Chennai and it was no different tonight. 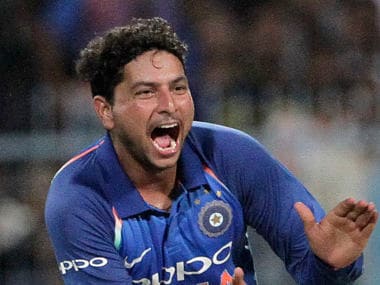 India's Kuldeep Yadav celebrates after taking his third wicket in the 2nd ODI at Eden Gardens in Kolkata, India. AP

It was an all-round bowling effort from India and Yadav joined the party by sending back Matthew Wade, Ashton Agar and Pat Cummins in as many balls to send the Eden Gardens crowd into a frenzy.

His best ball without a doubt was the hat-trick ball. The young spinner showed remarkable calm to bowl the wrong one that took a thick edge of Cummins' bat before landing into the hands of MS Dhoni.

Yadav had earlier got through Wade's stumps before trapping Agar infront of the stumps to be on a hat-trick.

It was not the first time that Yadav took a hat-trick for his country. He had become the first Indian to take a hat-trick in the U-19 World Cup, achieving the feat against Scotland in the 2014 edition.

Yadav said it was a special night for him.

"Initially I was struggling to bowl in a particular area. It is a game of cricket, everything happens. Last match, I was hit for three sixes in an over, it was a learning experience," he said.

Asked how he planned the hat-trick ball, Yadav added, "I asked Mahi bhai (Dhoni) what I should bowl, he said 'tujhe jaisa lagta hai wo daal (bowl what you want)'. This is special for me, changed the game for us. Really proud moment."