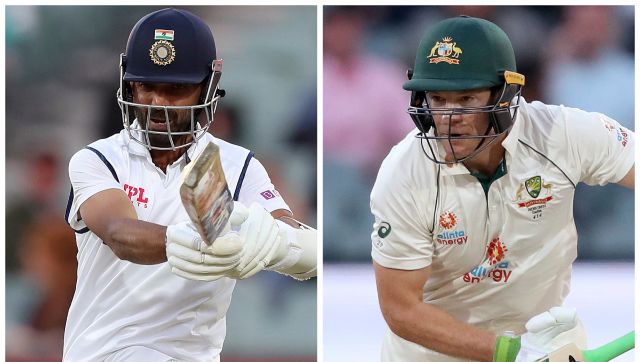 Cam Green replaces Josh Hazlewood now, conceding a wide off the second delivery after pitching it far outside off. Jadeja retains the strike with a single off the last delivery. Two off the over.

What a day for Team India! Ajinkya Rahane, given the task of pulling the side out of the gloom after the 36 all out disaster, dishes out perhaps the finest knock of his career with vital support from his teammates Gill, Vihari, Pant and Jadeja as the visitors stretch their lead to 82 at the close of play with five wickets still left.

The prospect of a 100-run lead would've delighted the Indians after they bowled Australia out for 195, and it took some brilliance and determination on the part of Rahane and Co to not only achieve the target, but also frustrate their opponents and force them to make mistakes after bowling brilliantly early on in the innings.

Hope you enjoyed our coverage of the second day of the Boxing Day Test. See you all tomorrow!

DROPPED! Yet another chance goes begging! Rahane gets a thick top-edge while attempting to fend a back-of-length delivery from Starc. Head runs forward from point with Green also running towards the ball from gully, the former diving to complete the catch, with the ball popping out of his palms in the last second.

The players however, leave the field right after that dropped chance with three balls still left in the over, with stumps on Day 2 being called early due to various factors — a bit of drizzle, poor light, litter on the field caused by the spectators (we forgot their presence in the stands isn’t always pleasant now did we?) as well as Rahane needing a bit of attention on his right hand after the blow.

Cam Green replaces Josh Hazlewood now, conceding a wide off the second delivery after pitching it far outside off. Jadeja retains the strike with a single off the last delivery. Two off the over.

Lyon brought into the attack now as Cummins is given a breather after a four-over burst with the second new ball. Jadeja nearly inside-edges the ball onto the stumps off the second delivery. The all-rounder then collects a single off the last delivery to retain the strike.

One milestone leads to another as Rahane brings out another lovely drive off the last delivery of Hazlewood’s 21st over, this time bringing up the century stand with Jadeja for the sixth wicket — a partnership that is put the visitors firmly in control.

FOUR! Lovely punch through extra cover by Rahane as he brings up another milestone with a boundary, this time the century stand with Jadeja for the sixth wicket off 179 deliveries. IND 273/5

Rahane brings up his 12th Test century in style with a well-timed cut behind square on the off side for a boundary, taking 195 deliveries to bring up the milestone. He is however, pinged on the glove off the last delivery after Cummins digs in slightly short, the skipper wincing slightly after the blow.

FOUR! CENTURY for Ajinkya Rahane — his 12th in Test cricket, his first across formats in more than a year and definitely one of the finest of his career! Brings up the milestone with a well-time cut through backward point off Cummins in the 88th over, taking 195 balls to get to the milestone. First century of this Test series!

Rahane drives the ball towards mid off, where Starc appears to have hurt his knee while collecting the ball — cause for concern for the Aussie camp. The India skipper collects three off the fourth ball after guiding the ball behind square on the leg side, moving to 96 in the process.

Cummins continues from the other end. Rahane guides the ball towards fine leg for a single off the first delivery, moving to 90, before being brought back on strike after Jadeja adds one run to his score next ball. Rahane pulls towards in front of square off the penultimate delivery, collecting a brace, before retaining the strike with a single off the last ball.

FOUR! Lovely punch through extra cover by Rahane as he brings up another milestone with a boundary, this time the century stand with Jadeja for the sixth wicket off 179 deliveries. IND 273/5

FOUR! CENTURY for Ajinkya Rahane — his 12th in Test cricket, his first across formats in more than a year and definitely one of the finest of his career! Brings up the milestone with a well-time cut through backward point off Cummins in the 88th over, taking 195 balls to get to the milestone. First century of this Test series!

Fifty partnership up between Rahane and Jadeja, the latter pushing the ball down the ground for a single to bring up the milestone! IND 223/5; lead by 28

FOUR! Streaky boundary for Rahane as his luck continues to shine. Edges this through the gap between keeper and first slip off Starc's bowling, neither having the reflexes to grab this one. 200 up for the visitors with this shot! IND 202/5

FOUR! Rahane opens the face of his blade and plays this with soft hands, guiding the ball between gully and the slip cordon for a four! The visitors are in the lead now! IND 198/5

50! Talk about rising to the occasion. Stand-in skipper Ajinkya Rahane shows India the way as he completes his half century, with a tickle down the leg side for a four.

OUT! Australia desperately needed a breakthrough and Starc has come to their rescue. Pant departs for 29 after edging one to Paine behind the stumps. Extra bounce from Starc did the trick there. Pant c Paine b Starc 29(40)

OUT! One wicket quickly fetches another, as Tim Paine collects a screamer behind the stumps after an outside edge off Pujara's bat, resulting in the fall of India's third wicket! The umpire signals drinks after that dismissal. IND 64/3

OUT! Shubman Gill misses out on his half-century on debut by just five runs, as Pat Cummins' persistence pays off off the last delivery of the 22nd over with an outside edge that carries all the way into the keeper's gloves. A loose shot, attempting to drive the ball moving ever-so slightly away from the bat in the last second, with the feet hardly moving to begin with. IND 61/2

FIFTY partnership up between Shubman Gill and Cheteshwar Pujara in the fourth over of the second day of the Boxing Day Test, with the latter running three off the fourth delivery of Hazlewood's fourth over to bring up the milestone. IND 50/1

India vs Australia 2020 Live score and latest update of 2nd Test at Melbourne: Cam Green replaces Josh Hazlewood now, conceding a wide off the second delivery after pitching it far outside off. Jadeja retains the strike with a single off the last delivery. Two off the over.

Day 1 report: A resilient India bounced back from their embarrassing first Test exploits to bundle out Australia for just 195 and take a grip on the second Test in Melbourne after a riveting opening day on Saturday. R Ashwin claimed the crucial scalp of Smith, who was undone by an off-break with Pujara holding a catch at slip after the world's top batsman faced just eight balls. AFP

After their horror show in Adelaide last week, where they lost by eight wickets and were skittled for 36 in their second innings, the tourists were desperate to start well.

And they delivered after Australian captain Tim Paine won the toss and chose to bat in front of 27,615 socially-distanced fans, just short of the maximum allowed under coronavirus restrictions at the Melbourne Cricket Ground.

On a pitch offering turn and bounce, the hosts found it hard going against a high-quality attack led by Jasprit Bumrah (4-56), Ravi Ashwin (3-35) and the impressive Mohammed Siraj (2-40), making his debut for the injured Mohammed Shami.

Marnus Labuschagne top-scored with 48 but that was as good as it got.

It left Indian openers Shubman Gill, also on debut, and Mayank Agarwal needing to negotiate 40 minutes at the end of the day.

Agarwal was not up to the task, trapped lbw by a Mitchell Starc in-swinger in the first over.

Gill was dropped on five by Labuschagne but otherwise looked comfortable, smacking five boundaries to reach 28 and help steer India to 36 for one at close with the experienced Cheteshwar Pujara unbeaten on seven.

"In the first session we were just trying to bowl in the rights areas," said Bumrah, who praised Siraj for "bowling his heart out".

He added that the plan on Sunday was for the batsmen to be positive, rather than conservative.

"We're just looking to control the controllables, not being reckless but being confident."

With Ajinkya Rahane captaining the side in place of Virat Kohli, who has returned home for the birth of his first child, India got off to a perfect start, getting Burns (0), Matthew Wade (30) and Smith (0) before lunch.

It left Australia in trouble but Labuschagne rode his luck, surviving two review decisions, to lead a recovery, putting on 86 with Travis Head (38).

Head had a nervous start but grew in confidence before Bumrah enticed an edge which carried to Rahane at gully, sparking a collapse.

Labuschagne looked set for a ninth half-century but a brilliant catch by Gill ended his vigil and handed Siraj his first Test wicket.

All-rounder Cameron Green ground out 12 before he too fell to Siraj, then an excellent catch by Hanuma Vihari off Ashwin accounted for Paine (13).

"We had probably three innocuous dismissals that we probably didn't need to, frustrating dismissals and they were guys who were set and in," said Labuschagne.

"Just need to be better there ... that whoever gets in on the day, whether myself or anyone else in the top order, we make sure we get big scores."

With David Warner still injured, the hosts went into the clash unchanged, with Burns opening alongside Wade.

Burns hit an unbeaten 51 in Adelaide to relieve some pressure after a long lean spell, but his performance Saturday will once more raise questions over his place in the team.

He looked tentative against Bumrah and got a nick to a delivery he should have left.

At the other end, Wade had an escape on four but started finding the gaps before attempting a big hit off Ashwin, which proved his downfall for 30.

Ravindra Jadeja took the catch, but only just with Gill also underneath it. The pair collided but Jadeja managed to hang on.

Ashwin claimed the crucial scalp of Smith, who was undone by an off-break with Pujara holding a catch at slip after the world's top batsman faced just eight balls.