India vs Australia: Amid fears of rain, spirited Hyderabad promises to 'show what we're made of'

Hyderabad is ready in every way. The stage is set for what promises to be a cracker of a grand finale of Australia's tour of India and the fans can hardly wait.

"I have come all the way from Rajasthan, only to watch this match. If Virat Kohli, Shikhar Dhawan, Rohit Sharma do well, it would be a great result for India," said Bhola Soni, as I met him outside the HCA Gymkhana Cricket Grounds on Thursday ahead of the third and final T20I between India and Australia at Hyderabad's Rajiv Gandhi International Stadium.

What made him travel hundreds of kilometres just for a cricket match? The answer was obvious. "Bahut dukh huya Guwahati mein haar gaye; aapna koi player nahi chala (we were very sad that India lost in Guwahati; none of our players clicked)," he said, before adding in no uncertain terms that it was the "josh" (enthusiasm) that had brought him to Hyderabad, and that he had come in anticipation of a top performance by the home team. 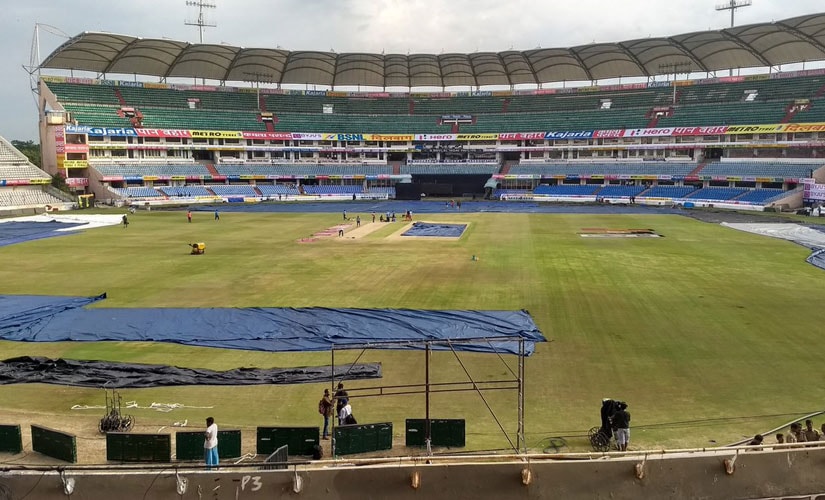 Indeed on Thursday afternoon, that josh was palpable among the sizeable crowd that had gathered at and around the ticket-distribution counters. People were seen stocking up on Kohli and Dhoni jerseys, India flags, caps and headbands in preparation for D-day on Friday, and were engaging in animated discussions on what India should do to ensure victory.

Two of them were Siddique and Zaheer. "I live in Saudi Arabia and am on vacation here. When I found out that India would be playing a T20I in our city, I simply couldn't miss it," Zaheer said with a big smile. "We had expected a whitewash in the ODI series, but we were unlucky to lose a match, but on Friday, we will definitely win," he added.

Siddique, however, feared rain might play spoilsport. "It has been raining quite a lot since last week; so the chances of the match happening may not be too great," he said, casting a sad look at the overcast sky. As a few drops of rain began to fall, I realised that Siddique's fears were not unfounded, especially given that the Meteorological Department had forecast thunderstorm accompanied by rain on Thursday and light to moderate showers on Friday.

"The ground staff, I am sure, will be prepared; the HCA officials were also saying that the drainage system at the ground is pretty good. So let's see," Siddique added. People were seen stocking up on Kohli and Dhoni jerseys, India flags, caps and headbands all in preparation for D-day. Firstpost/ Debdutta Bhattacharjee

The spectre of rain worried Sreedhar too. He is an IT professional in Hyderabad and avid cricket lover. He had watched matches in Chennai and Ahmedabad, but this will be his first match at the stadium in Hyderabad. Coincidentally, this will also be the first T20I that the Rajiv Gandhi International Stadium is hosting.

I approached him as he was busy bargaining with one of the vendors over a tricolour. "How much did you pay for it, finally?" I asked him. "They were asking for Rs 150, but I took it for Rs 80 in the end," he told me with a triumphant glint in his eye while proudly brandishing his new acquisition.

And then we moved on to some serious discussion on cricket, and immediately, he came across as someone who followed cricket closely. The quality of cricket analysis available on the streets and bylanes of India puts to shame some of the comments from 'experts'. The Indian crowd is knowledgeable and everybody has an opinion or two on cricket. No wonder then that cricket is considered more of a religion than sport in India.

"It has been raining for the past two weeks. It's not that there hasn't been sunshine, but there has been rain in the evening," Sreedhar said. I immediately knew what he meant, as I recalled my arrival in Hyderabad on Thursday morning. There were clear blue skies, but then the weather slowly started to turn murky.

"If the batting clicks, and if it doesn't rain, India will win easily. The Australians are not playing too well at the moment. One or two of the bowlers need to fire for India, but a lot depends upon the batting," Sreedhar noted. 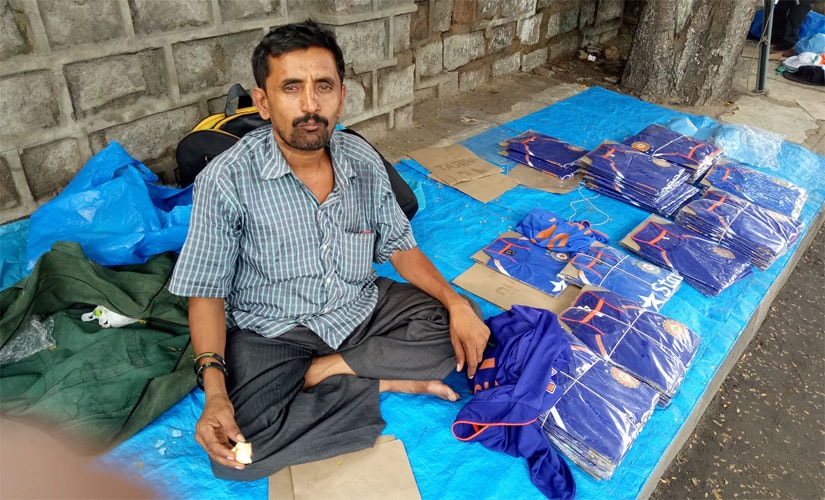 The vendors have already started to make brisk business. This man had come from Bengaluru to sell his wares. Firstpost/ Debdutta Bhattacharjee

His emphasis on India batting well and his concern because of the threat of rain both seemed valid when looking at the way the first two matches of the T20I series had gone. The much-vaunted Indian batting lineup crumbled in the last match at Guwahati, and could only set a target of 118 that the visitors overhauled without breaking a sweat, and the first match in Ranchi turned into bit of a farce, after India's target was reduced to 48 from six overs with the skies opening up. India got an immense advantage in Ranchi, but on another day, they could well have been on the wrong side of Duckworth-Lewis-Stern (DLS) — a rain rule as difficult to decipher as perhaps the Harappan script.

"In Guwahati, Kohli got out for a duck and (Mahendra Singh) Dhoni also got stumped. The Australian bowlers did well; (Jason) Behrendroff took four wickets and that pegged the Indian batsmen back," Sreedhar explained.

Wouldn't the visitors have an advantage, given that this is the home ground of their captain David Warner, who plays for Sunrisers Hyderabad (SRH) in the Indian Premier League (IPL), and especially given the fact that he had done well at the Rajiv Gandhi International Stadium? Warner has also had a few good scores under his belt in the ongoing tour. Moreover, Hyderabad is also 'home' to Moises Henriques, who played a high-quality innings in the last match. One of the mainstays of the SRH outfit, Henriques can also roll his arm over to good effect.

But Sreedhar seemed unfazed. "Look at the Australian squad in totality. IPL is a different kettle of fish. The record books say that Australia as a team have declined since the reign of Ricky Ponting," he said.

Siddique, similarly, didn't want to read too much into Hyderabad being Warner and Henriques's 'home' ground. "Bhuvneshwar Kumar is also a Sunrisers player. This is his 'home' ground too," he quickly retorted.

"Bhuvneshwar is a 'local' player of Hyderabad now; this is his 'home' pitch. Inshallah, he will keep going at the opposition," added Zaheer.

Certainly, if Warner and Henriques know the Uppal ground well, Bhuvneshwar knows it no less. The SRH pacer had been leading the Indian attack with some distinction in recent times, and along with Jasprit Bumrah, has taken over the mantle of leading India's pace attack from Umesh Yadav and Mohammed Shami, who seemed a certainty in the starting XI during even the Champions Trophy in June. Think back to Bhuvneshwar's fantastic bowling at the Eden Gardens in Kolkata during the ODI series, which saw him send three Australian batsmen back at the cost of a mere nine runs in a little over over six overs. If the overcast conditions stay, Bhuvneshwar could generate some good swing.

"The Hyderabad pitch has a lot of runs in it. We are expecting a 200-plus score on this pitch," Zaheer declared, "All of us are eager to see Kohli and Dhoni play; if both of them bat well, there will be nothing like it."

"You can't forget the Indian spinners though," I told him. "Absolutely. We are looking at Kuldeep Yadav. He got a hat-trick (in the second ODI in Kolkata). He couldn't do much in Guwahati because he was playing with so few runs," he replied.

And whether or not it rains on Friday, the vendors have already started to make brisk business. One of them stated that he had come from Bengaluru to sell India flags, jerseys and caps. "We are praying that the rain stays away," he said.

The stage is set for what promises to be a cracker of a grand finale in Hyderabad and the fans can hardly wait. Before I left the ticketing area, the topic of low attendance at the Eden Gardens came up. Sreedhar reasoned, "But Eden Gardens is a historical place. There have been so many memorable matches that were played there; it has a value of its own. As far as the support is concerned, Bengalis are second to none, but kal hum bhi dikhayenge hum Hyderabadi kya hai (we will show what Hyderabadis are made of)."

In every measure, Hyderabad is ready.