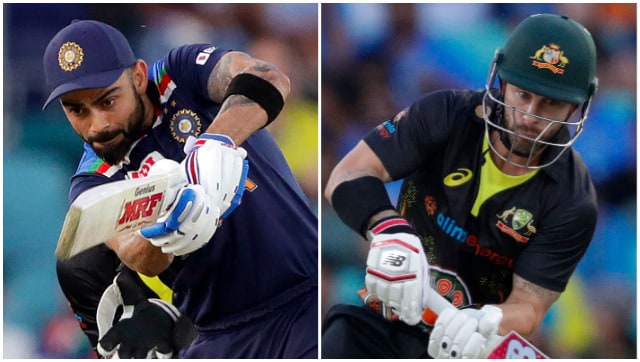 Sams bowls the final over. Pandya works the first ball towards backward square leg for a brace. Pandya gets a length ball served to him second ball, which is promptly smashed over wide long on for a maximum. Dot off the third, as Sams bowls this real short. Pandya then seals the game — and the series — with a powerful heave over the cow corner boundary as India win by six wickets with two balls to spare!

India suddenly are looking a different unit now than they did in the first two one-dayers, which were played at the same venue, as they chased the challenging 195-run target down with six wickets to spare. Virat Kohli, Shikhar Dhawan and Hardik Pandya all came good for the Men in Blue, with Pandya unleashing his absolute best with the bat that he had so frequently dished out during Mumbai Indians’ successful IPL 2020 campaign. However, the most important contribution perhaps came for T Natarajan, whose 2/20 cost the Aussies 10-20 runs in the end.

With the series already in the bag, India have the room to rest a couple of senior players ahead of the crucial test series. However, given Kohli’s approach as a skipper, it is unlikely he will take the foot off the pedal and target anything below a 3-0 scoreline.

Do join us in two days’ time for the third and final T20I, which also takes place at the Sydney Cricket Ground. For now, we bid you all good bye!

India skipper Virat Kohli: We played really well as a team in T20 cricket. The fact that two of our established players are not playing and to win like this, it makes me very proud of this team. Everyone has played 14 games recently (in the IPL) and they know their plans. Natarajan was outstanding and Shardul was good today. Hardik finishing off the game and Shikhar getting that fifty, it's a whole team effort. The reason for him to come into our team in 2016 was pure abililty, he now realizes that this is the time to establish in that role and play match-winning knocks for us. He plays with all his heart and he certainly got that competitive nature about him and also has the skill to execute that at the highest level. My scoop shot over fine leg, I wasn’t expecting it as well. I will send AB a text tonight and see what he thinks of it.

Hardik Pandya, Man of the Match: I really like to see the scoreboard and play so I know which ball or the bowler you can target. My game is always around the confidence which I carry, it has that fine line where I back myself and not become overconfident. I have been in situations like this before and learned from my mistakes. We always have more time than we think we have. I thought Australia were 10 runs short. So, credit goes to Natarajan as well.

Matthew Wade, Australia captain: It was good fun. We might have been a little bit short with the bat, but not by many. We didn’t quite execute towards the end. The no-ball (by Tye) swung the momentum in their favour. Bit disappointed to get out when I did. All in all, we played some good cricket. Just didn’t execute at a couple of points in the game. It was great to see Swepo (Swepson) bowl well again. Zampa was class. These guys have played a lot of T20 cricket. Unfortunately couldn’t execute it in the end.

This is India’s 10th consecutive victory in T20Is. 195 is also the second highest target successfully chased at SCG in T20Is.

Sams bowls the final over. Pandya works the first ball towards backward square leg for a brace. Pandya gets a length ball served to him second ball, which is promptly smashed over wide long on for a maximum. Dot off the third, as Sams bowls this real short. Pandya then seals the game — and the series — with a powerful heave over the cow corner boundary as India win by six wickets with two balls to spare!

SIX! Hardik Pandya finishes it off in style! Smashes the full delivery over the cow corner fence off Sams to finish unbeaten on 42 off 22 deliveries, as India win by six wickets to gain an unassailable 2-0 lead in the series! IND 195/4

Tye’s given the crucial penultimate over. Pandya collects a brace off the first delivery, before missing the next two balls completely as the seamer mixes his pace up. Full toss off the fourth, and this time Pandya slices it over third man for a boundary. Another boundary next ball, this time Pandya smacking it over cover. He then collects a single off the last delivery to keep the strike. India need another 14 off the last six deliveries!

FOUR! Back-to-back fours for Pandya off Tye, this one smacked over cover! IND 180/4

SIX! Hardik Pandya finishes it off in style! Smashes the full delivery over the cow corner fence off Sams to finish unbeaten on 42 off 22 deliveries, as India win by six wickets to gain an unassailable 2-0 lead in the series! IND 195/4

OUT! Smart work by Sams after watching Kohli make room for himself while stepping out of his crease! Alters his line and length right away, with the ball brushing past the toe-end of Kohli's bat, with Wade timing his jump well to complete the catch behind the stumps. Could've been a wide had the India skipper left it alone. IND 149/4

OUT! Swepson notices Samson charging down the pitch, and alters his length accordingly. Samson looks to slap this down the ground, but doesn't quite get the elevation and distance required to clear the boundary rope, resulting in a simple catch for Smith near the rope. IND 120/3

OUT! Massive wicket for the Aussies as Dhawan departs shortly after bringing up his half-century, getting a thick top-edge off a slog-sweep that results in an easy catch for Swepson at deep square leg. IND 95/2

Fifty up for Shikhar Dhawan — his 11th in T20I cricket! Fine innings from the left-handed opener today to make up for the blip in the previous game, his aggression keeping India's chances in this game alive! Takes 34 balls to get to the milestone. IND 91/1

OUT! Slower ball does the trick for Andrew Tye as he gets rid of the dangerous Rahul to end the flourishing opening partnership. Rahul went for a full-blooded inside-out heave, but never got the distance. Easy stuff for deep extra cover. IND 56/1

Fifty partnership up between Rahul and Dhawan in just 4.5 deliveries! How things have changed for the Indians after that front-foot no-ball by Tye! Rahul brings up the milestone with a single. IND 50/0

The responsibility of bowling the final over has been given to Chahar. But he concedes 17 runs off it. Stoinis cuts the penultimate delivery over point for a maximum, before running a triple off the last. It’s a game of margins they say, how costly will the final over be for India?

OUT! Third wicket down for Australia. Mad Max departs. Maxwell goes hard at the ball, didn’t get the distance though. Comfortable catch for the point fielder. Maxwell c Washington Sundar b Thakur 22(13)

OUT! Big wicket, Wade departs. Kohli dropped a dolly inside the inner ring but still, he quickly threw the ball towards Rahul, who completed the formalities. Wade was way outside his crease and it was never a run. Big wicket for India, considering Wade’s good touch.

50 up for Wade in just 25 balls and he got there in style, smacking a lovely boundary off the back foot through extra cover.

File image of India skipper Virat Kohli with Matthew Wade, standing in as Australia captain for Aaron Finch in the 2nd T20I. AP

India vs Australia 2020, Live Cricket Score, 2nd T20I Today’s Match: Sams bowls the final over. Pandya works the first ball towards backward square leg for a brace. Pandya gets a length ball served to him second ball, which is promptly smashed over wide long on for a maximum. Dot off the third, as Sams bowls this real short. Pandya then seals the game — and the series — with a powerful heave over the cow corner boundary as India win by six wickets with two balls to spare!

Preview: After suffering defeat in the one-day international (ODI) series, Virat Kohli's men bounced back in style to kickstart the T20I series against hosts Australia on a winning note.

The 11-run win in the first T20I must have boosted the team's confidence and they seem a much better and balanced side in T20Is. But despite the win, India are a little worried after Ravindra Jadeja was ruled out of the T20I series. He was hit by a bouncer on his head helmet and he felt dizzy as he went into the dressing room after the end of first innings.

He was later substituted by Yuzvendra Chahal in the game, who picked up three wickets for the visitors. Not to forget, Jadeja has shown immense maturity in the last two games for India, in the 3rd ODI and the first T20I, where he batted with added maturity.

His absence means India lose the services of yet another all-rounder, with Hardik not allowed to bowl yet. File image of India skipper Virat Kohli with Matthew Wade, standing in as Australia captain for Aaron Finch in the 2nd T20I. AP

On the other hand, Aussies are also dealing with injury issues with Ashton Agar ruled of the first T20I and David Warner out for some days with groin injury. Aaron Finch and Co would be eager to make a comeback in Sydney where they have enjoyed playing so far against India.

Australian coach Justin Langer will have his task cut out to get the best out his batsmen, who looked less than ordinary on the night against spin. It is a given that Chahal would be playing in the second T20I and handling his spin would be a difficult task for the hosts.

He along with Washington Sundar bowled magnificently in the middle overs to push Australia back during the chase.

Virat Kohli would also be itching to make a comeback in T20I series after his failure with the bat in the first game. The SCG has not been a happy hunting ground for the visitors and Kohli would be looking to change that in the second T20I.

Here’s all you need to know about when and where to watch the second T20I:

When is the second T20I between Australia and India?

The second Australia vs India T20I match will be played on Sunday, 6 December.

Where will the second T20I between Australia and India be played?

The second Australia vs India T20I match will be played at the SCG in Sydney.

At what time will the first T20I between Australia and India start?