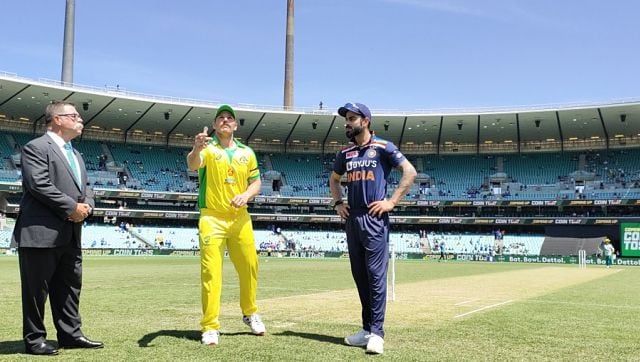 India vs Australia 2020, Live Cricket Score of 1st ODI Match: It's over. Chasing 375 always going to be tough for the visitors. India crossed the 300-run mark but Australia won the match by 66 runs. Finch and Smith scored centuries, Zampa picked four wickets while Hazlewood took three in his 10 overs. A day to forget for Virat Kohli and Co.

That's all from us now. Australia's batting proved to be the difference today. Superb centuries from Aaron Finch and Steve Smith as well as good support acts from Glenn Maxwell and David Warner. Poor effort from India. Fielding was also not up to the mark. Virat Kohli will hope his team will come back stronger on Sunday.

See you soon guys, have a good one.

Aaron Finch, Australia skipper: I found it reasonably hard to get my timing. I took a couple of chances every now and then and got lucky. We’ve barely been together as a team. There hasn’t been a conscious effort to play a certain way. You make sure you’re playing to your strengths. Smudge was a different class altogether. Maxwell’s got the ability to just click his fingers and put pressure back on the opposition.

Virat Kohli: "We got enough time to prepare, I don't think there's any excuses on the field when you don't pull up as a side. Probably the first long game we've played in a while. I think body language on the field after 25-26 overs was disappointing. We have to find ways to get few overs from our part-timers. We wanted to play positive cricket. We just needed to have a big innings from the top three, 130 or 140, which didn't happen unfortunately."

Steve Smith: "Been searching for something for couple of months now. Just three days ago something clicked, and my rhythm came back. I thought Davey and Finchy played exceptionally well up top. I was sort of just seeing the ball and hitting it, and not really thinking much. It was a good surface. Fortunately came off today. Nice to contribute to a win."

Steve Smith is the Player of the Match for his blazing 105 off 66 balls!

All the defeats occurring in the Trans-Tasman region

It's over. Chasing 375 always going to be tough for the visitors. India crossed the 300-run mark but Australia won the match by 66 runs. Finch and Smith scored centuries, Zampa picked four wickets while Hazlewood took three in his 10 overs. A day to forget for Virat Kohli and Co.
Full Scorecard

Starc bowls the over, there's an appeal for caught behind. Down leg and Australia take the review as they think Shami has nicked it. Nothing on Hot Spot and UltraEdge so the onfield call of not out stays. Two runs from the over.

Steve Smith is the Player of the Match for his blazing 105 off 66 balls!

It's over. Chasing 375 always going to be tough for the visitors. India crossed the 300-run mark but Australia won the match by 66 runs. Finch and Smith scored centuries, Zampa picked four wickets while Hazlewood took three in his 10 overs. A day to forget for Virat Kohli and Co.

Jadeja bites the dust. Plays the big shot but hits it to the fielder at long-on. Zampa gets his fourth wicket of the night. Jadeja c Starc b Zampa 25(37)

Zampa does it! Tossed up, Hardik goes for the big hit straight down the ground but fails to clear the fielder. Huge wicket for Australia. Hardik Pandya c Starc b Zampa 90(76)

Dhawan comes down the track but fails to beat the fielder at mid-off. A good knock comes to an end. Zampa with the wicket. Dhawan c Starc b Zampa 74(86)

Low full toss from Zampa and guess what? Rahul hits it straight to the cover fielder. Rahul c Smith b Zampa 12(15)

Another one bites the dust! Pace and bounce from Hazlewood, Shreyas Iyer in two minds, whether to play or leave it. As he tries to move away, the ball makes contact with the bat and simple catch is taken by the keeper. Shreyas Iyer c Carey b Hazlewood 2(2)

GONE! Hazlewood gets the big wicket of Kohli. Short delivery, Kohli comes down the track and hits the ball straight to Aaron Finch at mid-wicket. Kohli c Stoinis b Hazlewood 21(21)

Hazlewood sends back Mayank. Short, Mayank moves away and tries to hit the ball through the air but gets no proper connection. Simple catch to Maxwell at point. Agarwal c Maxwell b Hazlewood 22(18)

OUT! End of an innings of the highest quality from Steve Smith as Shami rattles the stumps to send the talismanic No 3 back to the hut for 105! Smith's livid with himself as he makes his way back amidst an applause from the spectators. AUS 372/6

It's a blazing 62-ball ton for Steve Smith today as he brings up his 10th ODI hundred with a single off Bumrah in the penultimate delivery! AUS 360/5

OUT! Labuschagne's slog over long off fails to clear the boundary rope! Dhawan gets under the ball, and there's no misjudgement on his part this time as he brings out the thigh slap after collecting the catch. AUS 331/5

OUT! Jadeja is not one to let go of chances! Maxwell decides to go downtown off Shami's bowling, but doesn't get the distance over long on! AUS 328/4

OUT! Stoinis departs for a golden duck as he nicks the ball to Rahul while looking for a cut, giving Chaahl his first wicket in his penultimate over of the day! AUS 271/3

OUT! Bumrah finally strikes, bringing Aaron Finch's stay at the crease to an end off the last delivery of the second powerplay! AUS 264/2

FOUR! Another misfield has cost India runs, this time by Agarwal at deep square-leg as Finch brings up the 100-stand with Smith! AUS 258/1

CENTURY FOR AARON FINCH! His 17th in ODI cricket, fourth against India and the first of the Australian cricketing summer! Brings up the milestone with a brace off Chahal in the 39th over of the innings! AUS 245/1

FOUR! Back-to-back hits to the fence by Smith off Shami, this one bringing up his half-century off just 36 deliveries! AUS 235/1

OUT! India take 27.4 overs to collect their first wicket of the series! And Shami it is who gets the breakthrough for the Men in Blue, getting David Warner caught-behind after a solid start! Full delivery from the pacer, Warner looks to steer this through the off side but ends up getting a faint bottom edge that the umpire fails to notice initially — with the TV umpire ultimately overturning his 'Not Out' decision after Kohli goes for the review. AUS 156/1

150 of the partnership up between Finch and Warner for the first wicket — the Aussie skipper bringing up the milestone with a single off the second delivery of the 28th over! AUS 150/0

Fifty for David Warner off 54 balls — his 22nd in one-day cricket. Clips the ball towards the leg side off Jadeja, getting enough time to race back for a second to bring up the milestone. AUS 121/0

Hundred of the partnership up between openers Aaron Finch and David Warner! The former, who had brought up his half-century earlier in the over, collects a single off the last delivery of the over to bring up this milestone. AUS 100/0

Fifty up for Aaron Finch off 69 deliveries! He may have had a stop-start run in IPL 2020, but he's certainly doing his part with the bat in the canary yellow! His 28th half-century in one-day cricket. AUS 98/0

Fifty partnership up between Aussie openers David Warner and Aaron Finch! The skipper sets off for a run after getting hit on the thigh off the third delivery of the 10th over to bring up the milestone! AUS 50/0

India vs Australia 2020, Live Cricket Score of 1st ODI Match: It's over. Chasing 375 always going to be tough for the visitors. India crossed the 300-run mark but Australia won the match by 66 runs. Finch and Smith scored centuries, Zampa picked four wickets while Hazlewood took three in his 10 overs. A day to forget for Virat Kohli and Co.

Preview: A new world and a different shade of retro blue awaits a circumspect Indian cricket team which re-enters the international arena without a white-ball colossus in Rohit Sharma, facing the might of a menacing Australia in the first ODI in Sydney on Friday.

The absence of an injured Rohit Sharma will certainly leave a gaping hole at the top of the order, something that skipper Virat Kohli wouldn't have fancied at the onset of a gruelling two-month tour.

Kohli's men, who had been on a COVID-enforced international break since the disastrous away series against New Zealand that ended early March, now kick-start their international calendar in a series where a lot of probing questions are expected to be asked.

For those who believe in superstition, the return of the 1992 World Cup's navy blue jersey isn't a good omen as one of India's worst performances (7th in 9 teams) happened in that particular edition.

For the more pragmatic, it will be more about how Kohli's men get their combination right in the absence of Rohit, whose injury has been a topic of national debate.

Whether it's the young Shubman Gill or the slightly more experienced Mayank Agarwal, whoever partners an in-form Shikhar Dhawan, the challenge of facing a Mitchell Starc or a Pat Cummins first up will still be an onerous one.

So 'King Kohli' again has his task cut out as he gears up to combat a high quality pace attack, which is likely to be complemented by the wrist spin of Adam Zampa, who has at times been the Indian captain's nemesis.

Facing an Australia team in their own backyard with a Steve Smith, who is getting back his rhythm, an eternally hungry David Warner and a future great in Marnus Labuschagne isn't the best of propositions and thus some priorities will be tested.

Here's all you need to know about watching the match on TV or online.

When is the first ODI between Australia and India?

The first Australia vs India ODI match will be played on 27 November.

Where the first ODI between Australia and India will be played?

The first Australia vs India ODI match will be played at the Sydney Cricket Ground in Sydney.

At what time will the first ODI between Australia and India start?