Australia had more positives to take away from the T20I series. On the other hand, India, who were expected to dominate, finished with a damp squib

Australia's stand-in skipper David Warner was so delighted that his second-string team could get away with a shared T20I series in India that he posted an Instagram selfie thanking India for hosting them!

He left it unsaid that India were indeed the perfect hosts — despite ramming down a 4-1 win in the ODI series, they allowed the Aussies to return home with their heads held high following a 1-1 draw in the T20Is.

On the other hand, India would have little to be proud of. The 1-1 drawn series was actually a climb down, especially considering India registered their win courtesy the rain and the silly Duckworth-Lewis rules.

Result of the T20Is apart, an interesting feature of the bilateral series was that nearly every member of the Australian side, Warner downwards, was adept at playing this brand of cricket on Indian soil. They all knew the opposition players and their capabilities in this format of the game exceedingly well. Summers spent playing successive editions of IPL had given them first-hand knowledge about opposition players, pitches and venues. 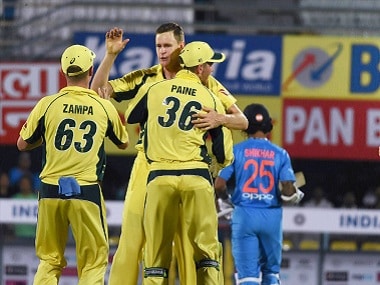 Paceman Jason Behrendorff was the find of the series for Australia. PTI

Thus, whatever home advantage India might have previously enjoyed was now blown out of the window, even before the series started. And other than access to local association officials, groundsmen and players, the Aussies were also already acclimatised to the conditions thanks to the ODI series. They were exceedingly comfortable with any fare thrown at them by the Indians, and could thus play the T20I series with rare freedom.

Nothing exemplified this change of approach and attitude than Adam Zampa rediscovering his mojo. Zampa had been blasted out of the park repeatedly in the ODIs, and his confidence had taken a beating, especially when bowling to Hardik Pandya.

But in the T20Is, he was a changed bowler. He still went for runs, but there was a lot more aggression and intent in his bowling. He got the ball to spin and bowled aggressive lines. Googlies stood him in good stead.

It was his dismissal of Mahendra Singh Dhoni that best captured his transformation from a meek spinner to a confident one. He tossed the ball up but kept the length short and spun it away from an advancing Dhoni. The batsman was beaten in flight and off the pitch and was left stranded outside his crease. This was as pretty a dismissal effected by any spinner in the home series.

Australia also discovered the ideal substitute for Mitchell Starc, latest left-arm pace bowler Jason Behrendorff. Behrendorff is as tall as Starc, and his left-arm pace as sharp and probing. He also showed the rare ability to swing the ball both ways from over the wicket. His dismissal of Rohit Sharma at Guwahati was textbook stuff. The pacer got the ball to come back into the right-handed batsman and trapped Rohit leg-before. In contrast, Manish Pandey was dismissed with a delivery that went with the angle to the slips.

He took four wickets in four overs, also accounting for skipper Virat Kohli and the dangerous Shikhar Dhawan. Wickets of four top Indian batsmen will set him apart as a special talent.

This was particularly satisfying for Australia as they were without the services of many of their top fast bowlers — Starc, Cummins, Jackson Bird, Josh Hazelwood, etc. However, Behrendorf, playing in only his second T20 international, bowled with the poise and confidence of someone who knew he belonged at this league.

Zampa and Behrendorff were certainly the finds of the series for Australia.

One wonders if the same could be said for India. The selectors needlessly brought back veteran Ashish Nehra into the squad, though thankfully he was not accommodated in the playing XI.

Meanwhile, Hardik Pandya did enough to prove that he could be the elusive all-rounder India were keen on. Kuldeep Yadav and Yuzvendra Chahal too continued to do enough to keep out proven spinners Ravichandran Ashwin and Ravindra Jadeja.

The bowling did pretty well for India in the T20Is, but the same couldn't be said about the batting. The middle-order does not inspire confidence, especially if a couple of early wickets are lost. Mahendra Singh Dhoni is in the evening of a great career while Kedar Jadhav, Pandey and Pandya need to show greater consistency.

In short, Australia had more positives to take away from the T20I series. On the other hand, India, who were expected to dominate, finished with a damp squib.