India Under-19 Vs Pakistan Under-19 LIVE SCORE (odi)

India Under-19 beat Pakistan Under-19 by 10 wickets

India Under-19 beat Pakistan Under-19 by 10 wickets 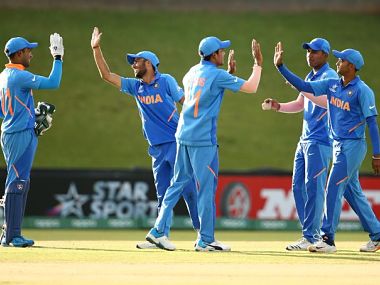 India vs Pakistan, ICC U-19 World Cup 2020 Semi-Final 1, Live Updates: HUNDRED! Jaiswal finishes it off in style. He has done, Tossed up delivery and he smashes this over cow corner for six, reaches his maiden U19 WC hundred and celebrates it by looking above and pumping his fist in the air later. India through to the final.

India reach the final. Well, they have made it a habit in junior World Cup. Indians were just too good for Pakistan today. The difference was how the nerves were handled. Kartik Tyagi started bowling attacking line from Ball Number 1. Jaiswal and Saxena looked at ease from Ball number 1 while chasing. Sheer calmness and composure by the opening batsmen outclassed the Pakistanis. India through to the final where they will either be playing New Zealand or Bangladesh. The final will be on 9 February. Do join us then. For now, take care and good bye.

Priyam Garg, India U19 captain: Very happy to reach the final. We are going to focus on the trophy. One step closer to it. I think we have the best pace attack in the tournament. All fast bowlers can build up good pace and spinners bowl right line and length. The spinners compliment the pacers well. This is not the first time they (Jaiswal and Saxena) have done this. They have been batting like this for last one year. They have great co-ordination. They also come from the same state so thay understand each other very well. I think we would like to focus on the same process and play the final as just another game.

Pakistan captain Rohail Nazir: We didn't have enough runs on the board and the wicket looked good for batting in the second innings. We should have scored more and we had two decent partnerships in the middle-overs and when too many wickets fall, the pressure obviously mounts and I had to score a boundary and that plan didn't work too. India were brilliant in the field. We were always on the backfoot. They batted really well so full credit to them. The boys have a lot to take from here. I'm sure we'll learn how to comeback in such crunch situations.

Teams reaching into ICC Under-19 World Cup final most times:

Highest stands for India in Under-19 World Cup:

Players to score a century in Under-19 a World Cup semi-final match:

Yashaswi Jaiswal is Player of the Match for his unbeaten 105.

Jaiswal: It is a dream come true for me. I am happy. I did this for my country. I will never forget this ever. This hundred against Pakistan in a World Cup. This is a start. I will work harder. We were talking that we need to stay there as wicket was pretty good to bat on. Pakistan bowled well initially but we planned to stay as long as possible. It is all hardwork. All of us, physio, support staff, their effort has worked wonders. Also, so many Indians who have prayed for us.

India are in final!
HUNDRED! Jaiswal finishes it off in style. He has done it, tossed up delivery from Aamir and he smashes this over cow corner for six, reaches his maiden U19 WC hundred and celebrates it by looking above at the heavens and then punching his fist in the air later. India through to the final. And what a peformance this has been from the boys in blue. Still unbeatable since the 2016 World Cup final defeat. Magnificent.

Qasim back on. Just one over for Tahir. He had bowled a maiden over but has been taken off strangely. Jaiswal making full use of the opportunity and smashes one for a maximum, then takes two to reach 99. Five to win. One for Jaiswal's ton. Will he get it?

FOUR! Short ball from Qasim, Jaiswal goes on back foot and smashes to cow corner for a boundary.

India are in final!
HUNDRED! Jaiswal finishes it off in style. He has done it, tossed up delivery from Aamir and he smashes this over cow corner for six, reaches his maiden U19 WC hundred and celebrates it by looking above at the heavens and then punching his fist in the air later. India through to the final. And what a peformance this has been from the boys in blue. Still unbeatable since the 2016 World Cup final defeat. Magnificent.

Half century for Divyaansh Saxena. He has been rock solid and along with Jaiswal has taken India very close to the final spot in the U19 World Cup. Top knock, his second fifty in the tournament.

FOUR! Finds the gap on the leg side and Jaiswal collects four runs at deep mid-wicket, reaches his fifty, in a semi-final, raises his bat and shows everyone the team he plays for, by pointing at his jersey - INDIA!

Qasim continues. Jaiswal collects two boundaries in the over, one with a on drive and another with a cover drive. Textbook batting happening currently in the middle. Eight runs off the over. Fifty has also come up for India on the board.

OUT! Sushant Mishra picks up the last wicket off Pakistan's innings. Aamir Ali departs. Mishra digs it short, the batsmen tried the pull and the ball went straight to Siddhesh Veer at cover.

Pakistan have been bundled out for 172. Sheer dominance from the Indian bowlers!

OUT! No, Nazir, what have you done! Short ball from Akash and it skidded on to the skipper, who ended up hitting it straight to short mid-wicket. Can Pakistan play out the remaining overs?

Tyagi back for his fifth over. He really has been the standout speedster in the tournament and match so far. Pitches the first two deliveries wide outside off, Haider picks up a single off the second as he pushes the drive wide of backward point. Gives width to Nazir on the third delivery and the batsmen steers it towards third man for a double. The current run-rate is 3.67 — so far good display by the Indian bowlers.

Time for the drinks break!

Watch out for Bishnoi. Bowls one which was moving away from the Munir, the left hander tried to smack it towards point but hit it straight to Ankolekar.

Hello and welcome to our live coverage of the ICC U-19 World Cup!

Today sees four-time champions India take on two-time winners Pakistan in the Semi-Final 1. These two teams have a storied rivalry in cricket, and today's encounter should be no less thrilling than any of the other nail-biting matches that have taken place over the course of this tournament's history, so stay tuned as we bring you all the latest updates!

India vs Pakistan, ICC U-19 World Cup 2020 Semi-Final 1, Live Updates: HUNDRED! Jaiswal finishes it off in style. He has done, Tossed up delivery and he smashes this over cow corner for six, reaches his maiden U19 WC hundred and celebrates it by looking above and pumping his fist in the air later. India through to the final.

Preview: Cricket fans will be up for a treat when India and their arch-rivals Pakistan square off in the ICC U-19 World Cup 2020 semi-final 1 clash. This will be the tenth time both the countries’ respective youth sides meet in the U-19 World Cup, with Pakistan having won five of the previous nine meetings.
The last time the two teams met in the global tournament was not too long back and was at the exact same stage – the semi-finals in 2018. The Boys in Blue rode on Shubman Gill’s century to register a total of 272-9 in Christchurch, and Ishan Porel ran riot during Pakistan’s run chase to finish with four wickets as the Boys in Green were bundled out for just 69 runs.

Yashasvi Jaiswal has been India’s top-scorer in this edition, amassing 207 runs with three fifties to his name.

Meanwhile, leg spinner Ravi Bishnoi has impressed with his brilliant bowling in the tournament so far. He features in the top-10 wicket-takers’ list with 11 scalps, which includes two four-wicket hauls.

Abbas Afridi has been the top performer for Pakistan, with nine wickets so far.

Both India and Pakistan are unbeaten in the tournament so far. The bowlers played a crucial role in India’s quarter-final victory over Australia with Kartik Tyagi and Akash Singh up picking four and three wickets each. Meanwhile, Mohammad Amir Khan and Mohammad Huraira did the star turn for Pakistan in their last-eight win over Afghanistan with three wickets and an unbeaten knock of 64. It will be a clash of pace attacks between the two sides and it will be fascinating to see which one comes out on top.