India Under-19 Vs New Zealand Under-19 LIVE SCORE (odi) 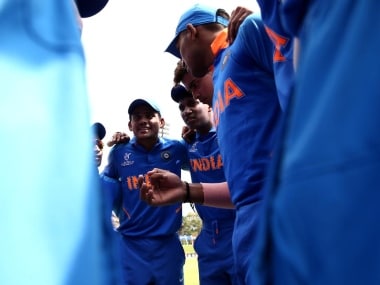 Highlights, India vs New Zealand, U19 World Cup 2020: India beat New Zealand by 44 runs, finish on top of Group A

India vs New Zealand, ICC U19 World Cup 2020, Live scores: Bishnoi finishes his spell. An excellent one for his nation. He picks up four wickets, giving away 30 runs. Three overs remaining in the match. Kiwis need 46 runs for victory with two wickets in hand.

That's all we have for tonight. Before rain intervened in the match which resulted in a 23-over game. the Kiwis made India to bat first and the openers put up a good show. India score 115 for no loss in their 23 overs and the Kiwis had to chase 192 for victory. They started the chase really well, with Rhys Mariu, Ollie White and Fergus Lellman scoring quick runs. But then, the Indian bowlers bounced back and picked important wicket to derail their opponents. Spinners Ravi Bishnoi took four wickets while Atharva Ankolekar grabbed three.

New Zealand captain Jesse Tashkoff: "We knew it was a pretty good batting wicket. All credit to them for putting such a total on the board. I think there's a lot of positives to take from our victory against Sri Lanka."

India captain Priyam Garg: "Very happy with today's performance and wish we continue the same in the next match as well. The guys handled the pressure reall well in this match."

Ravi Bishnoi is the man of the match

"It was a good surface to bowl. I kept bowling wicket to wicket and it helped. I would like to be like Shane Warne and Anil Kumble."

David Hancock hits to the mid-off and takes off but the fielder, Priyam Garg, smashes the stumps with his throw. David Hancock run out (Priyam Garg) 5(8).

India win the match by 44 runs and top finish their group on top. They will now play Australia in the quarter-final.

Bishnoi finishes his spell. An excellent one for his nation. He picks up four wickets, giving away 30 runs. Three overs remaining in the match. Kiwis need 46 runs for victory with two wickets in hand.

It's just a matter of time now. Tyagi continues his spell and gives away just six runs. All the balls targetted at the stumps, but some of them ended as full-tosses. No boundaries in the over.

What an over from Ravi Bishnoi. Two googlies in the over and both resulted in wickets. Wheeler-Greenall then takes a big risk of playing a big shot against Bishnoi and ends up losing his wicket. Great catch by Akash Singh. India need just two more wickets to win this one.

David Hancock hits to the mid-off and takes off but the fielder, Priyam Garg, smashes the stumps with his throw. David Hancock run out (Priyam Garg) 5(8).

India win the match by 44 runs and top finish their group on top. They will now play Australia in the quarter-final.

Bishnoi's tricks is bit too much for the Kiwis. Another googly as Dickson misses his shot and is out stumped. Dickson st Dhruv Jurel b Ravi Bishnoi 0(2)

Bishnoi is back into the attack and it's a wicket!

A wrong one as Ben Pomare walks down the track but misses the ball. Ben Pomare b Ravi Bishnoi 2(5).

Sushant Mishra back into the attack and he gets rid of Jesse Tashkoff!

Short-ball as Tashkoff tries the pull shot but hits it to the mid-on fielder. The skipper departs. Tashkoff c Priyam Garg b Sushant Mishra 8(12).

Targets the pads and traps Lidstone in front of the wickets. The umpire raises his finger in no time. Nick Lidstone lbw b Ankolekar 8(15)

Lellman drags the wide ball to the stumps and it's another big wicket for India. Fergus Lellman b Ankolekar 31(19).

Mariu tries to clear the long-off fielder but fails as Ankolekar gets the big wicket. Rhys Mariu c Kartik Tyagi b Ankolekar 42(31)

Ravi Bishnoi strikes to break the partnership. Bowls a slider as Oli White comes down the track but misses the shot. Easy stumping for Jurel. Ollie White st Dhruv Jurel b Ravi Bishnoi 14(12).

The covers are off and the game is on, 27 overs per side now. The target for New Zealand will be adjusted as per the DLS method. Openers Yashasvi Jaiswal and Divyaansh Saxena have provided India a solid start and they will be on strike to face the remaining six overs. Ten wickets in hand still, we reckon you'll see some aggressive batting.

Meanwhile, due to lightning and rain, the match has been stopped temporarily and the covers are on.

Huge hit and Jaiswal brings up his fifty in style. Bowled around the middle stump and he gets down on leg and plays a fierce slog sweep.

PITCH REPORT - There's not a lot of grass and the pitch really looks good. You want to be hitting the stumps as a bowler, change of pace is key and expect it to be a high-scoring game.

- Dominic Cork and JP Duminy about the pitch and conditions

New Zealand U-19 have won the toss against India U-19 and they have elected to bowl first.

Welcome to our blog of the final Group A tie of the ICC U-19 World Cup between India and New Zealand. Defending champions India are already through to the quater-finals and will hope to maintain their 100 percent record when they face the Kiwis.

India vs New Zealand, ICC U19 World Cup Group A match, Live Updates: India win the match by 44 runs and finish on top of their group. They will now play Australia in the quarter-finals.

Preview: Already through to the quarter-finals after two resounding wins on the trot, defending champions India will be keen to maintain their unbeaten run when they face New Zealand in the final Group A tie of the ICC U-19 World Cup on Friday.

India, who are atop their group with four points, had cruised to a 90-run victory over Sri Lanka in their opening encounter before outclassing debutants Japan by 10 wickets withe disciplined bowling effort. The Priyam Garg-led side will start as favourites against New Zealand on Friday.

New Zealand, on the other hand, were unlucky to share a point with Japan after their match was washed out in Potchefstroom last week. However, they managed to clinch a late winner against Sri Lanka and book a place in the last eight.

New Zealand, who had finished eighth on home soil in 2018, will be looking to follow a similar trajectory as their senior counterparts, who reached the finals of the men's World Cup last year, in this edition of the U-19 showpiece.

Having won the warm up matches against Zimbabwe and Afghanistan and the quadrangular series, the Indian team would not want to lose the rhythm at any cost.

In their previous outing, India leg-spinner Ravi Bishnoi (4/5) took four wickets while pacers Kartik Tyagi (3/10) and Akash Singh (2/11) shared five scalps among themselves to help the four-time champions bundle out Japan for 41, the joint second lowest total by a team in the U-19 World Cup and joint third lowest in the U-19 cricket history.

India then completed the formalities with openers Yashasvi Jaiswal and Kumar Kushagra remaining unbeaten on 29 and 13 respectively.

The bowling performance prompted skipper Garg to heap praise on his pace unit.

"Very happy with the performance. The spinners were good, but the lines and lengths could have been better from the pacers. There's no pressure as such. We want to do well, we take every game as it comes," Garg had said after the match.

On the batting front, Jaiswal (59), Garg (56) and wicketkeeper Dhruv Jurel (52 not out) impressed with half centuries against Sri Lanka while Tilak Varma (46) and Siddhesh Veer (44 not out) also provided useful contributions.

However, the Indian team is yet to be tested against a strong opposition.