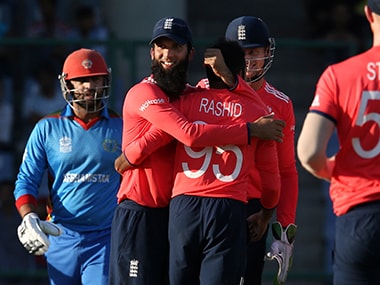 England will face New Zealand in the semi-finals. And the winner of India vs Australia will face West Indies. It was thriller tonight, when it shouldn't have been. Jos Buttler was the Man of the Match for his hard-hitting.

That's all from us on the night. Join us tomorrow for India vs Australia, the decider of 4th semi-finalist.

Maybe you'll start to believe me now , @englandcricket to win the #WT20

Now the India vs Australia game tomorrow will decide who will join New Zealand, West Indies and England in the semi-finals.

Mathews fought the good fight, he made 73 off 54, 3 fours and 5 sixes. But couldn't take them to the good end.

It's all over for Sri Lanka, excellent over from Stokes. England are through to the semi-finals of the World T20 , they join New Zealand and West Indies. Consequently it's also over for South Africa.

Another double! Mathews scoops it over Rashid at short fine leg, but the ball is collected before it reaches the rope. 11 off 3

Mathews, limping, hurting completes a double with some luck too.

DOT BALL! Full toss, but nothing comes off it

Mathews on strike, what an innings it has been from him. can he do it for Sri Lanka.

Sri Lanka win the toss and will bowl first. Dhashun Shanaka in the lineup, Angelo Mathews does not remember who he is replacing!

New Delhi: England will look to reach the World Twenty20 semi-finals with a hat-trick of wins as they face Sri Lanka in a crucial clash at the Ferozeshah Kotla here on Saturday.

England have four points from three matches in Group 1, with wins over South Africa and Afghanistan, albeit with hardships. On the other end, Sri Lanka have two points from two matches and with a win on Saturday they will look to keep their campaign alive. So far in this group, no team has reached the semi-finals. However, it could change later on Friday when the West Indies, with four points, take on South Africa, who have two points.

And the result of Friday's match will change the permutations in the race to the semi-finals and England and Sri Lanka, both will be feeling added pressure. However, both the teams need to focus on their performances as nothing short of victory will help either team’s bid to go through to the next round.

England might be feeling relieved after surviving a scare against Afghanistan. They relied on their lower order to bail the team out of trouble while batting before the bowlers put up a good show to defend the 142/7 total.

In their opener, even though their batting clicked, the bowlers had a tormenting day in trying to contain West Indian Chris Gayle. The batsmen repeated their act again in a successful chase against South Africa. However when the batsmen faltered against Afghanistan here, their bowlers were brilliant.

"We haven't had a match so far where all the three departments did well. It means our best is yet to come and when it (when all the departments do well in a match) happens, we will be a hard team to beat," England batsman Joe Root said at the pre-match press conference.

England clearly did not read the conditions anywhere near as accurately as needed in the match against Afghanistan, expecting a turner when the pitch at the Kotla was merely slow and low, with the ball skidding through.

"Being from England, you've got to work it out pretty quick and be quite smart," said Root. "You can make assumptions the day before the game, but it's about what you do when you're out there. We have to be clear how the pitch is going to play.

"Ultimately, it’s about playing the situation in front of you, reading the wicket, reading the score if you’re chasing, and making sure you’re working with your partner to whittle it down and take the game away from the opposition.”

England's opposition, Sri Lanka have flown a bit under the radar in this tournament despite being the defending champions, and the loss of pace spearhead Lasith Malinga to injury has largely lowered expectations.

But, if anything, their bowling attack had done a job. It will certainly be looking to use the slow bowlers -- turn or no turn -- to put some doubts in English minds. They will like to exploit England's batsmen's weaknesses against spinners, mainly through veteran left-armer Rangana Herath.

Apart from Herath, leg-spinner Jeffrey Vandersay has shown that he is capable up putting together a disciplined spell of bowling. And, as always, Tillakaratne Dilshan lurks in the shadows, his off-spin a serious option to throw England off their game, perhaps even early on.

“We had six days rest," said batsman Dinesh Chandimal. "Two of those days were total rest -- without training. It was for the players to concentrate on their own games. To watch videos of them batting well, and to analyse where they went wrong.

“In those days, we also made a lot of plans about how to challenge England. There will be a few small changes. Those changes will also be made to surprise them. We are hopeful we can give them a good game.”

However, Sri Lanka will have to solve their batting woes, especially the middle-order, as admitted by Chandimal. The form of Chamara Kapugedera has been a worry, while Milinda Siriwardana hasn't show the confidence.

If Dilshan and Angelo Mathews don't fire, it could be a problem for the islanders, who also have been struggling with the net run rate.