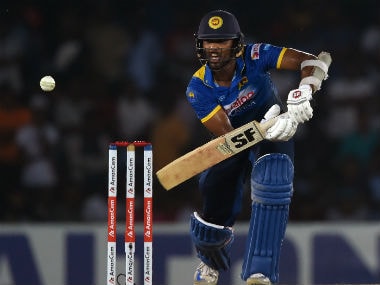 That's all we have today. Join us later in the day for the semi-final and final of the T10 League. Kerala Kings take on Maratha Arabians in the first semi-final and it's Pakhtoons versus Punjabi Legends in the second semi-final. That will be followed by the final. See you then. Till then, goodbye.

Perera to Anwar Ali. Single off the first ball. Over to Miller then. Two needed off five balls. Quicker delivery and inside edged to the boundary.

Miller gets a six. Big hit in front of square on the on-side. And goes on the off-side for consecutive sixes. Seven runs needed off seven balls now. Gets a full toss and dismissed by Miller through cover for a four. The Tigers are almost home.

Darren Sammy comes into bat. Shehan Jayasuriya with some spin. The third ball is wide on the leg stump and the ball runs away to the fence. Wide again.

OUT! Sammy gone. Caught at long-on. No mistake from Hasaranga in the deep. Sammy looks at the toe of his bat.

Anwar Ali comes in. Gets a juicy full toss and sends it over the ropes. The last ball heaved away towards long-on. 24 runs needed off 12 balls.

Kasun Madushanka continues and Charles goes 105 metres back. That's on the roof.

OUT! The next ball is a skier. Mistimed by Charles. Caught by Munaweera. Well-judged by him. Charles out for 36 off 15 balls.

David Miller walks in to the centre. Kohler not getting his timing right. The next ball is speared in. Miller digs it out for a single.

OUT! And Kohler falls. Bowled wide of the off stump. Kohler doesn't time it and holes out to long-off. 24 off 17 balls for Kohler.

Lahiru Madushanka into the attack now. Square drive for a single off the first ball by Charles. A single for Kohler and Charles tees off. Golf shot for six. Kohler gives the charge and Lahiru bowls it wide. Beats the batsman. Lahiru goes wide again. Single off the last ball. 51 needed off the last four overs.

Kasun Madushanka into the attack. Kohler gets a length ball and goes straight as an arrow. SIX! 90 metres back. Slower delivery next. An Alubond dot ball! Kohler swats one through the region in front of square leg for a boundary. Not a lot else in that over. The players take a strategic break at the end of that over.

Shehan Madushanka bowls the fourth over. Charles goes straight. Hit with tremendous power. Four. Madushanka bangs it in. Beats Charles's pull. Follows it up with a bouncer. Wide called. Then a swing and a miss. Powerplay overs done and dusted.

Some spin now. Rambukwella into the attack. Delport cuts the first ball of the next over, but finds the fielder.

OUT! Delport tries to go over mid-on, but is caught by Hasaranga. Tigers are one down

Johnson Charles comes in and clears mid-wicket easily. Starts off with a SIX. Charles goes again. That is hit straight into the lap of wide long-on, but such was the power in that shot, the fielder loses control and the ball goes out of his grasp and hits vthe ropes. The last ball is smashed over long-on for a six.

Perera to Anwar Ali. Single off the first ball. Over to Miller then. Two needed off five balls. Quicker delivery and inside edged to the boundary.

Maratha Arabians' Rilee Rossouw is Man of the Match for his whirlwind innings against the Punjabi Legends.

Coming up next is the playoff for the 5th/6th place. Bengal Tigers take on Team Sri Lanka Cricket. Two teams that have just not taken flight.

Zahoor Khan to bowl the last over. Brathwaite misses the first two balls. The batsmen try to steal a single and Ronchi run out as the 'keeper Kamran Akmal hits the stumps at the striker's end. Ronchi out for 56 off 31. Faheem Ashraf comes in. 29 needed off 4 balls. Wide. Ashraf drives. Brathwaite is almost at the other end. All he gets is one. Brathwaite needs to do an encore of the 2016 World T20 final to help his team qualify for the semis. Brathwaite edges a full toss and sends the ball past short third man. Four. They need a five to qualify. And Brathwaite takes an almighty swing. SIXXXX! Legends qualify under dramatic circumstances. YES, REMEMBER THE NAME!

Legends go down by 14 runs, but they are off to the semis.

Bopara to bowl the last over. Starts with a wide, but comes back well with a slower ball that took ages to arrive. And again! Van Der Merwe swings, but to no avail. Wide again. Van Der Merwe heaves one towards long-on. Slower delivery doing the trick. The ball went miles in the air, but didn't get the distance. Umar Akmal completes the catch in the deep. Van Der Merwe out. Bravo on strike, with the batsmen crossing over while that ball was in the air. Gets a couple of the fifth ball. A better throw cpould have had the batsmen in trouble. A slower delivery to end. A fine last over from the highly experienced Bopara. Just six runs from that over. The first 5 over of the Arabian innings went for 59 runs and the next 5 only for 51. But a very stiff target for the Punjabi Legends nevertheless.

Not much of a rain break. The rain has gone away. The players are out on the field.

Some drizzle again. The rain has got a bit heavier. The players are going off again. The covers are coming on. Play stopped after 2.2 overs. Maratha Arabians are 31/2.

Kerala Kings all-rounder Kieron Pollard wins the Man of the Match for his performance against Team Sri Lankan Cricket.

Toss: Maratha Arabians' stand-in skipper Imad Wasim spins the coin. Punjabi Legends captain Misbah-ul-Haq wins the toss and elects to bowl. In T10 cricket it is better to plan a chase, says Misbah. Arabians' regular skipper Virender Sehwag is out with back spasms.

Shehan Madushanka to bowl the penultimate over and is hammered for six off the first ball. And that's game, set and match for the Kerala Kings. Pollard hammered the bowlers to all parts. Unbeaten 40 off 12 balls for the West Indian. Walton played some attractive shots too.

The players make their way out of the ground as it begins to drizzle a bit.

Liam Dawson of the Pakhtoons wins the Man of the Match award for an all-round show against the Bengal Tigers.

Zahir Khan to bowl the last over. Dawson gets two sixes off the first two balls. 5 needed off 4 balls. This turns the game, doesn't it? The Pakhtoons are scampering for every run. A push and two runs taken. The match is slipping away from the Tigers. Single. Smith pulls the next ball and the scores are level. The fielders are being called in. The last ball is punched away by Dawson through the gap at point and that's the win for Pakhtoons. Pakhtoons win by 6 wickets. Sarfraz hits the stumps in disappointment. May get a call from the match referee for that. Having an inexperienced bowler for the last over may not have been a great strategy.

Toss: Pakhtoons captain Shahid Afridi spins the coin and calls correctly. Invites the Tigers to have a bat.

Pitch report: It's a pitch that is excellent for batting. The conditions are bright. Any target can be chased down. It is a beautiful surface. Win the toss and bat first should be the call.

Hello and welcome to the third day's action of the T10 Cricket League taking place at the Sharjah Cricket Stadium in UAE.

5/6th place playoff, Team Sri Lankan Cricket vs Bengal Tigers, T10 Cricket League: Perera to Anwar Ali. Single off the first ball. Over to Miller then. Two needed off five balls. Quicker delivery and inside edged to the boundary.

Preview: It's the third day for T10 Cricket League, and teams are all set to battle it out at the Sharjah Cricket Stadium. Saturday will see Shahid Afridi's Pakhtoons taking on Sarfraz Ahmed's Bengal Tigers. The next match is between Dinesh Chandimal's Team Sri Lanka Cricket and Kerala Kings, who are captained by Eoin Morgan. In the third match, Virender Sehwag's Maratha Arabians will face Punjabi Legends. Saturday's final match will be a playoff for the 5th/6th place.

Earlier, the highlights was Shahid Afridi's hat-trick that lit up the opening night of the T10 League, helping his Pakhtoons side beat the Virender Sehwag-led Maratha Arabians by 25 runs.

Rilee Rossouw played a blinder to help his team Maratha Arabians clinch a thriller against Team Sri Lanka Cricket. He remained unbeaten on 49 as Rossouw's two sixes in the last balls saw Arabians chasing down a huge total of 125.