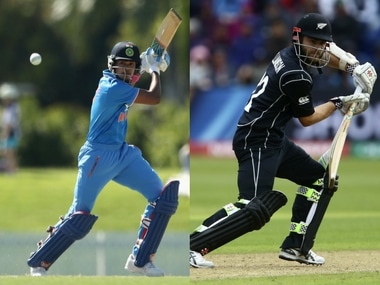 That brings us to the end of our coverage. Not an ideal start for New Zealand, they have to get back to the drawing board and resolve as many issues as possible before the second practice game, which is on 19th October. The first ODI is on 22nd October and will be played at the Wankhede Stadium. Do join us for the first match. For now, its good bye. Take care!

The players acknowledge each other after Shreyas Iyer and Co's win.

That’s it. President’s XI win by 30 runs in Mumbai. Another warm-up match on Thursday #INDvNZ pic.twitter.com/tlQtLRIn4U

New Zealand's last hope was pinned on the pair of Santner and Grandhomme. But as soon as Shreyas Iyer brought Jaydev Unadkat into the attack, the left arm pacer removed Santner and Trent Boult. The onus now is on Grandhomme. Can he take New Zealad home? Difficult to say, the required run rate is 10.75.

At one stage, the Kiwis were in the stage, but they have lost their way in the last four overs. Gurkeerat Singh had Tom Latham caught while, Prithvi Shaw, the 17-year old, bowled Adam Milne and Tim Southee. New Zealand need 72 off 42 balls.

Looking tough for the visitors.

Avesh Khan removes the dangerous Ross Taylor for 34. But Tom Latham is playing good. He went past the 50-run mark. The asking rate is now close to nine.

Drinks in Mumbai. 166-3 after 32 chasing 296 against Presidents Xl. Taylor and Latham at the crease. pic.twitter.com/AJb1pwB2ut

50 runs partnership up between Latham and Taylor. The required run-rate is slightly above seven so the Kiwis should look to up the ante.

Tom Latham is striking the ball good. He's scoring more than run a ball while Ross Taylor is steady. Kane Williamson was looking dangerous but Karn Sharma removed him for 47.

Dhawal Kulkarni draws first blood for IBP XI as he gets rid of Guptill for 22.

IBP XI lose a flurry of wickets in the last five overs but manage to set a challenging target of 296 while batting their full quota of overs out. Boult finishes with figures of 5/38

Boult removes both Karun Nair and Shivam Choudhary in the slog overs, with India seven-down. The left-arm pacer's tally in this game goes up to four.

Gurkeerat falls for 11 as Santner collects his second wicket, with India losing their fifth batsman.

Openers Rahul (68) and Shaw (66) are sent back by spinners Sodhi and Santner, as IBP XI lose two wickets while crossing the 150-run mark.

Rahul goes past the half-century mark himself! The opening partnership is worth 139 at the end of the 24th over, and the IBP XI seem headed for a total that should be in excess of 300. As many as eight options have been used by the Black Caps so far.

And Shaw crosses his half-century, hammering seven fours and a six to get to the milestone, bringing up the century partnership along the way! Rahul himself needs another nine runs to bring up his half-century.

Southee and Boult, having bowled four-over spells each, have given way to Adam Milne and Mitchell Santner in the attack, though the Indians are in control right now. The Rahul-Shaw opening stand is now worth 50.

JUST IN: The New Zealanders win the toss against the Indian Board President's XI (IBP XI), and captain Kane Williamson opts to bowl first!

Gearing up for some quality spin test, New Zealand will look to get into the groove when they lock horns with the Board President's XI in a warm-up game as a pre-cursor to their limited overs series against India.

The Kiwis led by Kane Williamson had a few practice sessions at the Cricket Club of India, the venue of the warm- up game ahead of their lung opener. Senior players including Williamson, Ross Taylor and Martin Guptill would like to get some runs under their belt before going into the series.

Board President's XI, on the other hand, is a relatively young side captained by Mumbai batsman Shreyas Iyer, who has been in good form for the India A team.

The bowlers will also go in with a similar approach and look to unsettle the Kiwis batters.

New Zealand coach Mike Henson will particularly look at his opening pair of Tom Latham and Guptill to give a descent start on a wicket expected to help the batsmen.

With the senior pacers not named in Board President's XI squad, the Kiwi batsmen will face Dhawal Kulkarni, Jaydev Unadkat, who relatively have a little experience at the international level.

The visiting batsmen will need to overcome the spin threat which will be posed by in-form Shahbaz Nadeem and rookie leggie Rahul Chhahar.

New Zealand skipper Kane Williamson had yesterday said that the practice games were important ahead of the ODI series.

"These two (practice) games coming up are important for us in our preparations. We hopefully hit the ground running in the first one-dayer," Williamson had said.

With wickets in India generally aiding the spinners, Mitchell Santner will be eager to get as many wickets in the game and be ready for the main battle.

The Black Caps will like to get some inputs from players like Colin Munro, Henry Nicholls, George Worker - all of whom have been in India for some time now, playing against the A side.

In the match, Board President's XI players will surely get an experience of playing an international team but for the Kiwis it will be all about adjusting to the conditions.

Meanwhile, it is raining in the maximum city for the past 10 days especially in the evenings. This could affect even the start of play if there is a wet outfield.

Additionally, the track is expected to have more juice due to the downpour.