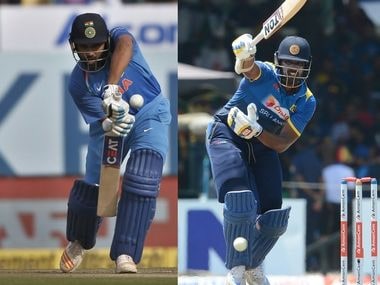 India haven't lost a single bilateral series in 2017. Let that sink in. Another series to go. Can they continue their rich vein of form in the T20s? Join us on 20 December to find out. Tell then, it is time to say good bye. Cheers!

Well played @BCCI and winning the series. SL had a good start but couldn’t stay in the game. Lessons to learn and more hard work.

Rohit Sharma, India captain: Terrific comeback after the first game in Dharamshala. We showed a lot of character. This has been the hallmark of this team, whenever we are put under the pressure we have comeback strongly. Very proud of the boys. First game was a bit testing as a captain, because we didn't have many runs on the board. Second game was good for me to settle into captain's role. Good to have such bowlers, whenever the ball is thrown to them, they give wickets. Batting of Shreyas Iyer was positive, he showed a lot of intent. From the outside it didn't look like he has played only a couple of games. Whenever the spin-twins have played together they have played well, they have brought us back into the game. This time has shown again and again that whenever we are under the pressure we have done well. Ready for the overseas run now. Excited to lead the young side for the upcoming T20Is.

Shikhar Dhawan, Man of the Series (168 runs at an average of 84): I feel I am batting at my best and that is why my consistency has gone up. (On what has he worked on) A bit on technique and on the guard. Once you keep scoring, it becomes easier to handle situation and that is why my success rate has gone up. Whenever I score fifty, I go for a hundred and the conversion rate is good as well.

Kuldeep Yadav, Man of the Match: We are were looking wickets in the middle over and I got two wickets in an over that changed the momentum for us. Wicket was turning and working on my length. When I wasn't getting games, I was working my fitness and my bowling.

Kuldeep Yadav is awarded the Man of the Match

Sri Lanka captain, Thisara Perera: It is really disappointing for us. We played well in the first game, and it was a good chance to beat India in India, but our bowlers didn't execute the plans well in the last couple of games. We got good start today, but the middle order didn't capitalise and so we couldn't put enough runs on the board.

What a season this has been for India. They have pocketed each of the six odi bilateral series they have played this year. That's some form.

Dhawan wins it for India but the crowd is deliriously chanting for Dhoni. The man does have a following here.

Shikhar Dhawan becomes the second batsman to score 1000-plus runs against Sri Lanka in a calendar year in ODIs after Virat Kohli (also in 2017).

India win the Vizag ODI by eight wickets. Karthik ends with a boundary to the cover fence.

CENTURY! And Dhawan gets there with a boundary behind square. A fine knock from the southpaw. Accelerated well in the end to get to the three-figure mark.

OUT! Shreyas will be kicking himself. He had a great opportunity to score a century but is departing for 65. He tries to slam one over mid on but miscues and Lakmal pouches it safely.  Shreyas Iyer c Lakmal b Perera 65(63)

FIFTY! 24th 50 for Shikhar Dhawan. Has dropped anchor and let Shreyas do the hitting but still his strike rate is over 100. He is in great form. Gets there with a huge six over midwicket.

OUT! Rohit falls against a googly. It was a common scenario during the IPL. And here too Dananjaya dished out a googly and Rohit missed it completely to hear his stumps get rattled.  Rohit b Dananjaya 7(14)

ALL OUT! Gunaratne the last man to be dismissed. Looked to run it down to third man, instead he gets an edge and Dhoni pouches a smart catch behind the stumps. Bhuvneshwar Kumar gets his first wicket.

OUT! Bowled round his legs! Dananjaya, like many other of his mates, brings an end to his innings courtesy poor shot selection. Goes for the sweep off a full ball by the chinaman.

OUT! Pathirana looks for the big heave to long on, doesn't time it at all, Chahal completes a good catch running backwards and sideways from mid on

OUT! Chahal strikes again. Poor from Perera. The ball was pitched on off stump and was bound to come in, Perera move towards the line of the ball only to cramp himself for room when the ball spun in. He reviews the on-field call but there was nothing on snicko and the ball tracking suggests it would have clipped the bails, the decision stays with the umpire's call as the Lankan captain has to walk back.

OUT! What a delivery! Beaten all ends up! Leg-spinner's dream ball! Got the drift darting into Mathews, pitched touch outside leg stump and squared the batsman up, with the ball crashing into the middle and off stump.

OUT! Samarawickrama went for the inside out shot over covers with the spin, wasn't quite to the pitch off the ball as he finds Shikhar Dhawan in the deep. Much needed break for India and its the leggie Chahal who picked the wicket.

DROPPED! Samarawickrama used his feet to whip it away but couldn't keep it down. Karthik the fielder at mid wicket, stretched himself to the fullest but couldn't hold on to a tough chance.

OUT! Gunathilaka's attacking approach doesn't come off. Shimmies down the track and looks to go over the top of the mid on fielder, doesn't get the elevation he would have liked as Rohit takes a simple catch.

TOSS: India win the toss for the first time this series, and captain Rohit Sharma has elected to bowl first!

Pitch report: I am licking my lips, this is such a good batting wicket. It's quite hard and looks beautiful to bat on. You have to bat well though. The bowlers will get good pace and bounce with the new ball. It should get easier to bat later on, Sunil Gavaskar tells Russel Arnold after inspecting the 22 yards.

India vs Sri Lanka, 3rd ODI at Visakhapatnam: India win the Vizag ODI by eight wickets. Karthik ends with a boundary to the cover fence.

Preview: Rohit Sharma will aim to maintain his superb batting form and win his first series as captain when India take on Sri Lanka in the third and final One-Day International (ODI) at the Dr YS Rajasekhara Reddy ACA-VDCA Cricket Stadium on Sunday.

After a thumping seven-wicket loss against Sri Lanka in the first match, Rohit created history by becoming the first batsman to score a third double century in ODIs as India bounced to back to win by 141 runs and level the series at 1-1.

If Sri Lanka do pull of a win on Sunday, it will be their first bilateral ODI series win in India.

India on the other hand, will aim to keep up their superb form at home that has seen them win every series since the defeat to South Africa in October 2015. If India's past record at this venue is anything to go by, they have an excellent chance to keep their unbeaten run going.

The hosts have lost only one of the seven matches they have played at this ground and a generally unimpressive Sri Lanka will have to be at the top their game to get past the Indians.

Placed second in the ODI rankings, India will look to Rohit to lead from the front and give the side a flying start. Along side the skipper all eyes will be on fellow opener Shikhar Dhawan, who scored a brilliant half-century in the previous match to dominate the innings from the beginning.

One-down batsman Shreyas Iyer who scored his maiden ODI half-century in the previous match will only add strength to the formidable Indian batting line-up along with Mahendra Singh Dhoni, Hardik Pandya, Dinesh Karthik and Manish Pandey .

The bowling will however depend on new ball bowlers Bhuvneshwar Kumar and Jasprit Bumrah. Wrist spinner Yuzvendra Chahal who bagged a three-wicket haul in the last match will be the key in the middle overs to provide crucial breaks and stem the flow of runs.

For Sri Lanka, captain Thisara Perera will look to re-work his team's strategies to help the visitors return to winning ways.

Perera will also be a vital player in the bowling department along side Angelo Mathews, Suranga Lakmal and Akila Dananjaya who have failed to trick the Indian batsmen and pick up key wickets.

For the eighth ranked ODI side, the batting will heavily rely on experienced campaigners Upul Tharanga and Angelo Mathews. Sri Lanka will also hope Danushka Gunathilaka, Niroshan Dickwella and Asela Gunaratne to get amongst runs.