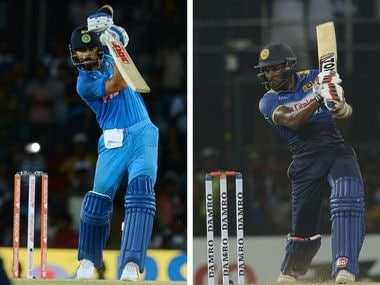 That's it from us in our coverage of the third ODI between India and Sri Lanka, with the visitors wriggling out of yet another tight situation, and making the 218-run chase look easy to complete a six-wicket win, and clinching the five-match series 3-0. The remaining matches have now been reduced to dead rubbers, though it allows Kohli and Shastri room to experiment with their squad.

We'll return on Thursday for our coverage of the fourth one-dayer. For now, it is time for me, Amit, to sign off on behalf of my colleague Vaibhav, as well as our contributors Chetan Narula and Umang Pabari. Goodnight!

Virat Kohli (Indian captain): Small targets are always tricky. If it happens to you two-three times, it isn't an issue. People make issues out of it. Today it wasn't a collapse to be honest. Couple of wickets, you wouldn't get wickets on eight out of ten times. Couple of batsmen applied themselves really well, especially Rohit. Bumrah's got 11 wickets in 3 games, he's bowled really really well. He's among our top short format bowlers. (On making changes to the team in the remainder of the series) Yes definitely. We'll look to give some guys a go and see where there game stands. We can afford to make some changes now.

Chamara Kapugedera (Sri Lankan captain): Thought it was a good wicket. Like the last game it will grip a bit. Things didn't go to our plans. We have to go back to our drawing board and see what we can do. 260-275 would have been a challenging score. (On captaincy) I enjoyed it. It was pressure, it was first time.

Jasprit Bumrah (MoM): It's always good when you get a break, so you can work on your strengths, spend some time with your family. Was a different wicket this time, there was seam movement. (On being the first Indian pacer with a five-wicket haul since 2014) I didn't know that.

Jasprit Bumrah wins the Man of the Match award for his figures of 5/27!

I feel like l just fell in to a deep dark hole... so sad.. Embarrassed !! Apologies to everyone if it means anything at all !!

Dhoni guides a full toss from Vishwa Fernando towards the deep midwicket region, collecting the winning single as the ball lands safely beyond the fielders' reach. The resumption of play was a mere formality, with Rohit Sharma and MS Dhoni having sealed the game in their favour with a mammoth unbeaten fifth-wicket stand. In the end, they needed seven more deliveries to score the remaining eight runs.

Jasprit Bumrah wins the Man of the Match award for his figures of 5/27!

INDIA WIN BY SIX WICKETS! Dhoni guides a full-toss from Fernando towards deep midwicket region after a top-edge, and once again collects the winning run, as India clinch the five-match series 3-0!

150-run stand completed between Dhoni and Rohit, with the former bringing up the milestone with a single in the first delivery after the resumption of play. India 211/4

FOUR! Rohit sweeps the second ball of the 44th over towards the square-leg fence! India past the 200-run mark now!

FIFTY for MS Dhoni — his 65th in ODIs — as he gets to his milestone in 74 deliveries, having hit four boundaries! Gets there with a cracking boundary towards sweeper point. India 196/4

SIX! Second big hit of the Indian innings, as Rohit pulls a back-of-length delivery from Fernando towards long-leg, clearing the fence comfortably in a flat hit! Brings up century stand with Dhoni in the process! India 166/4

CENTURY FOR ROHIT SHARMA! What an innings this has been from the Hitman so far! Collects a single at the end of the 35th over, getting to the milestone for the first time on Sri Lankan soil. Takes 118 deliveries to bring up the ton.

FIFTY partnership up between Rohit and Dhoni! The two batsmen have attacked the spinners freely, and have taken the attack to Dananjaya and Siriwardana, while getting the visitors back on their feet! Dhoni collects a single in the third ball of the 25th over, with the milestone coming up on 56 balls. India 111/4

FIFTY for Rohit Sharma, and he gets to the milestone with back-to-back boundaries in the 19th over! Gets to his 33rd ODI fifty in 64 deliveries, guiding a back-of-length delivery towards long-leg! India 81/4

OUT! Tossed up, full and Jadhav goes for the sweep. Misses. And is trapped right in front. No problems for the umpire to raise the finger. Jadhav doesn't deliberate for a review. Dananjaya bursts into the 'aeroplane' celebration. Jadhav 0 (2) lbw Dananjaya

MS Dhoni walks out to bat

OUT! Dananjaya takes just five deliveries to get his first scalp, as Rahul smacks a wrong un from the mystery spinner straight into the hands of Thirimanne at deep midwicket. Looks like the Indians are yet to decipher Dananjaya. India 61/3

OUT! Kohli flicks a rising delivery along the leg stump, and ends up guiding it in the direction of the long-leg fielder. Chameera, stationed in the deep, takes a fine catch. Wicket for Fernando, as the Lankans are in firm control of the proceedings right now! IND 19/2

OUT! Big mix-up between the batsmen after a short ball from Bhuvneshwar that is called a wide, and Chameera ends up falling well short of the crease at the non-striker's end as Bhuvneshwar breaks the stumps. SL 210/9

OUT! And Bumrah collects his maiden five-wicket haul in international cricket, as he castles a well-settled Siriwardana! SL 201/8

OUT! Another four-wicket haul for Bumrah, as he castles Dananjaya with a length delivery! The tailender was looking to play across the line, and missed the ball completely before it crashed between middle and off. SL 191/7

BOWLED EM! Axar gets a faint inside-edge off skipper Kapugedera's bat that knocks the leg-stump over! SL 181/6

OUT! Comeback man Thirimanne falls 20 short of what would have been a fine century, as he flicks a full delivery from Bumrah straight to the outstretched hands of Kedar Jadhav at midwicket! SL 158/5

OUT! Angelo Mathews is trapped plumb leg-before while attempting a reverse-sweep off a delivery that was pitched between middle and off. Ends up wasting Sri Lanka's review before heading back to the pavilion. SL 138/4

FIFTY for Lahiru Thirimanne! What a comeback this has been for the man who last played an ODI in national colours back in January 2016! Collects a single at the start of the 30th over to get to the milestone in 69 deliveries! SL 111/3

OUT! Chandimal holes out to deep square-leg while looking to guide a rising delivery along his leg-stump over the fence! Wasn't in control of his stroke on that occasion! SL 100/3

Fifty-partnership completed between Chandimal and Thirimanne, with the former collecting a quick single to bring up the milestone in 74 deliveries! SL 78/2

OUT! Brilliant catch by Rohit Sharma at second slip, after a thick outside edge by Kusal Mendis off Bumrah's bowling! Sri Lanka 28/2

OUT! Just a couple of deliveries after Dickwella successfully reverses an lbw decision against him, he has to head back to the pavilion after getting trapped plumb lbw. Bumrah fires another lethal yorker, and this time gets his line right. Umpire Wilson has a wry smile on his face as he gets his decision reversed for the second time this over. Sri Lanka 18/1

Two changes in the Sri Lankan lineup — Thirimanne and Chandimal coming in place of the injured Gunathilaka and the suspended Tharanga respectively.

Pitch Report:"Nothing much has changed from the last ODI, nice and firm surface except a little tinge of grass on one side of the wicket. It will be a good toss to lose," says Zaheer Khan who is by the pitch side. Russel Arnold agrees.

INDIA WIN BY SIX WICKETS! Dhoni guides a full-toss from Fernando towards deep midwicket region after a top-edge, and once again collects the winning run, as India clinch the five-match series 3-0!

3rd ODI preview: Having already secured a 2-0 lead, India will look to seal the series against Sri Lanka in the third of the five-match ODI series at the Pallekele International Cricket Stadium in Pallekele on Sunday.

India took a 2-0 lead in the series after pulling off a three-wicket victory from the jaws of defeat in the last match. The visitors had suffered a batting collapse, losing seven wickets in the space of 22 runs to be reduced to 131/7 at one stage thanks to excellent bowling by Sri Lanka off-spinner Akila Dananjaya, who returned a six-wicket haul.

But former captain Mahendra Singh Dhoni (45 not out) and tailender Bhuvneshwar Kumar (53 not out) put together 100-run partnership to help the visitors chase down the target.

Openers Rohit Sharma, Shikhar Dhawan had put India off to a fine start with a stand of 109 runs and the visitors will bank them and Dhoni to continue their fine form.

The Indians will also hope that batsmen KL Rahul, Kedar Jadhav and skipper Virat Kohli gets back to form after all three failed to reach double figures in the last match.

In the bowling department, pacers Jasprit Bumrah and Bhuvneshwar Kumar, alongside spinners Yuzvendra Chahal and Axar Patel, will look to put breaks on the Sri Lankan batting which has failed to pose a threat in the previous matches.

Sri Lanka will hope batsmen Dinesh Chandimal and Lahiru Thirimanne, who have been called up for the remaining ODIs as a replacement for Danushka Gunathilaka and captain Upul Tharanga bring some positives into the side.

Stand-in captain Chamara Kapugedera along with Niroshan Dickwella and Milinda Siriwardana will look to play a key role in the batting department.

Among the bowlers, Dananjaya will look to continue his fine form.

The 29-year-old, an explosive batsman and a seam bowler, will become Sri Lanka's sixth captain in less than four years if he gets the job.