So that is it from us today. It was a frustrating day just like Day 1. Let's hope the train stays away tomorrow and we get a full day's action. Do join us on Day 3. For now, it's time to say Ta-ta.

If yesterday belonged to Lakmal, today it was Shanaka's day. The Sri Lankan medium pacer bagged the wickets of Rahane and Ashwin, pushing the hosts further on the backfoot.

Solid as ever, Pujara still keeps the hopes of an Indian recovery alive with the very able Saha for company.

That's all folks. No more play possible due to the rains here in Kolkata. #TeamIndia 74/5 at the end of Day 2 #INDvSL pic.twitter.com/DvDaQQMyYt

There we have it. It was highly unlikely after the heavy rains in the afternoon for the ground to be game ready.

In fact, even if it doesn't rain from this moment onwards, it cannot be said with assurance that the match will begin on time tomorrow. 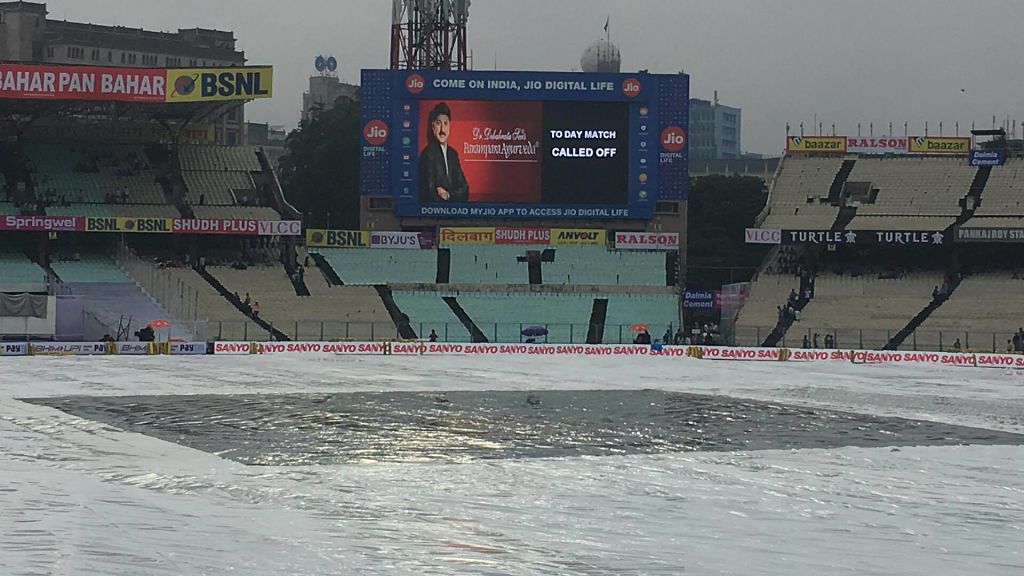 What a pity. Was an engrossing period of play asking a lot of questions of the batsmen. Hopefully, tomorrow morning.....

Day 2's play has been called off due to incessant rains. Only 21 overs were possible today. India as well as Sri Lanka must be left frustrated. Just when Pujara was getting into his groove, it started raining. He will have to go through the process of getting set once again tomorrow.

The super soppers are back on the covered ground, while it continues rain.

A few avid fans gather around the railing, shouting Virat Kohli's name and have been crying their voices hoarse. They are probably celebrating getting a wave or perhaps making eye contact with Kohli. With no cricket available at the moment, all fans want is just one teeny-tiny glimpse.

The rain has got heavier. Incessant rainfall has forced spectators who had been sitting under their umbrellas, to move out from their seats and take cover under the roof. 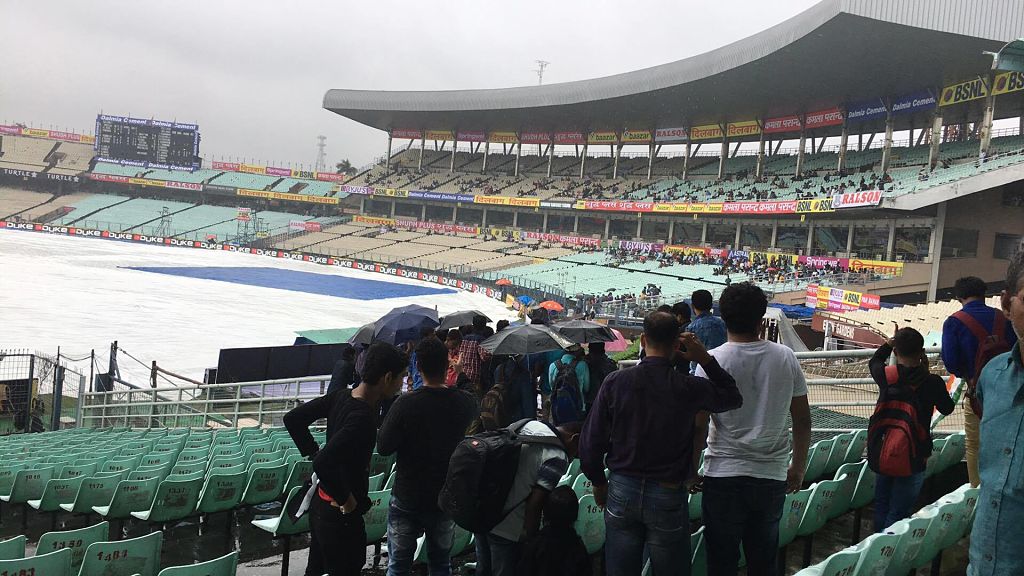 Day 2's play has been called off due to incessant rains. Only 21 overs were possible today. India as well as Sri Lanka must be left frustrated. Just when Pujara was getting into his groove, it started raining. He will have to go through the process of getting set once again tomorrow.

Uh-oh, rain halts play. it has started raining steadily and the umpires have decided to stop the play. The groundsmen rush towards the centre. Covers are back on.

OUT! 50/5! Ashwin has throwed his wicket away. He looked to slice a length ball but found the point fielder. India in deep trouble now. Shanaka has his second.

OUT! Edged and taken! Wrong shot selection and Rahane departs. Shanaka collects his first, It was an innocuous delivery way outside off, Rahane tries to drive it away from his body and nicks it to Dickwella. The umpire raises his finger and Rahane starts to walk, doesn't even think about a review. Sri Lanka have got the wicket they wanted.

India vs Sri Lanka, 1st Test, Day 2 in Kolkata: Day 2's play has been called off due to incessant rains. Only 21 overs were possible today. India, as well as Sri Lanka, must be left frustrated. Just when Pujara was getting into his groove, it started raining. He will have to go through the process of getting set once again tomorrow.

Day 1 report: Pacer Suranga Lakmal took three wickets to shave off India's top order and reduce them to 17/3 at stumps on a heavily rain-truncated opening day of the Test at the Eden Gardens on Thursday.

Play was stopped for three and a half hours after light drizzle, coupled with the wet outfield, forced covers to remain on the field throughout the morning. After a delayed toss, the proceedings had to be halted thrice due to bad light. Of the 11.5 overs bowled over 60 minutes of play that was possible, the tourists had the hosts on the mat from the word go. At stumps, which was called early due to bad light, India were reeling at 17/3.

Lakmal (3/0) accounted for opener Lokesh Rahul (0) on the very first delivery, also taking the wickets of Shikhar Dhawan (8 off 11; 1x4) and captain Virat Kohli (0 off 11) in a spell of devastating swing bowling courtesy the seam-friendly wicket.

Rahul's golden duck ended his streak of seven consecutive Test fifties. A seaming delivery squared on the Karnataka right-hander inside the crease, forcing Rahul to edge the delivery which had extra bounce away from his body to wicketkeeper Niroshan Dickwella.

At the other end, Dhawan dragged the ball onto his stumps the only time he was brought to his front foot by Lakmal.

Pujara got his first runs after 21 balls, pushing at a delivery short of a good length which went for a four towards the third man boundary.

The conditions were tough to bat even for the in-form and technically sound Saurashtra batsman. He was searching for the ball which nipped back off the deck rather late.

In the final session, Pujara, who came into the Test scoring a double ton against Jharkhand and 182 versus Gujarat in the Ranji Trophy, was the only batsman who looked to be settling down on a wicket which had a lot of zip.

To a Lahiru Gamage half-volley, Pujara played a classy drive past mid-off before the right-arm fast bowler got back with a gem of a delivery in the next ball that moved in at the batsman.

However, he witnessed his captain Kohli depart after an 11-ball stay, falling plumb to a superb Lakmal delivery which held its line as Kohli played for the outswing.