South Africa Vs India At The Wanderers Stadium, Johannesburg, 24 January, 2018 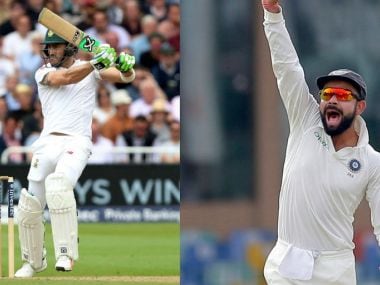 That brings us to the end of today's coverage. Hope you enjoyed it as much as we did to bring it to you. Join us tomorrow at 1.00 pm for Day 2 proceedings. Until next time, it's time to say good bye.

End of day 1. India know what to do and in four pacers they have the wherewithal to do it. What they don't have are the runs. Another 30-40 and South Africa would have been under the pump. Right now, they will be elated with the first day's work. Long road ahead for India to make it 2-1 from here, atleast at stumps today.

Bhuvneshwar Kumar's 30-run cameo towards the end of the Indian innings certainly looks a handful now that they have removed Aiden Markram early. The pitch certainly isn't an easy one to bat on, and the Indian pacers certainly have bowled with fire in the six overs that they got to bowl before stumps on Day 1. Let's see how they fare on the following day — negating the ABD-factor and grabbing hold of every opportunity that comes along their way will be crucial for them to grab a first innings lead.

End of day 1. India know what to do and in four pacers they have the wherewithal to do it. What they don't have are the runs. Another 30-40 and South Africa would have been under the pump. Right now, they will be elated with the first day's work. Long road ahead for India to make it 2-1 from here, atleast at stumps today.

Lovely shape and movement from Kumar and India draw first blood. Markram gone... You expect this from Bhuvi... India need more of the same!

Bumrah bowls what will be the last over of the opening day, with Rabada surviving six deliveries as South Africa reach 6/1 at STUMPS on the opening day of the third and final Test. Elgar, standing at the non-striker's end, took his gloves off well before the last delivery was bowled, not expecting Rabada to set off for a single whatsoever.

Bhuvneshwar gets the second delivery to straighten along the fourth stump line while kicking up higher than usual, making it near unplayable for Elgar. The southpaw opener struggles to adjust to the line of Bhuvneshwar's deliveries, and would be happy to stay put at his crease at the end of the over. Second maiden for Bhuvneshwar.

Bumrah continues from the other end, with the South Africans in a bit of a spot right now. Elgar gets hit on his elbow off the third delivery, and walks away from the crease in pain, needing some medical attention. After taking a few minutes to recover, Elgar punches the ball down the ground for a couple of runs. Guides the next one towards fine-leg for a single. Three off the over.

Bhuvneshwar doesn't take too long to get the first wicket, with Markram getting an outside edge while trying to fend a back-of-length delivery that angles away from his bat. The Proteas send Rabada as the nightwatchman, with Kohli fielding four slips and a gully. Wicket-maiden for Bhuvneshwar, who seems to be breathing fire right now.

OUT! Bhuvneshwar snares one early! Angles one away from Markram after pitching it short of length, with the right-handed opener nicking it to Patel behind the stumps. SA 3/1

OUT! The Indian innings finally comes to an end, with Bhuvneshwar getting a top-edge off a pull that lobs the ball over towards mid-on, where Phehlukwayo collects after a slide! IND 187 all out.

OUT! Wicket number two for Kagiso Rabada! Ishant gets a bottom edge that flies in the direction of du Plessis at second slip. The SA skipper lunges forward to collect the catch safely. IND 166/9

OUT! Easy a dismissal as it can get, as Shami lobs the ball up in the air off the toe-end of his bat to get caught by Rabada at mid off. Second wicket for Morkel! IND 163/8

OUT! Pandya has thrown his wicket away! Attempts a front-foot pull off a short ball from Phehlukwayo, getting a thick edge as a result. De Kock runs back, and collects the catch near the circle. IND 144/7

OUT! Parthiv walks back to the crease not long after Pujara's departure, getting a top-edge off a short ball from the lanky pacer that results in a safe catch for de Kock. The Indian keeper-batsman never looked settled in his 22-ball stay at the crease. IND 144/6

OUT! Pujara fails to build on after reaching his fifty, getting an audible edge off a length ball from Phehlukwayo! First wicket for the seamer playing his first Test in the series. IND 144/5

FIFTY for Cheteshwar Pujara, his 17th in Tests! He has had to toil for 173 deliveries and 255 minutes, facing a fearsome South African pace quartet, and has been exceptionally disciplined in his approach today to keep the Indian innings together! Gets to the milestone with a double off the 61st over. IND 143/4

OUT! Rahane is trapped lbw by Morkel, as his stay at the crease in his first outing of the tour comes to an end. The Mumbai batsman tries reviewing the decision after Morkel's successful appeal, but the ball is shown to be clipping leg, which results in the on-field umpire's decision being withheld. IND 113/4

OUT! There's no dropping him this time, as Kohli edges a fullish delivery from Ngidi straight to ABD in the slips! AB himself wears a startled expression after completing the dismissal. Ngidi pitched this one up, inviting a drive, and let the seam do enough to get the edge. Young Lungi's parents, watching their son live for the first time, are celebrating in the stands! IND 97/3

FIFTY for Virat Kohli, and what a way for the Indian to bring up the milestone for the 16th time in Tests! Pulls a back-of-length delivery from KG towards the square-leg fence! 101 deliveries taken by Kohli to get to the milestone today, with his luck also shining bright in the form of two dropped chances. IND 94/2

FOUR! Kohli pats a back-of-length delivery from Morkel wide of third slip, collecting his fifth boundary in the process. The Indian skipper did well to stifle the bounce on the occasion. And that brings up the fifty-stand for the third wicket! IND 63/2

OUT! Rabada doesn't take long to collect a wicket, removing Vijay in just his fourth delivery! Full delivery that moves away from Vijay, with the latter poking at it and getting a thick edge that travels to de Kock. IND 13/2

OUT! Rahul's poor run in the ongoing tour continues, and Philander strikes straightaway in his 50th Test! Angles this one into the batsman and waist height, getting an inside-edge that brushes past his hip, before settling into de Kock's gloves. IND 7/1

Just one change: Phehlukwayo comes in place of Maharaj.

Two changes: Rahane and Bhuvneshwar come in place of Rohit and Ashwin.

India vs South Africa, 3rd Test, Day 1 at Johannesburg, latest update: Bumrah bowls what will be the last over of the opening day, with Rabada surviving six deliveries as South Africa reach 6/1 at STUMPS on the opening day of the third and final Test. Elgar, standing at the non-striker's end, took his gloves off well before the last delivery was bowled, not expecting Rabada to set off for a single whatsoever.

Meanwhile, Kohli's not standing in the slips today — instead he's decided to relocate himself to mid off. Wonder if we'll get to hear his running commentary from that position or not.

Preview: India will aim to avoid an embarrassing series whitewash and salvage some pride when they meet a confident South Africa in the third and final Test match which starts at the Wanderers Stadium here on Wednesday. In the first two Test matches, India were outplayed in every department of the game. Skipper Virat Kohli also agreed that their opponents were way better.

But in the upcoming match, India will like to turn the tables and like to finish the series on a positive note.

However, it will not be an easy job for the Indians. With the conditions and pitch favouring the hosts, the visitors may find it tough to survive the full five days.

India could witness an archetypal South African wicket – hard and dry with plenty of bounce – which often provides lots of seam movement up front.

Spinners could also play an important role on the fourth and fifth days, so the inclusion of a tweaker could be helpful in the second innings.

In the batting department, apart from Kohli, all the other batsmen have totally failed to step up to the occasion.

Some of them are guilty of playing reckless shots – which would have worked on a slow pitch – in the first two Tests and coming into the third game, they will have got a measure of the task ahead.

The Indian team is full of stroke-makers like Shikhar Dhawan, Virat Kohli, Rohit Sharma and Hardik Pandya. Their attitude of dominating the bowlers with a flurry of strokes will not work in the third match.

Instead, they must harness the art of controlling the South African pace quartet by curtailing their habit of going after each and every delivery.

Calls for the inclusion of Ajinkya Rahane, known for his quiet approach, instead of fellow Mumbaikar Rohit Sharma have grown over the last few days.

It will not be a surprise if either Lokesh Rahul or Rohit sit out, while Parthiv Patel may find himself in the openers' slot.

On the other hand, South Africa will depend upon Dean Elgar, Hashim Amla, AB de Villiers and Faf du Plessis to score the bulk of their runs.

Rookie pacers Lungi Ngidi, who was the man of the Match in the last game will be crucial once again along with Vernon Philander, Morne Morkel and Kagiso Rabada. Keshav Maharaj will be the lone spinner for the hosts and may play a crucial role in the second innings.