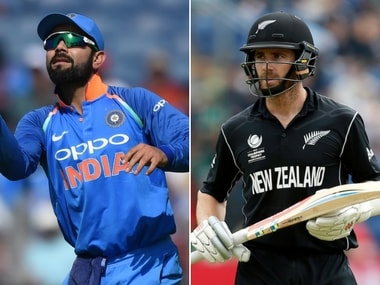 So, that brings us to an end of today's coverage. New Zealand pushed India against the wall till the very end but just faltered in the last few overs. They shouldn't be too disappointed with themselves. The Indian cricket team, on the other side, would be proud of the way they bounced back after the Mumbai loss. Three-match series are fun, eh? We certainly are going to see a lot of those in the future.

Anyways, New Zealand's tour is not over yet. The Kiwis will be playing three T20Is; the first of which will be played on 1st November in Delhi. Do join us for that game. For now, it's time to say good bye. Take care. Good night!

Virat Kohli, India captain and also the Man of the Series: Credit to New Zealand, they fought hard in this series and forced us to play our best cricket. Credit to the skill and character that they possess. You've to tell yourself that the bowler knows best because he too wants to win the game When there is dew on the grounds, even 22 fielders seem less, glad that the boys pulled it off. Well, to be fair on them the batting eased out it. 350+ was our aim but the pitch slowed out and the scuffed up ball made it difficult. The aim is always to win games and win the series and in that course you end up doing something personally it feels good acts as an incentive to do well. Very happy we could get another one in the bag, and move forward to the T20s. Little bit of better feeling with you doing well in team's win. These things are very hard to ignore when you're seeing it on the TV and the aim is to do well for the team.

Man of the Match, Rohit Sharma: Feels good when your team wins and you contribute in the win. I am happy with the way we played. New Zealand were very competitive, and it wasn't easy to come and win. We had to be at our best to win the game. I thought today was a perfect game. I was watching the pre-match analysis where they said my head was falling off, so I worked slightly on it. That helped. My head was falling a bit, and wasn't coming into the line of the ball.  Every hundred is special, I was just trying to do certain things. But what I was working on came off well. (Assistant coach) Sanjay Bangar helped my work on some of these things, and that's when results are more pleasing and that's why I was happy.

A fantastic game of cricket. The match went all the way but the Indian pacers finished the job for their team. Probably this is the last time Kanpur enjoyed an International match and the Indian cricket team made it worth remembering.

Kane Williamson, New Zealand captain: Fantastic series and it was played in the right spirit too. Credit to Virat and his team they were the better side 'JUST'. Lot of promising signs for us but we need to do really well to beat these guys. Tom Latham batted with such clarity in his mind, it was great to watch. Bowlers stuck it out as well, not an easy place for seam bowlers. You look back at little moments but as I said India played better cricket. Mitchell Santner is not bad (When asked for another spinner in the side)

Never underestimate the demons in the mind in a close game. India were the calmer side, New Zealand probably more tense

This is the seventh consecutive bilateral ODI series win for India which is a record for Indian cricket team.

‘It was a great series, but unfortunately we couldn’t get across the line’ - Tom Latham #indvnz pic.twitter.com/98O1rTjNhf

This is also the seventh consecutive bilateral ODI series win for Virat Kohli which is also the most for an Indian captain.

India have prevailed! Win by 6 runs and take the series 2-1.

OUT! High full toss but just under the waist. Santner cannot hit the screws out off it, ends up holding out to Dhawan at deep mid wicket, who takes a good catch and with that you would say India have it in their bag.

OUT! De Grandhomme misses the ball that was right in the blockhole he didn't connect it well, Dhoni passes it to the bowler Bumrah who hits the stumps to bring an end to Latham's innings. What a sad, sad end!

OUT! Bowled! Exactly what India needed. Yorker, on the leg stump to end Nicholls' cameo!

FIFTY! What a player, Latham has become. Mind you he started his career as an opener and now countering the spin in the middle oreder, helping NZ chase down totals. Still he has got some work to do but gets his half-century 2nd of the series with his favourite sweep shot to the boundary off just 37 balls.

OUT! Bumrah is one bowler who has looked the one who will pick up a wicket and he does! Change of pace that bounces slightly more than expected taking the shoulder of the bat that goes straight to Jadhav

OUT! Chahal strikes again and he gets the massice wicket of Kane Williamson. Bowled it wide and the turn was taking it away, Williamson goes for the sweep ends it up edging it straight up and MS Dhoni pouches a simplest of catches.

OUT! Bowled'em! Chahal does the trick! Tosses it up, beats Munro in the air, the ball pitches turns into the southpaw and disturbs his furniture. Great time to pick a wicket

FIFTY! Another delightful stroke off Williamson's blade, waits and pushes through the covers giving the long off fielder a teasing chase. Brings up his 32nd half-century.

FIFTY! A single down to long on to bring up a superb half-century for Colin Munro, needs to bat long along with maintaining the run-rate, even if he stays for another 10 overs or so, it could give Indian camp a lot of headache

OUT! Poor shot selection from Guptill, he looked to go over the top of mid off on a ball that was slighly back of a length, ends up skying it and Karthik does well to run back and hold onto a smart catch.

OUT! Kohli reads the slower delivery and tries to send it over long off, but fails to connect properly. His counterpart Kane Williamson takes an easy catch at long off. Kohli departs for 113. Jadhav walks out at the centre.

OUT! There it is. The breakthrough for New Zealand. Rohit goes deep and tries to clear long off off Santner. But he fails to connect it well and holes out to Southee. A couple of New Zealand players congratulate the Mumbai batsman as he walks back amid a standing ovation from the Kanpur crowd. A terrific knock comes to an end. Hardik Pandya is the new man in.

New Zealand not jumping the gun in pressure game as Williamson decides to not tinker with the side.

India vs New Zealand, 3rd ODI updates: India hold on to a cliffhanger win by six runs and also take the series 2-1. What a thrilling ODI series we have had and fitting decider! Outstanding cricket from both sides. The Kanpur crowd have their money's worth.

Preview: Coming from a six-wicket victory, India will look to defeat New Zealand in the third and final One-Day International (ODI) to clinch the series at the Green Park on Sunday.

The series is currently level at 1-1, with the New Zealand taking lead in the initial match and the hosts levelling things in the second.

India will heavily rely on skipper Virat Kohli to lead the side from the front in the batting department along side opener Shikhar Dhawan, middle-order batsmen Dinesh Karthik and Hardik Panya who have looked in good nick throughout the series. In the bowling department, Kohli will fancy including wrist spinner Kuldeep Yadav in the playing XI, who belongs from the host venue to impose threat on the opposition. Yadav was replaced by Axar Patel in the previous match.

However, pacers Bhuvneshwar Kumar and Jasprit Bumrah will spearhead the bowling attack. Spinners Yuzvendra Chahal, Patel and Yadav along side all-rounder Pandya will look to apply breaks on the Kiwis batting in the middle overs.

New Zealand who started the series on a positive note will look to bounce back and clinch the series under the likes of experienced batsmen Martin Guptill, Kane Williamson and Ross Taylor.

Middle-order batsman Tom Latham who has proved his mettle in the series will be one of the key in the visitors batting.

In bowling, the Blackcaps will hope experienced pacers Tim Southee and Trent Boult to provide their side with early breakthroughs.

Spinner Mitchell Santner will be the key to halt the flow of runs for India in the middle overs.