All square at the end of second ODI. As we head for the third and the deciding ODI at Kanpur. This is living up to a fantastic series with both teams edging each other in the two contests so far.

Join us for the third ODI on Sunday. Should be a cracker of a game, as Kanpur's Green Park is set host its final ODI

​"Probably, this would be for the last time that the Green Park hosts an international match as the Lucknow stadium is far superior, and one of the best stadiums in the country"  said acting BCCI president CK Khanna

Goodbye and goodnight. Look forward for your company on Sunday.

Bhuvneshwar Kumar: That's my nature and I never try to change that. Whenever I bowl with the new ball, I try to swing it. It wasn't happening today, so I focused on bowling in good areas.Thanks to team management. I am not a muscular guy again thanks to trainer, but I am more confident if you compare it to what I felt a couple of years ago.

India captain, Virat Kohli: Pretty good game for us today. Exactly the way we talked at toss time. We needed a good performance from the bwolers today and they were clinical. Even the fielding was good. Dhawan has been playing really well. He's pretty confident at the moment. They (Bumrah and Bhuvi) are getting confident with each game that we play. They were not getting ugly wickets, but getting proper wickets. (On the third ODI) Definitely, I look forward to challenges, personally, and the team as well. We talked about bouncing back and we did that in Pune and plan to continue the momentum in Kanpur.

Kane Williamson, New Zealand: Yeah that's right. Whatever you do after you win the toss, you want to do well. I thought it was one of those surfaces that if you could get a score on the board, and then squeeze, but 230 wasn't enough. Credit to Indian bowlers. They showed the class. I think the surface wasn't easy to bat fluently, and he came on and played nicely. We certainly came with high hopes. Would have been nice to have had a few more to defend. We certainly came here with high hopes. We put in a much better performance in Mumbai. In for another decider.

New Zealand needed wickets to win the game or hope India to flounder, which happens very rarely nowadays, and today neither happened. A comfortable win. Both the teams lost 4-wickets while chasing and winning the game with 6 wickets.

Karthik finishes the game with a top shot through the offside and remains unbeaten on 64. MS Dhoni remains not out at the other end. All smiles for India as they level the ODI series 1-1. The batsmen complimented the efforts of the bowlers who really set up theis victory, holding Kiwis to 230.

So India have won the second ODI in the three-match series by 6 wickets. Dinesh Karthik sealed the deal with a crisp off drive, with Dhoni alongside. Fans are quickly leaving the stadium. With the series now level at 1-1, the third ODI turns all the more exciting. 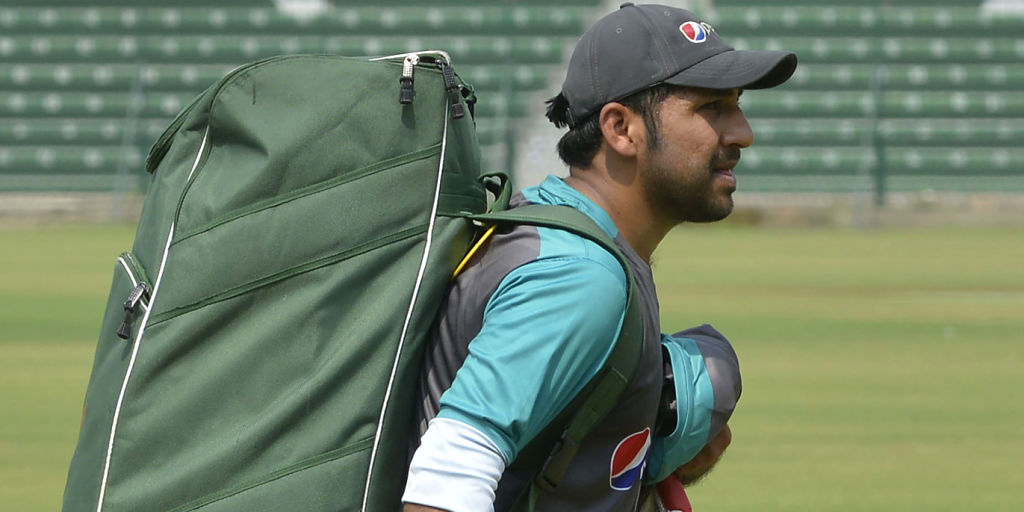 Many fans can be seen leaving the stadium now as the match is all but over now. This being a Wednesday, not a weekend, people are going early realising that they need to be somewhere in the morning tomorrow.. 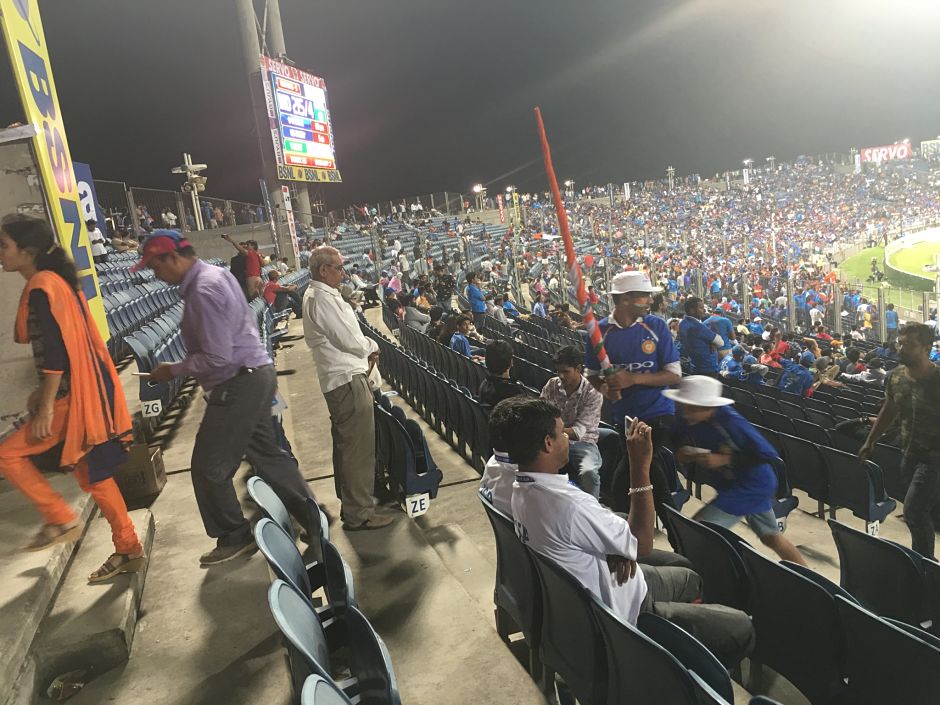 FIFTY! 9th half-century for Karthik in ODIs brings it with a spectacular cut shot of De Grandhomme. Innings of some substance and maturity, didn't throw it away, should finish the game off.

OUT! Dhawan stepped out to smash it over the covers, didn't get all off it as the bat twirled in his hands giving an easy catch to Taylor at cover. Unecessary shot to be honest.

FIFTY! Dhawan works one off his legs to notch his 22nd ODI fifty. He has played a superb innings mixing attack and caution in his knock. He needs to go on and get a big one here.

OUT! Grandhomme gets the big fish. Finds the outside edge and Kohli is walking. Grandhomme bowled it wide and Kohli goes after it, finds the edge and Latham does extremely well to hold onto a fine catch.
Virat Kohli c Latham b De Grandhomme 29 (29)

OUT! Rohit chips it off his legs but straight to square leg fielder. Soft dismissal. NZ have their first wicket

OUT! Straight through his defence! Bhuvi bowls a length ball and Nicholls looks to drive. The ball beats his inside edge and uproots the leg stump. Nicholls departs for 42.

OUT! The sweep has led to Latham's undoing. Axar changed the angle and darted it around leg, Latham misses it and gets castled.

OUT! There it is. The wicket the Indian team wanted. Pandya has broken the dangerous partnership. A ball before the wicket, Pandya asked whether he can bowl short. Given the permission, he did, and Taylor fell for the trap, edging it to Dhoni in the process. Taylor out for 21.

OUT! Yet again, New Zealand have lost their wickets early. Another 200-run stand in the making? Anyways coming back to the ball, Bhuvi unleashed his knuckleball and surprised Munro, who inside edged into his leg stump. Munro walks back for 10.

OUT! Bumrah bags the big fish. Williamson, from the start, looked tentative and that approach led to his downfall. Bumrah angled one on a length and Kane looked to clip it away only to miss it completely. He missed and the ball pinged him in front. The umpire raised his finger and Williamson opted for a review after a brief discussion. Two reds and umpire's call on impact: Williamson has to walk back. Huge setback for Kiwis.

OUT! A similar ball to the one which Bumrah bowled but Bhuvi managed to find the outside edge. An outswinger around off off-stump and Guptill goes to defend it only to edge it to Dhoni for 11. Williamson arrives at the crease.

Kuldeep Yadav left out, Axar Patel comes in as 'all-rounder'.

TOSS: New Zealand win the toss and opt to bat first at Pune.

India vs New Zealand, 2nd ODI updates: ​​​Karthik finishes the game with a top shot through the offside and remains unbeaten on 64. MS Dhoni remains not out at the other end. All smiles for India as they level the ODI series 1-1. The batsmen complimented the efforts of the bowlers who really set up this victory, holding Kiwis to 230 in the first innings.

Preview: After trailing 0-1 in the three match One-Day International (ODI) series, India will look to bounce back when the hosts take on a confident New Zealand in the second match at the Maharashtra Cricket Association Stadium here on Wednesday.

The duo contributed a 200-run stand for the fourth wicket as the visitors overtook India's total of 280/8 with six balls to spare. Apart for Kohli and Dinesh Karthik (37) no other batsman rose to the occasion. Many experienced players got a start but could not convert it into a big score.

Kohli also rued that the hosts fell 30 to 40 runs short and, in the coming match the hosts would like to improve in that department.

In the bowling department, apart from medium-pacer Hardik Pandya (1/46) no other player made the mark as they only managed to take four wickets. The spinners, who had done well against the Australians, also failed drastically.

India's bowling coach Bharat Arun said to level the series is a challenge and the team is ready for it.

"We look at it as a big challenge right now. New Zealand competed exceptionally well, they had a fantastic partnership (in Mumbai) and they went on to win that game," Bharat said.

"It is a bigger challenge for us to come back, we know we have our plans in place and it is a good testing ground for the team (on) how you come back from behind and do well in the series, he added.

New Zealand, on the other hand, has ticked most of the boxes in the first match. Their top-order batsmen clicked and the bowlers also did a good job. Experienced pacer Trent Boult (4/35) made his mark and the other bowlers supported him at the other end.

The visitors will now be aiming for a win again as it will give New Zealand their first bilateral series win in India, having lost all five preceding series while India will look to equalise.