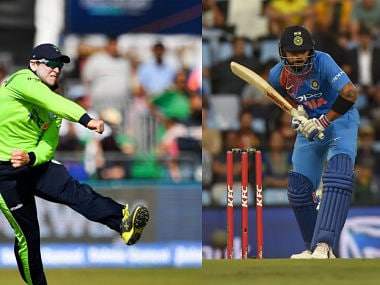 It's the Wrong'ún from Kuldeep, outside off, Rankin charges down the track and goes for a wild swing. He is foxed by the one that goes the other way and misses. Karthik clips the bails off calmly.

OUT! Sound of the timber. Chahal gets his third.

Nicely flighted on off, Thompson charges down the track and look to hit over the off side but is done in by the flight. He misses, the ball spins back in sharply and rattles the timber.

OUT! The eight wicket falls. Kuldeep gets his second.

It's flighted on middle and off, Dockrell looks to go downtown but doesn't connect it well and helps it straight into the hands of the long on fielder.

OUT! Kuldeep joins the party. Nicely tossed up on middle, spins back in sharply. Wilson gives himself room and ends up playing a nothing shot. Finds the stumps shattered.

OUT! Chahal gets his 2nd. Ireland in big, big trouble. Simi Singh departs.

It's a length delivery on off, Singh gets down for a sweep but misses and is hit right in front. The umpire raises his finger on the appeal.

OUT! Kevin O'Brien departs for a duck. Ireland are in deep deep trouble.

It's short outside off from Pandya, O'Brien stays in his crease and looks to pul but gets a top edge to third man where Kuldeep Yadav takes a very good catch.

OUT! Beauty from Chahal. Strikes in his first over.

Flighted on off, Balbirnie leans forward to defend but it spins away and shatters the timber. Perfect leg spinner.

OUT! Kaul gets his maiden international wicket. He was very close to not getting it though. A bouncer on middle and leg, Shannon looks to pull but is done in by the pace. He ends up miscuing it to extra cover where the fielder takes an easy catch. The umpires check for a No ball and replays show it was very tight. It looked as if he didn't have anything behind the line but the third umpire was happy with it.

OUT! Umesh has his revenge. Porterfield's stumps are shattered.

Porterfiled moves way across for a ramp sweep, Umesh sees it early and bowls it very full on middle. Porterfield is beaten by the pace and misses his scoop. The ball rattles the timber.

OUT! Umesh Yadav strikes off the second ball. Stirling is gone.

Good length delivery outside off, moves away a tad. Stirling slashes at it but gets an outside edge to first slip where the fielder takes a good reflex catch.

OUT! Kevin O'Brien gets his 3rd wicket. Raina departs after a well made fifty.

It's short outside off, Raina stays in his crease and looks to pull. But the slowness of the track means that he is early into the shot and he helps it straight into the hands of the deep mid-wicket fielder.

FOUR! FIFTY! Full on the pads from O'Brien. Raina flicks it wide of short fine leg to bring up his 50 off 34 balls. Four 4s and two 6s in his innings so far.

OUT! O'Brien gets second in the over. He sets off in wild celebrations. It's the slower one outside off, fuller in length. Rohit looks to drive but ends up hitting it uppishly to backward point where Stirling takes a good low catch.

OUT! O'Brien strikes first ball and he gets the in-form Rahul.

Length delivery outside off, it stops a bit on Rahul who looks to push it down the ground. He is early into the shot and ends up chipping it back to O'Brien who makes no mistake. O'Brien celebrates with hands outstretched as if telling the world he is the kind. He also can't believe it.

OUT! Peter Chase strikes first and it's KOHLI who walks back.

The short ball tactic has worked. It's short on middle, Kohli walks down the track, swivels for a pull but gets a top edge and Dockrell at fine leg pouches a very good catch.

So, that's it from us. Ireland were no competition to India and while we expected visitors to clinch the series 2-0, Ireland putting up no show in both the matches was least expected. But the challenge begins for India now. They fly to England now and play 1st T20I against Three Lions on 3 July. Of course, we will bring latest score and updates from the match. You already know the address - Firstpost.com.

Till then, take care and good bye.

Virat Kohli, India captain: Just the kind of momentum we wanted going into England series. Pretty happy to see such performance. I am having headache now whom to pick. Anyone who has been given chance has grabbed the chance with both hands. Guys are shining through coming off the bench as well. For us, opposition does not matter. Spinners are added advantage in England. It is going to be a good series. England are a quality side but we are going to focus more on our strength. System has been laid and benchmark has been set. We have mutual respect. Nobody takes anything for granted. The responsbility has been accepted by everyone.

Gary Wilson, Ireland captain: Disappointing to see we did not put up a fight. We know India like to chase. Wicket should not have made any difference if we had batted first. It is just disappointing.

Chahal: The wicket was a turning. I varied my pace and it came good. I was mixing the pace. I bowled quicker first and then tossed up. In our team, we have world class batsmen and you try and bowl them in the nets to know which deliveries work for you.

Yuzvendra Chahal is Man of the Series!

KL Rahul is Man of the Match

Rahul: It was important for me to make most of the opportunities. Coming into the series, had good amount of runs scored in IPL. If you played a couple of balls, you could get adjusted to the wicket. I used the pace of the ball well. I am in good form and tried to strike the ball well. The kind of team we have it is tough to find a position but whatever chance you get, you want to make most of it. I have never played in UK before and I know it is going to be challenging but I want to go out there and enjoy.

Bit of an embarrassment really for Ireland, they have been bowled out for 70 runs in 12.3 overs. You would expect them to make a stride forward in the second game, but this was two steps back. Never stood a chance after that poor start, especially against wrist spin.

India, meanwhile, were relentless in their pursuit and have made a mark in what can only be deemed as preparation for sterner tests ahead. That begins next week, Tuesday to be more precise, when two of the best limited-overs' outfits clash in T20I and ODIs. Can't wait already!

It's the Wrong'ún from Kuldeep, outside off, Rankin charges down the track and goes for a wild swing. He is foxed by the one that goes the other way and misses. Karthik clips the bails off calmly.

Another brilliant over from Chahal. And India are now on the brink of another massive win. Ireland have lost nine wickets. Chahal is not afraid to flight them and got Thompson with another flighted one. 3 runs and a wicket off it.

India vs Ireland, 2nd T20I, latest score and updates: A decent over from Kuldeep. He sent back Dockrell off the first ball and then gave away just three singles off the next four balls. Rankin then opened his shoulders and hit a six off the final ball to spoil a very good over. 9 runs and a wicket off it.

Preview: After comfortably clinching a win in the opening match, India will look to continue their dominant run and seal the two-match T20I series against Ireland when the two sides play the second match here at the Malahide Cricket Club Ground on Friday. India will be heading into the match on the back of 76-run victory in the opening T20I in Dublin. A terrific opening partnership between Rohit Sharma and Shikhar Dhawan and some smart bowling by the spinners saw India take a 1-0 lead in the series.

The openers shared a 160-run partnership and smashed 13 fours and 10 sixes between them.

Despite losing a cluster of wickets towards the end, India accumulated 208 runs for five in their stipulated 20 overs, setting Ireland a tough target of 209 runs to win.

In reply, Ireland kept on losing wickets at regular intervals, as India restricted them to 132 for 9 in 20 overs.

On a related note, after the Ireland series, the Kohli-led side will head to England for three-match T20I series, three-match ODI series and five Tests, beginning July 3.

Check out the live scorecard of first Test match between England and Pakistan being played at Manchester.

Raina further said that Dhoni has been a great brand ambassador for IPL and fans will see him in his best fighting spirit.