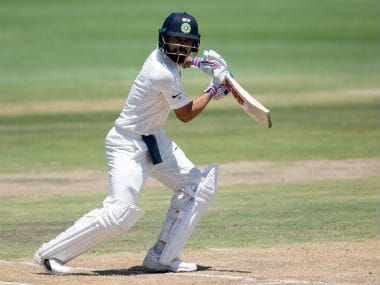 India close the first Day's play for 322 for the loss of six wickets.

Murali Vijay, Virat Kohli, KL Rahul and Dinesh Karthik all scored half-centuries, Karthik still unbeaten on 82, will have a chance to get a hundred tomorrow. Giving him company is Hardik Pandya on 33.

Good day's practice for India's top order. Shikhar Dhawan, Cheteshwar Pujara missed out big time, while Rahane did spent few minuties in the middle before he was dismissed. Lot to take from the Day 1. Catch us tomorrow as we begin our blog at 2:15 pm IST. As always it has been a pleasure.

Hardik Pandya's cameo burst has put India across 300 and it is looking a healthier total than it looked like earlier in the day. Overall, India will be happy with this batting effort and will look to declare overnight. Another 12 minutes of play remaining. Can DK get his hundred?

DK along with Pandya keep the scoreboard ticking as they complete 50-run stand for the 7th wicket. New ball taken!

DK along with Pandya keep the scoreboard ticking as India go past the 300-mark. Still a little over 2 overs left before the new ball is made available.

DK copies Rahul in text book manner... swivels and pulls for four... crack of the bat around Essex county club...

Hardik Pandya has stroked few of boundaries early in his innings. Dinesh Karthik is looking steady works the ball around for singles.He moves into 60s.

Rahul perishes in pursuit of a big shot
​
Rahul miscues one off spin... was looking to clear the boundary... end of a good innings which should get him into the first Test.

OUT! KL Rahul falls for 58. India lose their 6th wicket. Spinner Aron Nijjar takes the wicket. Hardik Pandya comes out to the center.

Karthik's form in England a big plus for the Indian side.

Fifty for DK... coming at 100-plus strike rate... looked in no trouble at all... motored along nicely. Seems a regular fit in the keeper-batsman slot.

OUT! KL Rahul falls for 58. India lose their 6th wicket. Spinner Aron Nijjar takes the wicket. Hardik Pandya comes out to the center.

FIFTY! Dinesh Karthik completes his half-century, moves to 53 off 51 balls. Played some really good strokes in his innings. Rahul and Karthik forged a 100-run stand as well.

India end the afternoon session on 201/5 after 56 overs. The visitors added 101 in the second session of play having lost the wickets Murali Vijay and Virat Kohli. KL Rahul and Dinesh Karthik stitched a solid partnership of 54.

OUT! Virat Kohli gone! caught by Varun Chopra at first slip off Paul Walter's bowling. He is dismissed for 68, India 147/5

Nips back from length... the left-arm bowler Walter hasn't bowled well... but he gets this one to come in after pitching... from behind the batsman seemed like it kissed Vijay's thigh pad before knocking back his off stump... but there was a large gap between bat and pad. And he's bowled for 53. KL Rahul is in now...

What a start for Kohli in red ball leg of this England tour India 131/3
​
Virat has back to back fours and half-century off 67 balls.... stupendous stroke making... if Anderson is preparing with a county game this weekend, Kohli is getting up the gears as well.

FIFTY! Murali Vijay raises his half-century with a boundary.

Lunch, Day 1: Murali Vijay and Virat Kohli steer India to 100 for the loss of three wickets after 28 overs.

The duo added 56 off 58 balls, has been a good counter attack. Will be an interesting second session and will be intruging to see once the spinners come to bowl in the afternoon session. Join us after the break.

OUT! Ajinkya Rahane gone! Matthew Quinn breaks the 39-run stand. Foster behind the stumps is having a good day as he claims his third catch. Captain Virat Kohli walks out to the middle.

OUT! Horror start for Shikhar Dhawan in whites. He is dismissed for a golden duck as he nicks one behind off Matt Coles' bowling.

India have won the toss and opted to bat.

Latest Updates:IND 322/6 after 84 overs at the close of play

Preview: India’s lone warm-up match ahead of their Test series against England Test series has been shortened by a day due to the ongoing heatwave in Britain, Essex chief executive Derek Bowden has said.

India will begin their match against Essex at Chelmsford later on Wednesday with temperatures expected to soar to a draining 30 Celsius, leading officials to truncate the fixture, which will now end on Friday instead of Saturday. Bowden dismissed the speculation that the quality of Essex’s pitch led the Board of Control for Cricket in India (BCCI) to curtail the match.

“The outfield is not unsafe and the decision has nothing to do with that. The reason the game has been cut to three days is because of the heat and the very busy schedule for the Test series,” Bowden is quoted as saying by the Telegraph.

“We had a meeting with the ECB, the BCCI this morning and agreed to cut short the match... “

India will travel to Edgbaston on Saturday to prepare for the first of their five-match series against England, which begins on 1 August.

The Test series is well poised for a showdown with the hosts winning the one-day international series after the visitors had clinched the Twenty20 tournament.