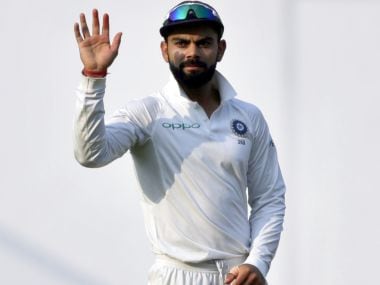 That's it from us in our coverage of the three-day tour game between India and Essex at Chelmsford. India will have taken several notes from this practice match, and have several things to ponder over in the days leading upto the first Test at Birmingham, including Shikhar Dhawan's form and the opening combination.

We certainly hope you enjoyed our coverage. Till we meet again. Goodnight!

It's started to pour here at Essex.

Yes confirmation... the game is called off... there was no point any way with Essex going through the motions... good work out for India to a great extent... a lot of questions answered in terms of batting, you would expect Dhawan is behind Rahul and Vijay now... pacers had a good running out... spinners continue to pose riddles but then that's what they do... overall, India will be relatively happy heading into the first Test... and that's coming quickly in five days' time... what a cracker of a series awaits us!!

Hand shakes in the distance... on the players' balcony... it looks like game over!

Would you believe it... its raining... and pretty hard... play stopped!!

Two @BCCI players have enjoyed their time at Chelmsford!

Dhawan has bagged a pair in the only warm-up game. India need to answer the toughest question in the first Test itself—The Opening Pair. #EngvInd

Just waiting for it to end!

Seems like energy has gone out of this game... Essex just going through the motions.

It's been three overs since the final session of Day 3 began, and Rahul and Rahane have helped themselves to four boundaries already! Meanwhile, India's lead stands at 113.

Ashwin warming up... for Edgbaston

One last session remains... Ashwin in the nets at the tea break bowling...

Rahul's unbeaten at the crease alongside Rahane, as India reach 53/2 after 15 overs at the end of the second session of the final day. Rahul will want to make the most of the start that he's got in order to send a message to the team management ahead of the Edgbaston Test.

Rahul smacks a couple of boundaries off Walter's bowling right after Pujara's dismissal off the first ball of the 14th over, as India reach 50 for the loss of two wickets. Meanwhile, Rahane gets off the mark with a single.

OUT! Pujara fails to convert a start

Pujara was starting to look good, having smacked five boundaries and appearing to make up for the low score in the previous innings, when Paul Walter snuffs him out in his third over, getting him caught by Chopra for 23.

Nothing shot from Dhawan... was confused by movement away and into him... and then gets bowled. Ducks in both innings here... has he put himself out of contention for Birmingham?

To be honest India didn't look like getting these tailenders out.

India will start with 36 runs in lead.

India would be looking to wrap things soon in the afternoon session and would aim to get some significant time to bat.

OUT! Ishant Sharma provides a breakthrough

New ball does the trick! Rahane takes the catch at gully and Walter's time is over. Ishant gets the wicket. Eight down now so you would think India will get to bat again today.

He is frustrating India now, especially hitting off against the spinners as he is and he is looking more comfortable with the bat than he did with the ball. Remember, he was dropped on 29* by DK off Shami.

Umesh has four! Brilliant take at second slip from Dhawan, diving to his right and holds it with both hands. Lovely away movement again from Umesh around the wicket and again, if there is a pacer playing his way into the eleven, it has to be him. India need to pick one of Ishant or Shami.

OUT! Umesh with a third wicket! Foster plays on and gets an inside edge into his leg stump. First wicket for India on day three and it has come from India's best bowler.

DROPPED! Walter dropped off Shami. DK couldn't hold on. Lovely away swing and drew the batsman forward and got the nick, but put down.

Ishant bowls the first over of the day

Ishant Sharma starts off proceedings for the day... needs a better start and spell today... too wayward yesterday and down the leg...

Latest Updates: Ind 89/2 (2nd innings) Yes confirmation... the game is called off... there was no point any way with Essex going through the motions... good work out for India to a great extent... a lot of questions answered in terms of batting, you would expect Dhawan is behind Rahul and Vijay now... pacers had a good running out... spinners continue to pose riddles but then that's what they do... overall, India will be relatively happy heading into the first Test... and that's coming quickly in five days' time... what a cracker of a series awaits us!!

Day 2 report: India were made to sweat by Essex who reached 237-5 on the second day of their tour match at Chelmsford on Thursday with their discomfort under sweltering sunshine compounded by fears over the fitness of key spinner Ravichandran Ashwin. Virat Kohli's team, playing their only warm-up match before the Test series against England gets under way next Wednesday, were dismissed for 395 after resuming on 322-6.

The home team then reached 237-5 at stumps after half-centuries from Tom Westley (57) and Michael Pepper (68).

Off-spinner Ashwin has played no part -- with just one day remaining on Friday -- after taking a knock to the right hand during practice.

Dinesh Karthik top-scored with 82 for India having failed to add to his overnight score while Hardik Pandya hit 51.

On Wednesday, Kohli scored 68 while KL Rahul (58) and Murali Vijay (53) also spent time in the middle.