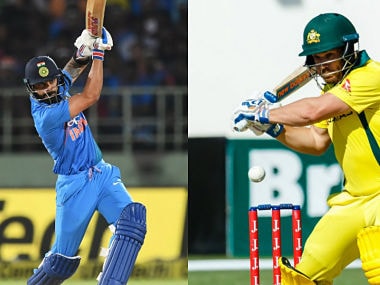 There were two completely different sides playing in this series. India, playing to experiment and test the bench. Australia, playing to come back to the winning ways. While the visitors' aim has been achieved by this thumping 2-0 victory, one wonders if Virat Kohli and the Indian management are sorted in their heads about their World Cup plans now.

There are still five ODI matches to go before the World Cup, the first match beginning on 2 March. It will give India the last chance to fix the loopholes and ascertain the World Cup squad.

We will catch you at the start of the first ODI between India and Australia on 2 March. Do follow Firstpost.com for latest news from the world of sports, LIVE scores, analysis of matches and much more till then. For now, take care and bye-bye.

Aaron Finch, Australia captain: I think winning against India is a special moment. Great innings by Maxwell. Zampa was a huge difference. We have been on a journey for the last 11 months, building a team for the World Cup.

Maxwell: Feels really good. We haven't had a lot of success here of late.To come over here and perform like we have has started it off well for us on this tour. It helps playing bulk of T20 cricket back home. Having confidence in my game also has helped a lot and it feels great to contribute to two special wins. It was pretty good wicket, we could afford to wait for the loose balls. We knew it was going to be little bit easier against the quicks. Especially after D'Arcy's dismissal it was upto me to stick around and drive the innings forward. Handscomb did a great job in giving me the strike all the time. We had a lot of chaos in the last game after the run out, but we corrected that tonight. We were able to keep the run rate in check.

Virat Kohli, India captain: Australia outplayed us in the two games. They deserved to win after the kind of innings Maxi played tonight. You never take any series lightly but we are not bothered by loss in some matches. But you always try and win every series. We wanted to give everyone a game time. We want to try a few things again. I will not analyse anyone in the two games. Good thing was that Bangalore wicket was back to normal. My knock does not really matter now because we lost the match.

Could this series win be a change of winds for Australia?

Super performance by Australia to win T20 series 2-0. Both were tough matches. Held their nerve, showed more ambition in the two run chases. Will pump them up for the ODI series

Ball 3: SIX! Low full-toss and Maxwell hits it over the long-on boundary for a maximum. Scores tied.

Ball 3: SIX! Low full-toss and Maxwell hits it over the long-on boundary for a maximum. Scores tied.

He takes a single and reached the third T20I ton. Does not celebrate. He wants to see his side through and clinch the series.

FIFTY for Maxwell. What a spectacular innings from him. Has surely booked his tickets for England for World Cup

OUT! Slower one from Shankar, a leg-spinner it seems and Short could not connect it, the ball flew up and Rahul caught it easily with two hands at cover. This is the wicket India were looking for. D Arcy Short c Rahul b Shankar 40(28)

DROPPED! Pant drops Short on 37, the batsman hit hard to the covers and Pant dived but the ball slipped out of his hand.

OUT! Shankar strikes for India and Finch is the man who has to depart. He too played the same short as Stoinis and got the leading edge off the bat. The ball went up in the air and to the cover fielder where Dhawan took the simple catch and did his typical celebration.
Finch c Dhawan b Shankar 8(7)

OUT! Terrible shot from Stoinis, that delivery from Kaul was targeted at off-stump and Stoinis tried to heave it to deep mid-wicket, misses it and the ball hits the top of off stump. India gets their first. Stoinis b S Kaul 7(11)

Couple of wides from Cummins to begin the final over before Dhoni holes out in the deep. Dinesh Karthik comes in and gets couple of important boundaries straightaway. Kohli fittingly has the final say and its a good one too, with a six off the final ball propels India to a formidable 190. Cummins' final over costs 20 runs, momentum with India, can their bowlers defend it?

OUT! Dhoni gets the height but not the distance. Finch remains composed to claim the catch. Dhoni miscues while attempting a huge hit down the ground. Cummins with the wicket. End of a fine innings from MSD

FIFTY! VK sets the Chinnaswamy ablaze with a quickfire half-century. He gets there with a single to deep mid wicket.

OUT! The dot ball pressure gets to Rishabh Pant and he pershies, but having said that, one has to applaud terrific bit of fielding from Richardson at the long off boundary. Brilliant diving catch. Pant slogs it straight down the ground, was a flat hit and Richardson hares to his left, throws his body and extends both hands to snaffle an outstanding catch

OUT! One of those contentious one for the TV umpire but with the soft signal being out, the third umpire couldn't find conclusive evidence to overturn the decision. We have seen this so many times in the recent past. Dhawan had struggled his way to 14 before he slices it on the offside, where Stoinis runs in from the deep, covers good ground and grabs a low catch. Another debate in the offing that will discuss and disect the catch

Toss: Australian skipper Aaron Finch calls it right and have decided to field.

The second India vs Australia T20I is being telecast on Star Sports Network. The India-Australia live streaming will take place on hotstar.com. Click here to know when and where to watch the second  T20I between India and Australia.

Preview, 2nd T20I: The focus remains firmly on the World Cup but India would also be desperate to ensure that a home series does not slip out of their grip when they take on Australia in the second and final T20 International here on Wednesday.

India are 0-1 down after an inexplicably poor batting performance led to a three-wicket loss in the lung-opener in Visakhapatnam. The below-par 126 with the bat on Sunday denied bowlers a decent shot at securing a win even though the Jasprit Bumrah-led attack did all it could to keep the home team in the game till the final over of the match.

India skipper Virat Kohli has already said that his squad composition for the World Cup in May-July is "more or less sorted" but has not ruled out rewarding standout performances over the course of two T20s and five ODIs.

Considering the captain's current frame of mind, both K L Rahul and Rishabh Pant are likely to feature in most of the games against Australia.

India rested opener Shikhar Dhawan to give game time to Rahul, who grabbed the opportunity with both hands by smashing 50 off 36 balls in his comeback game.

He had a disastrous Test tour of Australia before he and Hardik Pandya were provisionally suspended for their loose talk on women during a TV show.

The ban was later revoked though they still face an inquiry.

With the series on the line, it remains to be seen if Dhawan is brought back into the side to open alongside Rohit Sharma or the team retains the opening combination which featured in Vizag.

"Anything is possible now. We want to give game time to Rahul and Pant to figure out what we need to do in the World Cup," Kohli said after the first T20.

While Bumrah showed his class after coming back from a break, the other pacer in Umesh Yadav leaked runs and was not able to defend 14 in the final over.

India could replace Umesh with Siddarth Kaul or bring in all-rounder Vijay Shankar to beef-up the batting department.

The hosts played with a long tail in Vizag and that impacted their final total following an inexplicable batting collapse from 69 for one in the ninth over.

Pant, a strong contender for a World Cup berth, will be itching to perform after getting out cheaply on Sunday, and so will be Dinesh Karthik, who is left with just one game to make a compelling contribution before the World Cup.

All eyes will once again also be on Mahendra Singh Dhoni the batsman who struggled to an unbeaten 29 off 37 balls as India managed 126 for seven in Vizag.

He was able to silence his critics with a solid showing in Australia and New Zealand but his rather slow innings on Sunday has got the tongues wagging again over his waning finishing abilities.

Debutant leg-spinner Mayank Markande (0/31 in four overs) did not pick up a wicket but bowled well according to Kohli. The 21-year-old might get another game.

Australia, on the other hand, will be fancying a rare series win against India in recent times, especially after losing the Test and ODI series at home to Kohli's team.

They would be happy with their bowling on a slow surface in the first game but made a mess of the 127-run target after cruising at one stage.

Australia somehow got over the line but they know that India won't be serving the series win on a platter and will come hard at them at the Chinnaswamy Stadium.

Captain Aaron Finch would love to be back among the runs and the team will be expecting another blinder from Glenn Maxwell, who hit 56 off 43 deliveries in Vizag.

So far 121.94 crore COVID-19 vaccine doses have been administered across the country under the nationwide vaccination drive