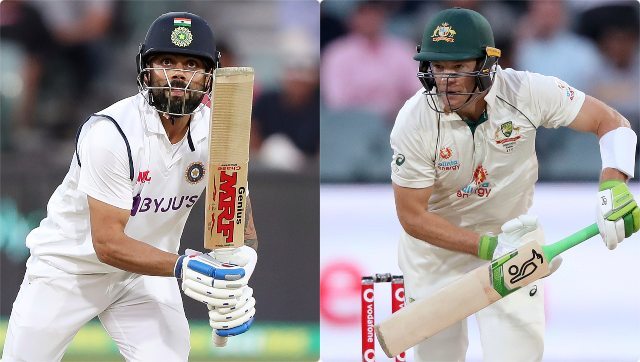 Well, well. The Test got over in like three days and two nights? Who would've thought this yesterday evening after play when India had the advantage. Stunning performances from Josh Hazlewood and Pat Cummins. Virat Kohli will now fly back to India. Huge responsibility on Ajinkya Rahane's shoulders. Team India will try their best to come back stronger in the rest of the Tests.

That's all for now. Hope you have enjoyed our coverage. Goodbye!

It was a bad day today no doubt but remember it's a 4 match series. We have bounced back in past and this team can do that too. #INDvAUS

India are swimming in problems!

Virat Kohli: "It's hard to put the feelings into words. Just collapsed completely. It really hurts. I think we didn't show enough intent when we were batting. It's something that needs to be reflected and learnt from. I have no doubt that the boys will reflect on this and will come back stronger in the next game. Mohammed Shami has gone for scans."

Australia captain Tim Paine is the Player of the Match

Paine: We were expecting a real dogfight right to the end. Full credit to our bowling attack again. Nice to get off to a good start. Chuffed with the way we bowled in this Test. Still a bit of work to do with our batting.

That's the winning the hit!

Six and fifty for Joe Burns!

What a way to seal victory for Australia! #AUSvIND pic.twitter.com/9ZLfC3f41r

What a day for Australia. Josh Hazlewood and Pat Cummins did a mind-bowling job with the ball in the first session. Indian batsmen simply couldn't cope against them and ended up with only 36-9 in their second innings. Australia needed 90 and they reached the target for the loss of just two wickets. Joe Burns remained unbeaten on 51. Australia take 1-0 lead in the four-Test series.

Burns goes for the pull, there's a catching chance for the fine-leg fielder but he spills it. Tough one. That's also a half-century for the opener. Well done, Aussies!

Labuschagne tries to speed up the victory but doesn't time his big hit. The ball goes high in the air and Mayank at mid-on takes the catch. Indians dropped a few in this Test but not this one. Steve Smith joins Burns in the middle.

Australia captain Tim Paine is the Player of the Match

Paine: We were expecting a real dogfight right to the end. Full credit to our bowling attack again. Nice to get off to a good start. Chuffed with the way we bowled in this Test. Still a bit of work to do with our batting.

Burns goes for the pull, there's a catching chance for the fine-leg fielder but he spills it. Tough one. That's also a half-century for the opener. Well done, Aussies!

Labuschagne tries for a maximum. Gets a top edge and the catch is taken. Wicket for Ashwin.  Labuschagne c Agarwal b Ashwin 6(10)

Nicely done by Saha who collects the ball after it hits Shaw on the leg. Wade is out of crease as he plays the shot after coming down the track against Ashwin. Wade run out W Saha b Ashwin 33(53)

Mohammed Shami took a blow on forearm from a short delivery from Cummins and has decided to retire hurt. This brings an end to India's innings. 36/9 is their lowest Test score. Australia need 90 to win.

Fifer for Hazlewood! Another brilliant delivery, outside off and Vihari went feeling for it as he edged it to the keeper.

Second wicket of the over for Hazlewood. Ashwin goes for a first ball duck. Another one of those deliveries which pitch in the corridor of uncertainty and takes the edge. Ashwin was pushing hard it. Hazlewood is on a hat-trick.

Defending has not worked and it seems like playing shots is also not going to work. This was a fullish delivery from Hazlewood and Saha chipped it straight to the short mid-wicket.

India lose to Kohli. The Captain departs after playing an uncharacteristic shot. He went chasing a wide fullish delivery from Cummins but ended up slicing it to the gully fielder as Green takes a low catch. Kohli wanted it to be checked but there's nothing to suggest the catch was not clean.

Second wicket for Hazlewood in the over and India are in deep trouble. Brilliant bowling this. This one was a bit fuller but it straightened just a bit to take the edge. Rahane was guilty of pushing hard without sorting his feet.

Hazlewood strikes with his first delivery of the day. Another back of length delivery but this was very close to Agarwal and squared him up to take the thick edge which Paine collected safely.

That was a ripper from Cummins. The pacer has been rewarded for his accuracy. It looked like just another one of those outside off back of length deliveries but moved away just a bit to take the edge on its way to the keeper.

Cummins removes the nightwatchman with some smart bowling. Bowled a bouncer and followed it up with a slower length delivery. Bumrah was not prepared for the slow cutter, pushed hard at it and chipped it back to the pacer.

India vs Australia 2020 Live score and latest update of 1st test at Adelaide: What a day for Australia. Josh Hazlewood and Pat Cummins did a mind-bowling job with the ball in the first session. Indian batsmen simply couldn't cope against them and ended up with only 36-9 in their second innings. Australia needed 90 and they reached the target for the loss of just two wickets. Joe Burns remained unbeaten on 51. Australia take 1-0 lead in the four-Test series.

Paine was left stranded on 73 not out when the Australian innings ended at 191 to trail India's 244 by 53 runs.

At stumps, India in their second innings were one down for nine with Mayank Agarwal on five and nightwatchman Jasprit Bumrah yet to score. The under-pressure Prithvi Shaw, who was out for a duck in the first innings, was bowled by Pat Cummins for four.

Fifteen wickets fell on the day which started when Cummins and Mitchell Starc took just 25 deliveries to knock off the final four India batsmen.

Australia in turn struggled to make headway as Bumrah, Ashwin and Yadav worked their way through the batting order.

"It certainly wasn't our best performance, but give India credit they bowled really well," said Paine.

"They put us under pressure and we just couldn't get any momentum or build any partnerships together. But anything can happen tomorrow.

"The main thing is to keep the scoreboard under control and hopefully one of our great bowlers has a bit of a run on and gets some momentum."

Even with India spilling five chances, they never allowed Australia to settle apart from a determined Paine who plugged on to his eighth half century, aided in part by being dropped by Agarwal on 26.

It was Paine's only misstep and he brought up his 50 off 68 deliveries with an assured cut to the boundary.

As his confidence grew he produced a reverse sweep to move into the 60s with a four off Ashwin.

After Australia took 28 balls to get their first runs on the board, Bumrah stepped up to remove makeshift opener Matthew Wade and the out-of-form Joe Burns for eight each before dinner.

Ashwin's spin captured the wickets of Steve Smith, Travis Head and debutant Cameron Green between dinner and tea with Smith, the world's premier batsman, facing 29 deliveries for his sole run.

In the final session Yadav snared Marnus Labuschagne and Cummins to expose the tail and joined Ashwin to take the final two wickets of Nathan Lyon and Josh Hazlewood.

Labuschagne survived long enough in the middle to be Australia's second-highest scorer with 47, but his wicket was always under threat.

He was dropped three times before his luck ran out after tea when he was trapped in front by Yadav.

It was a fruitful over for Yadav, who removed Cummins before he could score.

"I'm just so happy to be playing Test cricket again, it's been a long while, it felt like I was making my debut all over again," said Ashwin.

"Obviously Steve Smith was a big wicket, in the context of the game a very important wicket."

India's first innings wrapped up quickly on the second morning with the last four wickets adding just 11 runs in 25 balls.

But the tourists' problems started in the final session the previous day at 188 for three, when Virat Kohli was run out to spark a spectacular collapse which saw their last seven wickets fall for 56 runs.

Starc and Cummins, who shared the final four dismissals, were the pick of the Australian bowlers, Starc finishing with 4-53 and Cummins 3-48.

Hazlewood continues. Sundar has looked good so far. He is giving assurance to the dressing room that he has it in him at this level to survive. Just 1 off the over.