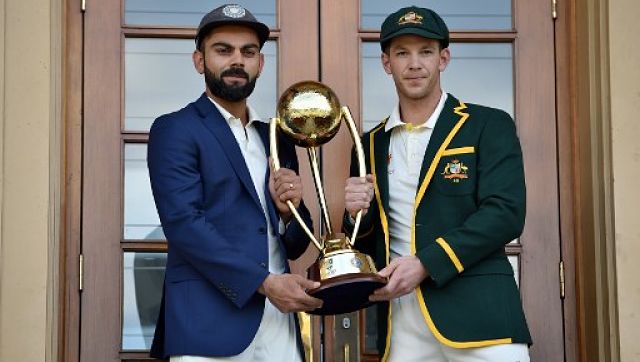 India vs Australia 2020 Live score and latest update of 1st Test at Adelaide: Team India take the advantage at the end of second day's action. The bowlers put out a good show today, ensuring Australia get bowled for 191 in reply to India's 244. The hosts total would've been a lot less if not for a fighting knock from their captain Tim Paine. Shaw failed again but Bumrah's batting stole the limelight in the final few minutes of the day. Australian bowlers need to come out good tomorrow if they want to snatch the Test. India will look to bat the entire day tomorrow.

So that's all for today. We will catch you tomorrow for another exciting day of Test cricket. See you!

Team India take the advantage at the end of second day's action. The bowlers put out a good show today, ensuring Australia get bowled for 191 in reply to India's 244. The hosts total would've been a lot less if not for a fighting knock from their captain Tim Paine. Shaw failed again but Bumrah's batting stole the limelight in the final few minutes of the day. Australian bowlers need to come out good tomorrow if they want to snatch the Test. India will look to bat the entire day tomorrow.

Rock solid defense from Bumrah against the mighty Pat Cummins. Yes, Bumrah's batting has improved a lot. He showed in the warm up game and he showed it now as well. So, that's the end of Day Two. India lead by 62 runs.

"The problem and the worry is his front foot's not planted."@RickyPonting talks Prithvi Shaw's first Test dismissals #AUSvIND pic.twitter.com/7Vo8ukUNyg

Mitchell Starc continues. There's movement for the left-arm pacer. Starc tries a yorker but Mayank plays it well. He pushes the final ball in the gap on the off-side and runs two. So Bumrah will be on strike the next over.

Well, well. Jasprit Bumrah is the nightwatchman. Shaw becomes a victim to his technical fault once again. He knew Aussies will be exploiting his weakness so he had to be very careful. But looks like he hasn't worked on this issue. Meanwhile, Bumrah survives five balls from Cummins. Well done.

Big gap between bat and pad and it's a very familiar dismissal for Shaw. Cummins strikes! Prithvi Shaw b Cummins 4(4)

Another close chance. The ball doesn't come to the bat, Mayank reaches out and almost hands a catch to the fielder at short mid-on. He is living dangerously. Good leave in the final ball. Probing over from Starc.

Pat Cummins to Shaw. Full and onto the pads, the batsman is watchful. Similar second ball, this time Shaw plays a confident push straight down the ground. The ball doesn't have the legs to reach the fence so three runs to the batsman. Cummins goes full, almost a yorker to Mayank. The batsman gets his bat to the ball and runs two. Cummins forces an edge off Mayank, Paine dives to his left but he misses it. That's a superb delivery and big reprieve for Mayank.

Starc starts off with an ordinary ball. Down the leg, Shaw just pushes it to fine-leg and gets off the mark. Mayank stays on the crease and blocks the next delivery. The fourth ball comes back in, hits the pads but definitely missing the stumps. Mayank does well in the over. Just one from this one.

Big gap between bat and pad and it's a very familiar dismissal for Shaw. Cummins strikes! Prithvi Shaw b Cummins 4(4)

Hazlewood edges it and it's a good grab by Pujara at first slip. Hazlewood c Pujara b U Yadav 8(10)

Ashwin does it again. Simple catch to Kohli at short mid-wicket. Lyon walks back to the pavilion.  Lyon c Kohli b Ashwin 10(21)

Ashwin continues after the drinks break. Paine takes a single off the first ball. Spin and turn, Lyon pushes the ball to fine-leg and runs two. He then tries a sweep and misses it. Ashwin wants to take the review and he convinces his captain. Hotspot shows ball kissing the bat before hitting the pads. Not out and Lyon stays.

Mitchell Starc goes for the second run but fails cross the line on time. Good throw from the deep by Prithvi Shaw. Starc run out (Prithvi Shaw/W Saha) 15(16)

What a ball from Umesh! It rises sharply, Cummins not in a position to play any shot. It takes an edge and a simple catch to gully. Cummins c Rahane b U Yadav 0(3)

Umesh Yadav with the big wicket of Marnus Labuschagne. The ball skids down, beats the bat and hits the pads. Umpire raises his finger. The batsman takes the review, he's not too sure. And it's three reds.  Labuschagne lbw b U Yadav 47(119)

Skipper Kohli pulls off a screamer at midwicket to dismiss Green. The ball was short and turning into the batsman as Green wanted to place it over the midwicket but the height made it difficult to hit it cleanly. Kohli, however, was alert and dived to his right fully to complete a brilliant catch.

Second wicket for Ashwin. The off-spinner is bowling brilliantly. Ashwin was able to spin it from around the wicket and that proved to be Head's undoing. With the angle coming in from around the wicket, Head was looking to play a shot on legside but the ball straightened and found the leading edge which Ashwin grabbed safely.

Brilliant bowling this from Ashwin, showing that an off-spinner can be effective against a right-handed batsman. He forced this one straight, there was no spin, and Smith was caught at the crease, opening up his body as the thick edge flew to Rahane at slip.

The umpire raises his finger again. Fuller delivery from Bumrah, hits Burns' pads and it's a successful appeal. The batsman takes the review,  it's umpire's call on hitting the wickets. Burns lbw b Bumrah 8(41)

Bumrah strikes! The umpire raises his finger against Wade but the batsman takes the review. All three reds so Wade is walking back to the pavilion. Wade lbw b Bumrah 8(51)

Bouncer to Shami and it's a simple catch to the forward short leg fielder. That's the end of the innings. Shami c Head b Cummins 0(1)

Umesh is done! Goes for the big hit, no timing on that one. The ball is high in the air and Wade takes a good catch. Starc with the wicket. U Yadav c Wade b Starc 6(13)

Another edge and another dismissal.

Saha chases the fuller wide delivery and edges it to the keeper. Starc strikes!  W Saha c Paine b Starc 9(26)

Third ball of the day and Ashwin nicks one to the keeper. Superb delivery from Pat Cummins. Ashwin c Paine b Cummins 15(20)

India vs Australia 2020 Live score and latest update of 1st Test at Adelaide: Team India take the advantage at the end of second day's action. The bowlers put out a good show today, ensuring Australia get bowled for 191 in reply to India's 244. The hosts total would've been a lot less if not for a fighting knock from their captain Tim Paine. Shaw failed again but Bumrah's batting stole the limelight in the final few minutes of the day. Australian bowlers need to come out good tomorrow if they want to snatch the Test. India will look to bat the entire day tomorrow.

Day 1 report: Ajinkya Rahane ran out his captain Virat Kohli after a horror mix-up, sparking a mini collapse to gift Australia an advantage over India after an intense opening day of the day-night first Test at the Adelaide Oval on Thursday.

Master batsman Kohli looked on track for a 28th Test century after knuckling down to steady the ship when he came in at 32 for two.

But in the final session of the day, Rahane pushed at a Nathan Lyon delivery and made to run, only to bail out, leaving Kohli stranded in the middle of the pitch after his battling 74.

It spoiled a fighting recovery from India who lost Prithvi Shaw to a fiery Mitchell Starc in the first over of the day and were struggling when Pat Cummins snared Mayank Agarwal.

To make matters worse, Rahane fell for 42 soon after and then Hanuma Vihari went for 16, leaving the visitors on 233 for six at the close and Australia in charge of the first Test either side has played since early in the year due to the coronavirus pandemic.

Wriddhiman Saha was not out nine and Ravi Ashwin unbeaten on 15.

Starc was the pick of the Australian bowlers with 2-49, with Josh Hazlewood, Cummins and Lyon all getting one each.

"We're very happy with where we're at, but still have a lot of work to do," said Lyon.

"Obviously he (Kohli) was batting extremely well so pretty happy with that one. Obviously a wicket like that, or a run out especially Virat Kohli, was massive."

A dogged Cheteshwar Pujara (43 from 160 balls) and Kohli had led the fightback.

Kohli, in his only Test before heading home for the birth of his first child, was fortunate to survive on five, nudging a short ball off bat-pad from Cummins' bowling, with Matthew Wade just failing to get his hands underneath the ball.

He also benefited from what appeared to be a blunder by Tim Paine opting not to review a catch behind, which replays showed may have come off his glove.

Undeterred, Kohli brought up a stubborn 23rd Test half-century with a single off Cummins in front of a coronavirus-limited crowd.

Twilight is supposed to be the toughest time to bat in a day-night Test with the ball zipping around more than normal, but Kohli looked untroubled until Rahane's meltdown.

"We were in a very good position," said Pujara.

"But I feel we are just six down, Ash can bat, Saha can bat, even our lower order will try and contribute as many runs as possible."

Lyon earlier got a big breakthrough by removing Pujara, whose 123 and 71 set up India for a 31-run